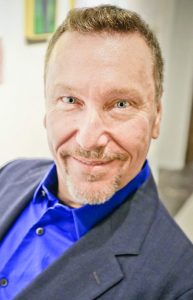 The Boyle County Chamber of Commerce has announced Jeff Jewel, of Oregon, as the organization’s new executive director.

Jewel replaces Paula Fowler, who left in late December after being director for 14 years. Myrna Miller has been interim director since that time.

On Monday, the chair of the chamber, Rick Waldon said an extensive search during several months brought in more than 30 candidates, but Jewel was the right person for the job.

“Jeff has a solid background in community service and chamber management having previously served as the executive director for the Cannon Beach, Oregon Chamber of Commerce.”

Miller said, “It’s a good fit because of his enthusiasm, his passion for work and passion for all of the things that he does. He has so much experience so many new ideas, and all of that can help our chamber … He’ll be one of the leaders in town.”

On Monday morning, Jewel was at work in the chamber office along with Miller and Walton, and beginning to get more acquainted with the town.

He said he was really excited to meet all of the chamber members and to get to know the community in general.

Jewel said the first few weeks he’ll be doing little talking and a lot of listening to what members think about what the chamber does and what they would like to see more of. This is something really important to him, he said.

“When you’re a member-driven organization, you’re there to serve the members,” Jewel said. “I look at communities in a whole, holistic way. We want to do everything we can to make Danville the best place it can be. And we’re starting with a really nice town, a really nice community. So it’s just a matter of improving what we’ve already got.”

Waldon said the chamber will be changing somewhat over the next several months.

“In a year when the chamber is going through a complete overhaul, finding the right person was critical and we think Jeff Jewel is the one to help us get there,” Waldon said.

Jewel said, “We’ve got such a nice ground under us already … Danville is a beautiful city with a lot to offer … Danville is already doing a good job, but I want to see how we can do even better.”

And ideas are already churning in his head. “Lot’s of ideas,” Jewel said. “And we’ll be sharing them as we develop them.”

Jewel was raised in historic Vincennes, Indiana. “It’s a lovely town,” and feels similar to Danville, he said.

So Danville already “feels natural” to Jewel. “I love Danville. It already feels like my new hometown.”

Jewel’s career took him to Austin, Texas where he worked on the chamber’s ambassador’s council for several years where he did a lot of business mentoring.

And Austin’s chamber was thriving — it was the ninth largest chamber of the United States in the 64th largest city.

“They did things right,” Jewel said.

Eventually he moved to Portland, Oregon where he worked with the Portland Development Commission, which is their urban development, re-development and economic development organization.

“It’s considered one of the foremost development commissions in the U.S.,” Jewel said. It is also known internationally.

“People from Scandinavia come (to Portland) to learn something about urban planning,” he said.

He added Portland’s urban planning and economic development, “stacked together beautifully. I learned a lot by working with them.”

Then in 2009, Jewel was named as Oregon’s Cannon Beach Chamber of Commerce executive director where he worked for several years.

He said that chamber also ran the city’s visitor’s center which had more than 100,000 visitors a year, but only about 2,500 year-round residents.

“We also had a thriving arts community,” including visual and performing arts as well as culinary arts.

Because Jewel wanted to move back to this part of the country due to managing elder care issues and being closer to family, the timing was perfect for him and Boyle County’s chamber to unite, Miller said.

Waldon said, “Combined with a vibrant and enthusiastic personality, Jeff will bring a fresh and unique perspective to the chamber and our community.”

Miller added, “People will be looking to him for leadership because he has so much experience and so many ideas. And he has a knack for getting people involved as far as volunteers and donations. He can get people involved, and then everybody will have a good time.”

“The chamber has found a Jewel!” Miller said laughing.

Flavors of the world

You know it’s going to be a evening stuffed with delectable foods from around the world when your place setting... read more