Coffee with Mimi: Soon to be ‘real’ spring 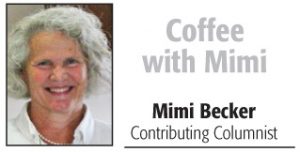 It was really beautiful. Eight inches of pristine snow covering everything. Light from yard and street lamps sparkling off perfectly coated tree branches. Every surface in the yard perfectly smooth with bright, white piles of fluffy snow.

Then morning dawned and reality hit. Beautifully covered tree branches dangerously bent over to the ground, in driveways, on porches and patios. Snow piled higher, and no longer a fluffy white, left at the base of the driveway by the snow plows dutifully scraping the main roads. Small puppies leaping around frantically searching for their spots.

In the best of all perfect worlds and days, it would have been tempting to hunker down with a second pot of coffee and a hot breakfast on a Monday morning. But reality hits and that pile of snow at the bottom of the drive simply must be managed and soon. The drive must be cleared. People have places to go and appointments to be kept. For the adults in our world, it isn’t a “snow day.”

I bundled up and trudged toward the bottom of the driveway with my shovel. I surveyed the task on the way down the little incline, which would certainly need to be cleared as well. I calculated I would be at it awhile. I wondered how much credit I would get on my step counting device. Consider the experience a workout and I would be checking a couple boxes on the daily “to do” list.

Sometimes, what we have envisioned is not what we see when we get there. The snow at the bottom of the drive is actually snow and standing, icy water. That’s an improbable combination, and a messy one.

I try to tackle new tasks with a reasoned approach. My life is full of new tasks since leaving the comfort of a 35-year education career. I try really hard to cover all the bases and not ignore logical steps in a job.

The snow at the bottom of the drive was a sloppy mess. I decided to just pass it over and go after the little hill. The snow was light and easily tossed to the side. I briefly noted that it wasn’t quite so pretty anymore, but now we are into the business of getting the day started. Aesthetics are taking a back stage to efficiency and Monday morning. I gave a fleeting thought to the potential positive exercise component of the job, until my shoulders started to ache.

But, wait. I could use the leaf blower to move that light, fluffy stuff from one place to another. We have a nice, long chord and an electrical outlet which is conveniently located at the front of the house. Sure enough, since I had not tramped around and packed the snow down much, it appeared this method would be just the plan.

Foot by foot, the drive was being cleared and blacktop was mostly visible, at least enough to permit safe, solid traction for the car tires. Soon, though, the effort wasn’t producing the same quick results. It turns out the snow will only blow so far and the arc of displacement from the center of the drive wasn’t large enough to get past the side of the drive all the way to the yard. So, I actually must remove the same snow twice in a kind of hip hop from the center to the side, to the yard and off the drive.

The leaf blower was a step in the right direction. Now, I needed to alter the strategy and use my tools differently to get the day moving. Aim the blower at a different angle. Move slower. (Some of that is a direct result of fatigue setting in, but actually it turned out to be quite effective.)

Leaf blowers are among the noisiest of yard tools. So, I was unaware that my husband and daughter were sitting in her car with the motor running, anxiously, but patiently waiting to head out. The car had been cleared and had been maneuvered carefully through the snow to be headed in the right direction when I was finished with the drive hill. Snow covered, flat surfaces were not an issue. Just go slowly and deliberately.

The job was completed in that a car could get out and back in. The week could get started, even if there was deep snow remaining on a large portion of the drive. Sometimes enough is enough.

I rushed in to assess my own delayed start to the day. Messages on the phone indicated I had three minutes to get to my first activity. I had ignored the clock through this whole driveway exercise. Other participants were on their way to the meeting which was being held as planned.  Now, I was scrambling and beginning to feel the effects of three hours of battling the elements.

Pulling out of the garage and down the mostly cleared driveway produced a feeling of satisfaction.  The effort had paid off. It may be a few days before town life was flowing smoothly, but we could come and go as we needed.

The main streets were clear, but there were no elves managing parking spaces and sidewalks. I sloshed and high stepped my way in and around, completed the task and headed back home in a matter of a couple hours armed with enough work material to manage the rest of the day, or days, should we be in for a long siege of delays and cancellations.

Everywhere, the roads were clear. Dangerously drooping tree branches were now upright and even sporting blooms and buds as if nothing was amiss. Many sidewalks were clear and easily negotiated. Some daffodil blooms were peeking above the snow.

At my house, where I had laboriously cleared enough of the night’s snowfall to allow safe passage and return of cars, there wasn’t a spot of snow on the hill. Not one bit of snow. The blacktop was clean as can be in very stark contrast to the extra snow piled on the sides. Even the flat areas of the drive directly touched by the sun and not at all by me were maddeningly clear.

I guess this is the place where I espose the “glass half full” philosophy. My daughter phoned, she was safely back in Louisville at her first appointment. None of my own appointments needed to be frustratingly rescheduled. The puppy was more comfortably roaming the yard.

It is March and it will soon be real spring.

Work-life balance on a snowy day at home

As a child, the prospect of a snow day was the most magical thing in the world. I can remember... read more