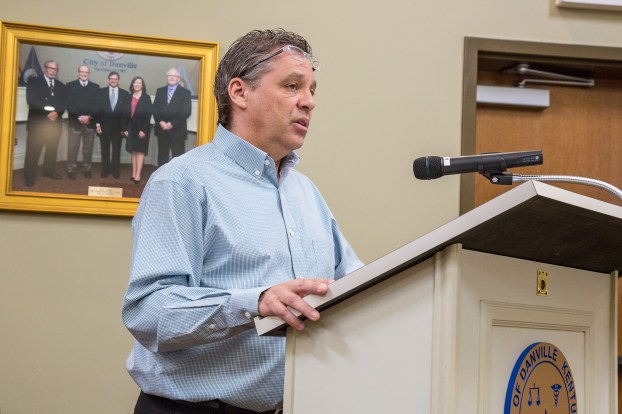 P&Z Director Steve Hunter speaks before the Danville-Boyle County Planning and Zoning Board of Adjustments Thursday. (Photo by Ben Kleppinger)

Last week’s Planning and Zoning Board of Adjustments meeting contained multiple examples of how local zoning laws could benefit from updates and streamlining, according to P&Z Director Steve Hunter.

The Board of Adjustments meeting featured a pair of public hearings — one for a conditional use permit for Walmart and one for building-height variance for a prospective business that wants to build a structure up to 150 feet high. Hunter pointed out what he saw as less-than-ideal rules and regulations creating hurdles for the businesses in both cases.

Walmart had already acquired a conditional use permit in October for a liquor store addition it plans to add to the northwest corner of its Danville store. But the company was back on the Board of Adjustment’s agenda Thursday because of a modification to the original plan.

“I don’t want to use their competitor’s name, but there’s another grocery store in town where you can order your groceries online and swing in there and pick them up … this is going to be a similar service that now Walmart offers,” Hunter said. “So that component bumps out the building another couple-thousand square feet. And again, it is really, really minor.”

Currently, a conditional use permit is required any time someone wants to construct a commercially zoned building over 50,000 square feet. And that requirement sticks to any expansions, Hunter said, regardless of how small they are compared to the total size of the building.

Hunter said he suspects the requirement was put in the zoning ordinance originally at a time when “big box” retailers were unwanted by many communities, and planning experts were coming up with different ways to prevent them from being built.

“We are working on a housekeeping amendment for the zoning ordinance, and that’s one of the cleanup items we’re going to try to address,” Hunter said. “That’s a little bit of a dated standard to some degree, and it seems kind of silly that we’re making folks come back here to get conditional uses and approvals like that when the buildings have been here for several years.”

The public hearing that consumed the bulk of Thursday’s meeting had to do with “Project Eagle,” a prospective $100-million, 275-job project that an unnamed business is planning to build — either in Danville or in one of a handful of other short-listed communities.

The Danville-Boyle County Economic Development Partnership had to seek a variance from the Board of Adjustments because of another zoning regulation Hunter has his eye on: Structures in the “industrial business development” (IBD) zone are not allowed to exceed 60 feet in height unless they get a variance approved. The Project Eagle company needs to build a 150-foot structure, requiring a 90-foot height variance, which the board ultimately approved.

The EDP’s attorney, Winfield Frankel, argued the 60-foot limitation “is kind of unique around Kentucky.” Hunter has similarly stated he hasn’t seen similar height limitations elsewhere in the state.

Why does Danville-Boyle have such a restriction in place? Hunter could only speculate and offer a similar explanation to the restriction affecting Walmart’s project.

“It was clear to me in 2004, we wrote a new ordinance with a consultant, and there’s a lot of techniques and terms and processes and standards that let me know some land-use planner similar to me came in and wrote a brand new, ‘cool’ ordinance for Danville,” which included all the trendy ideas in planning and zoning at the time, Hunter said.

Danville-Boyle’s zoning ordinance also has a height restriction of 35 feet for residential, even though most three-story multi-family apartment buildings come in around 42 feet high, he said.

“We’ve got height standards all over the book … that just don’t work for how you build apartments, how you build retail, how you do industrial in modern times,” he said. “If your town is interested in growing in all those areas, it seems rather restrictive to me that we have these height requirements, as well as these (square-footage) caps and several other techniques that I’ve seen … that clearly need to be thought about and either kept or put aside for the future.

“But that’s why I think they’re in there — because a consultant came in and put every technique at that time in play into our book.”

Hunter also has designs on changing how nearby property owners are notified when someone is pursuing a zone change, a variance or other matter through P&Z.

The notification issue came up because of where the potential Project Eagle site is located. The Project Eagle property sits on the west side of Norfolk Southern’s rail line in south-central Danville; on the east side of the tracks, there are a large number of residential properties.

None of those residential properties were notified by letter of the EDP’s application for a building-height variance because they don’t technically border the property in question. Norfolk Southern owns a thin strip of land around its rail line all the way down the east side of the Project Eagle property, meaning the railroad is, by the letter of the zoning ordinance, the only neighbor on that side, Hunter said.

The lack of notification didn’t sit well with some who live in the affected area. One resident who spoke at the public hearing said she represented 80 homes on Saddle Ridge Circle, toward the southern end of the Project Eagle property.

“While we’re not against what is happening here, we’re afraid of it,” she said, rejecting the idea the Project Eagle property is in an exclusively “industrial neighborhood.”

“I understand that it wasn’t required that the neighbors be informed; I think it was morally wrong for us not to have been told,” she said. “Because something is legal doesn’t mean it’s necessarily right.”

Hunter said he thinks the criticisms about notifications brought up at the meeting are “fair — very fair.”

P&Z followed the law in the case of the Project Eagle variance, as did the applicant, the EDP, he said. But he said he’s seen the adjacent-property rule for notifications abused in other cases in other locations.

“We used to call them ‘hate strips’ back in the day … they’ll just plat off a strip of 50 foot … and then they’re the adjacent property owner to their own project. Or they’ll buy a property — I’ve seen this happen, and then the neighbors are frustrated because they don’t get a letter,” Hunter said. “What I’d like to do in the zoning ordinance amendment is … maybe we’ll set a standard that’s adjacent or (within) 1,000 feet, whatever catches the greater number. I’ve always thought that we want to notify — that’s the whole goal is to get folks at the hearing.”

Hunter said there could be issues with 1,000 feet and suggested the idea needs more fine-tuning before it could be implemented.

A Children’s Place will stay open to Aug. 31