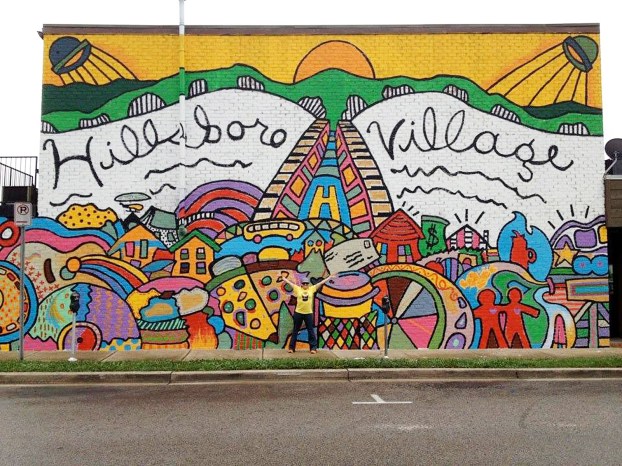 Photos courtesy of Andee Rudloff/chicNhair.com An example, above, of a mural by Andee Rudloff, pictured below, is seen on the side of a building in Hillsboro Village, a neighborhood near Vanderbilt and Belmont universities in Nashville, Tennessee. The Heart of Danville got approval to proceed in the process of commissioning Rudloff to design and paint a mural, with the help of the community, on the side of the Raggs and Derby Shoppe building at 126 North Third St.

State of the art

Following a debate about what style of mural is appropriate for a public art display in Danville’s historic downtown, a large, vibrant mural is one stroke closer to embellishing a blank wall in that area.

At the regular meeting of the Danville Architectural Heritage Board Wednesday morning, Nick Wade, executive director of the Heart of Danville, presented a request for a certificate of appropriateness for the installation of the mural at 126 N. Third St., which is the exterior side wall of Ragg’s women’s clothing store, attached to the Derby Shoppe, in the building owned by Martha and John Caywood facing the parking lot and Chase Bank’s drive-thru branch.

Wade said the HOD has Andee Rudloff, a nationally-respected mural artist from Bowling Green, interested in creating the 60-foot-by-20-foot mural, but needed the AHB’s approval before going forward with the $7,500 project. 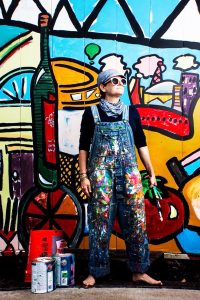 Mural artist Andee Rudloff has more than 20 years of experience and has undertaken mural projects in Montana, Michigan, Ohio and Tennessee, as well as Kentucky.

Once the theme for the mural is decided on and the artist is under contract to create it, Rudloff will be soliciting community feedback about what specific content should be illustrated — things that make Danville unique.

After a motion was made to approve the request, a debate began when board member Dana Dixon said, “I looked at a whole array of this artist’s work and it’s lively and bright and I’m sure a lot of people are going to think it’s going to be very cool. And I do too, except I think it should be somewhere else.”

Dixon said she would rather see some other style of artwork in that space because it’s right in the middle of the historic area.

“It seems a little juvenile for Danville. It just doesn’t seem right to me,” to be in that area, Dixon said. Then she asked Wade if there were any other buildings further away from the historic district that it could be placed.

Wade said no, but the Caywoods are very supportive of the project.

“It’s just that this style in this space seems inappropriate to me,” Dixon said.

Wade said the mural would set a precedent, due to it being a certain style displayed in the historic area. “If you don’t like it when the project is done … we will have to re-evaluate the entire thing, look at another artist that suits your style better for finding another location.”

Danville business owner, Kirby Stafford, who creates custom signs, spoke to the board and said he agreed with Dixon on the artist’s style and the appropriateness of it being in an historic area.

“I have a sign business in town and do a lot of graphic painting,” which is why he was interested in this project, he said. “The design is juvenile, as she said. I look at it like a coloring book,” Stafford said.

Board member John Bowling asked, “Are we up here going down a path that the next applicant comes in and wants to put the crucifixion on the wall or something that we don’t agree with … are we going down the wrong road?”

Joni House, preservation coordinator for Danville, said, “It’s not so much that you’re going down a wrong road, but you are going down a road. Because once you make these decisions, they will affect every other artist that comes in front of you.”

Board chairman Tom Tye said a lot of issues and questions were being discussed concerning the board’s authority on what to approve or deny when it comes to public art.

“This is the first step of a process we’ve never gone down before,” he said.

“Public art is a process,” said Kate Snyder, director of marketing and development for the Community Arts Center who also addressed the board. “This is definitely something that’s hard and it’s new territory because of that question of how relevant is our own personal opinion about the artwork to these conversations. I would argue that it’s not really particularly relevant because art is so incredibly subjective …”

Snyder said, “Personally, I don’t like the Walking Dead mural in Florence. It’s not my thing. But I would certainly never suggest that it shouldn’t have been put up or that it wasn’t done well.”

House said, “I think everybody is hung up on the content.” She stressed the art’s content and compatibility with the “fabric of the district” is addressed in the board’s guidelines for public art. “I strongly advise to look at the design guidelines to make that decision.”

Dixon said not everyone will like the mural, “but that’s not the problem. I think what we need to consider is that this represents our community. So we are looking at our overall impression that we want to project into the world.”

When speaking to the board, Martha Caywood said when they were approached about the project and were shown some of samples of the artist’s murals, “We were very much in favor of it. We didn’t consider that we needed to be artists to decide this, so we gave it our full approval.” 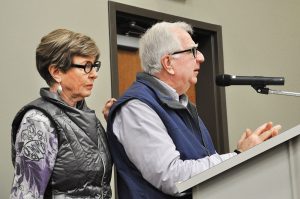 Martha and John Caywood own the building where the Heart of Danville will be installing a commissioned mural by artist Andee Rudloff, of Bowling Green.

John Caywood said the HOD asked them to be a part of trying to help the downtown, “…which is what we’ve always wanted to do, and we try to participate… We just kind of offered the space and if that helps downtown, we’re glad to help out.”

The board eventually approved the mural’s location with the understanding it will also approve Rudloff’s final design before installing it.

Voting for the project was Tye, Bowling, Vaughn Frey and Mary Girard. Dixon voted against the proposal.

According to a letter attached to the Heart of Danville’s certificate of appropriateness submitted to have a mural painted by Andee Rudloff on the side of the building at 126 North Third St., Rudloff will work with HOD to solicit community feedback into the theme and specific content for the mural.  She will paint outlines of the image, then the public will be invited to participate in a “community painting day” to help fill in designs. Rudloff will complete it with any touch-ups needed. 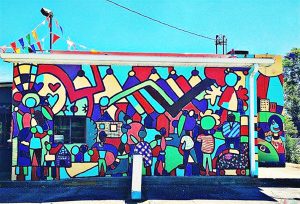 Rudloff’s preference to include the community in the creation of her murals is one of the things that appealed to the HOD about her and was a key factor in her selection. “Community involvement will enhance community support for the project and increase the ownership felt by the public,” HOD stated in the letter.

Question: Dear Mr. Sampson, it’s nice to write to you. I am 9 years old and with the help of... read more