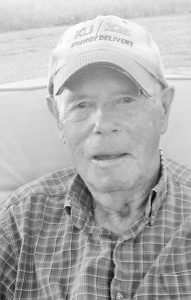 Born December 30, 1927, in Garrard County, Paul was a son of the late William and Maggie Ray Black. He had been a lifelong farmer, an employee of the Water Plant for 22 years, National Casket Factory for 17 years and also worked for the Division of Forestry. Paul was a Mason, a Shriner, a United States Army veteran during the Korean War era, and a member of First Presbyterian Church of Lancaster.

In addition to his parents, he was preceded in death by a son, Jefferey Lee Black; a brother, William Kenneth Black; a sister, Virginia Heuser; and a grandson, Jared Grubbs.

Funeral services will be held at 11:00 a.m. Friday, March 23, 2018 at Ramsey-Young Funeral Home, with Revs. Michael Denny and Vola Brown officiating, and burial with military rites at Lancaster Cemetery.

In lieu of flowers, contributions may go to Heritage Hospice. Friends & family may share memories or leave condolences on his tribute wall at www.ramsey-young.com.

Ramsey-Young Funeral Home is in charge of arrangements.