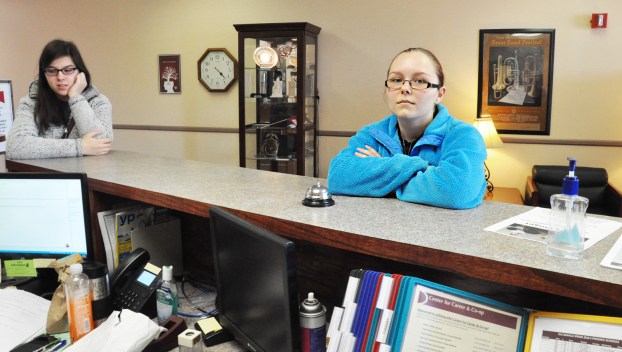 Mersadies Hasul, left and Courtney Griffieth are standing in the front office at EKU Thursday after learning of the school's closing in May. Hasul is a senior and will be graduating in May but Griffieth is a sophomore and will be looking for alternatives to completing her degree.

After 24 years of helping area students earn their college degrees, Eastern Kentucky University has announced it’s closing the Danville campus at the end of this semester — May 11, the last day of finals and graduation day, the university announced Thursday.

The closure is due to “ongoing budget reductions,” according to a news release issued by EKU. 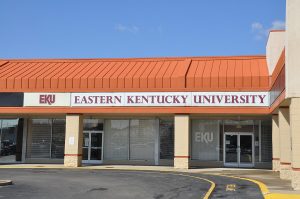 Eastern Kentucky University Danville campus in the Danville Manor Shopping Center is closing at the end of this semester. May 11 will be the last day of finals and is also graduation day in Richmond.

Only 20 minutes after reading an email informing Danville students about the closure, sophomore Courtney Griffieth from Harrodsburg was leaning on the front counter at EKU’s regional campus in the Danville Manor Shopping Center.

“I’m here trying to figure my life out,” Griffieth said. She’s enrolled in the criminal justice program, works part-time and is a volunteer firefighter.

Being able to pursue a degree while living at home and working in her community has been something Griffieth found rewarding.

Saving money by not living in a dorm and paying for a meal plan at the Richmond campus has been beneficial.

Also not having to commute is a great advantage to going to school in Danville.

Griffieth wondered how she was going to be able to earn money, volunteer with the fire department and continue her education if she has to drive every day.

“When are you going to have time to study and do your homework when you’re driving?” she said.

“They are young adults. What they are looking for in the student experience is very different from someone who wants to go to football games on a main campus on Saturdays and partake in all that social activity, which is fine,” Peck said. “But our students are just at a different place. Some of our students already have a young family. They may have parents or grandparents they’re taking care of in addition to having a job. They just seek a different student experience. It’s not subpar at all. It’s just a different focus.”

Peck said she is a graduate of EKU and has worked for the school for 23 years. “I know these students. Many of them won’t be able to drive to the Richmond campus. Many of them will just stop, and those are students I’m really super worried about.”

Mersadies Hasul of Stanford will be graduating in May, so the closure won’t affect her like it will many of her classmates.

She said her first reaction to EKU closing in Danville was anger. “I was angry because I know how hard everyone here has worked for the programs and how the programs here have reached out to so many people.”

Hasul talked with several of her friends who aren’t close to graduating yet. She said a lot of them don’t have the time, resources or financial aid to attend classes in Richmond. When you’re working 40 hours a week and carrying a full 18-hour course load at school, having to drive back and forth to Richmond is too much of a burden for many students, she said.

Faculty member Cory BlackEagle said he was shocked when he received the email Thursday announcing the closure of EKU regional campus.

“I’m very disappointed, but not for the reason you may think … My first reaction is, ‘What about the students?’ The students that I know on this campus are here because of family obligations, work obligations, other critical life obligations (that) make it difficult or financially difficult to travel to Richmond campus, but they still want an education,” BlackEagle said. “I think it’s going to put students in a very, very, very difficult position. If you have invested in your education at EKU, whether it’s for a semester or you’re a year from graduating, you either have to figure out what you can afford in terms of money or time, to travel to Richmond. Of if that is just not possible, you’re going to have to transfer to another school. I can’t imagine either decision is going to be comfortable for students.”

Peck said the decision for closing the Danville campus was made due to several reasons: huge pension contributions; not owning the building the college is occupying and having to pay a high rent; and not being in an Appalachian county.

Peck said one of the missions EKU has is to serve people in the Appalachian area, but since Boyle isn’t considered part of that area, EKU isn’t able to receive federal grant money to sponsor programs, such as tudoring and career counseling.

Therefore, it is just more expensive to maintain the local campus, she said.

Hasul said two of her friends will be transferring to another college because they don’t like online classes EKU has offered. “It’s a lot harder for some people to focus that way,” she said.

Hasul said she, like many of the students at EKU in Danville, works 40 hours a week and takes a full 18-hour class load at college. She said the drive to Richmond would be too much of a burden.

“I just got official word on it that it is closing. That’s a real loss to our community,” said Harold McKinney, judge-executive in Boyle County, Thursday afternoon. “It has made available to some people who otherwise could not get in their car and drive to Eastern … the opportunity to pursue a four-year education and to do so in their hometown or very close to their hometown.”

McKinney noted the elimination of campus staff would result in the loss of some payroll taxes for local governments, “but the bigger loss of course is the educational opportunity for the people in our community.”

Danville Mayor Mike Perros said EKU is dealing with tough economic realities, just like many others.

“You never like to see anything like that happen, but with all the budget cuts that are occurring at just about every level, everyone is having to redirect their resources and their efforts. If this is the part of their operation that wasn’t economically attractive to them, I understand their efforts. However, I don’t think for one minute that EKU has forgotten about Danville-Boyle County,” he said. “I think they know how important this community is. And I think they’ll continue to offer some type of services here. … How they do that remains to be seen.”

Perros said EKU has always been “a great neighbor” and provided valuable resources for the Danville community.

“I don’t see any other institutions filling that hole. And the folks that were enrolled there obviously have got some choices they’ve got  to make. And none of those choices are going to be as convenient as what they had,” he said. “… I wish (EKU) nothing but the best in their future endeavors … we would enjoy partnering with EKU at any time.”

“EKU has been honored to provide access to our degree programs for students in the Danville community and surrounding counties for more than 20 years. We sincerely hope the students currently enrolled at the Danville campus will continue to pursue their education at Eastern, either through EKU Online, or at another EKU campus,” said Dr. Ryan Wilson, senior director of regional programming, in a release announcing the closure issued by EKU Thursday afternoon. “We will launch a rigorous advising schedule to assist students in their transition to another delivery method. We are grateful to the students and community partners who have supported this extension of EKU, and we thank the faculty and staff for their dedicated and continued service to this campus. Danville and Boyle County are a valuable part of our service region, and we will continue to discuss opportunities for future partnerships with this community.”

According to Peck, there are currently 140 students attending EKU’s Danville campus, while 225 are dual-credit students, who are taking online college classes while still attending high school. She said the college employees eight full-time and six part-time faculty.

Students with questions can contact Cindy Peck at (859) 622-6736 or cindy.peck@eku.edu, according to EKU’s release.

“I wish we could continue to serve them.”