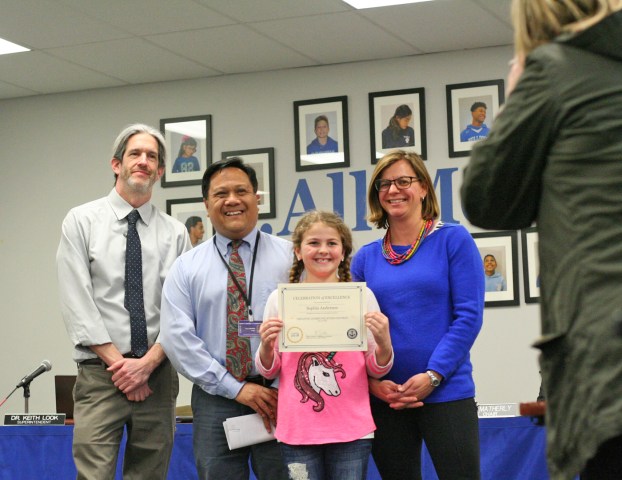 Kendra Peek/kendra.peek@amnews.com Sophie Anderson, third grader at Mary G. Hogsett Elementary School, was recognized during Monday's Danville Board of Education meeting for being one of the top 10 in a nationwide poetry competition for kindergarten through third graders. During the meeting, Anderson, center, posed with, from left, Superintendent Keith Look, Hogsett Principal Leo Labrillazo and Board member Lori Finke, for a photo taken by District Media Coordinator Kelly Bedtelyon.

Sophie’s poem is called, “The Lonely Poem,” which she said talks about two different ideas: a new student who is both ignored at her new school and also forgotten at her old school. 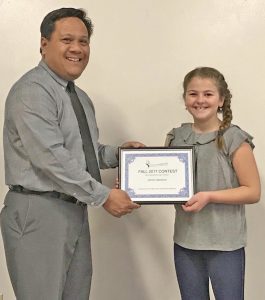 On Friday, she learned from Principal Leo Labrillazo she had been selected for a contest held by Creative Communication.

The poem was selected from thousands as one of the top 10 in her kindergarten-third grade division, according to a release. The national competition is open to students through the ninth grade.

Sophie was the only student from Kentucky to win.

As one of the top 10, Sophie will receive $25 and a complementary copy of a poetry anthology including her work called, “A Celebration of Poets.”

Poems are selected for their literary merit, creativity and social significance, according to the release.

Sophie said the poem came about because her teacher, Ashley Roach, gave students a chance to write anything.

“I just wrote this random poem,” she said.

Roach liked the poem, Sophie said, and made no changes to it. Together, they submitted it to a few poetry contests last fall.

Sophie said she’s not really sure where the idea for the poem came from. Sometimes her writing is like that, she said.

Sophie said it was a little hard to remember what the inspiration was for the poem since “it was a couple of months ago.”

“I think what I imagined, when writing this poem, was this girl going to school — I’m not sure if this is how I felt — and she was a new student,” Sophie said. “I don’t think that’s what I was feeling, because it was a fun time.”

Her mom, Jenny Anderson, said Sophie is good at empathizing with what other people were feeling.

“I think you can easily imagine what it’s like to feel all those feelings,” Anderson said to Sophie.

Sophie said its important to her to mention Roach, her teacher.

“She didn’t get recognized at the board of education meeting … She cares so much about everybody,” she said.

Sophie also enjoys singing. She’s currently practicing with a classmate and others in the school for an upcoming performance at the school. Outside of school, Sophie’s part of the Danville Children’s Choir, participates in the art and soccer clubs and takes dance classes.

Some day, she wants to become a fashion designer and also act and sing.

She said she wants to be less nervous on stage, because she gets shy in front of the crowd.

Sophie’s the middle of three girls — her younger sister is Josie, 7, and her older sister is Abigail, 13.

Her dad — Sophie calls him “Babbo” — Kyle Anderson, writes for his work at Centre College. She said they don’t always agree on their style.

“I felt proud when he complemented me,” she said, about the poem.

Sophie is already planning how to spend her prize money, Anderson said.

“Mrs. Roach wants me to save it,” Sophie said. “I want to spend it. I think I’m going to buy ‘Mad Libs.’ I’m going to stick to that until I find something else I want.”

She said it was pretty cool to win.

“Mine wasn’t one of those really long poems. It was just a few short lines,” Sophie said.

She’s already thinking about what to write next.

“The Lonely Poem,” by Sophie Anderson

There are many faces in the hall.

No one remembers me at all.

I try to make jokes, laugh, and make friends.

But no one will lend me a hand.

I try to call old friends at home.

But it seems like no one is able to pick up the phone.

I feel so lonely, I feel so small.

Is it just me or am I nothing to nobody at all?

Local governments and schools in Boyle County could wind up paying a combined total of more than $1.85 million in... read more