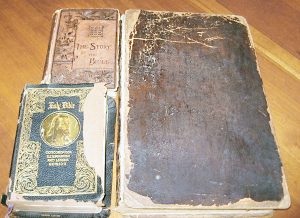 Question: Jerry, do you have any ideas about what to do with old family Bibles? I have eight of them from both sides of my family, from 1793 to the mid-20th century. None of them are in very good condition. Most contain family records. My great-grandmother penciled notes on many pages of her 1884 “Story of the Bible”, a simplified version.

These are three of the oldest. The big one came from Scotland with my grandparents when they immigrated to America in the early 20th century. I’d feel like a traitor throwing them away, but I doubt any of the young people will want them. They are wrapped in linen tea towels and kept in a trunk. Advice please!

Answer: Gosh, this is a question that I get asked a lot. But its answer bears repeating. I have to say that about 99.9 percent of the time, most family Bibles have little intrinsic value. One factor is that there are just so many printings and they have been printed for so, so long.

There are only a few times Bibles have a real value. One is, if they are very early. No, 1884 is not early and even Bibles from 1784, by some scholars or collectors, aren’t considered early. By early I mean Bibles  printed in the 16th and 17th centuries or earlier.

Bibles are are incunabulum, that is Bibles or books that were printed, especially, before 1501, are considered valuable or at least collectible. Many of these incunabulum Bibles are illuminated, meaning they have delicate, hand-drawn and colored illustrations in them. These are valuable in their own right.

As you can expect, these books are harder to find than the mass printed Bibles of the late 19th century.

The second type of Bible that is valuable is one that was owned by a famous person. A Bible that belonged to George Washington, Harriett Tubman or John F. Kennedy will have a value based upon its celebrity ownership.

In the appraisal business this is called a Characteristic of Value. The sky is the limit on this one. It just depends on how badly someone wants it.

I have found in the case of celebrity ownership, genealogy and notes may have some value, but in most cases, if it’s just an average Joe, the notes and genealogy is of importance only to the family or researchers.

I’m sad to say I doubt that few outside your family will want them. You might inquire at your church if any one would like to have them free to a good home. You could also inquire at your local library, historical society or genealogy society if they would like to have them. They might be able to provide you with a donation form that you can submit to your tax accountant.

As far as taking care of them, you’re doing all the right things, for what and where they are now. Thanks for a great question and thanks for sharing.

Jacob William Falconbury Sr., a Revolutionary War soldier, is an ancestor of several descendants in the Kings Mountain area in... read more