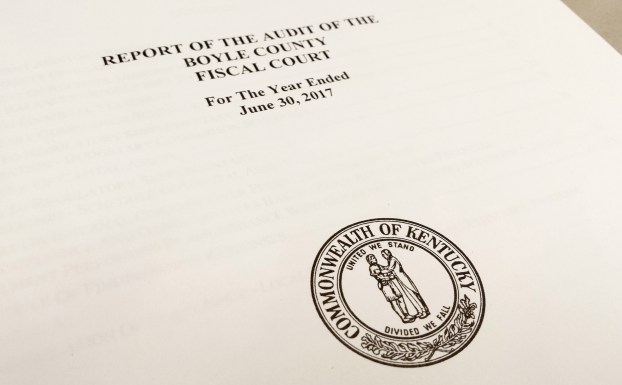 The front cover of an audit of the Boyle County Fiscal Court, released by state Auditor Mike Harmon. (Photo by Ben Kleppinger)

The Boyle County Fiscal Court “did not have adequate controls in place over capital assets” during the 2016-17 fiscal year, according to an audit of the government released by state Auditor Mike Harmon.

Boyle County Treasurer Mary Conley said she discovered the main error identified by the audit before auditors arrived: The county issued bonds to make energy efficiency upgrades in 2015, and the assets purchased for those upgrades should have added to the county’s list of assets. But they weren’t, leading to what auditors determined to be a more than $2.8 million discrepancy between actual assets and the list of assets.

“I’ve been doing this for too long. I know what errors are before them come,” Conley said. “… Whenever the auditors came in, I said, ‘I’ve made a terrible mistake and I need to tell you all about it.'”

Conley said the auditors told her they would have to identify the mistake in the audit; she said that was fine, but to please note she had told them in advance.

“Capital asset purchases totaling $7,223 and asset deletions of $75,600 from fiscal year 2015 were not properly reflected on the county’s capital asset listing. In addition, $2,895,227 of fiscal year 2016 additions were not accounted for on the schedule,” the audit reads. “Also, the 2016 beginning balance was understated by $6,000 and the 2016 additions were overstated by $28,041. This resulted in a total adjustment to the 2017 beginning balance of $2,805,809. Auditors were informed of these misstatements by the county treasurer upon arrival.”

Conley said smaller items noted in the audit were due to several factors. The misstatements of $6,000 and $28,041 were actually errors made in the previous year’s audit by the auditors, Conley said.

There were also some issues created by changing job duties. Conley said maintaining the county’s asset list was shifted to the finance officer during the time period the audit looks at, and some things were overlooked during the transition. “I’m going to take full responsibility — I should have checked over everything that was being added.”

And there was an issue with around $200,000 of the fiscal court’s money not being collateralized for a period of time. Conley said because bank accounts are only federally insured up to $250,000, the county sets up agreements with banks to collateralize the county’s funds above that level, meaning if the bank should fail, the county can cash a security and still have its money.

At the end of the 2016-17 fiscal year, it turned out there was around $202,000 in the county’s accounts that the bank had not collateralized as the agreement states, she said.

“As soon as I saw it, I made the phone call,” though it was too late to correct it for the audit, Conley said. “They said, ‘we saw it Mary and we’ve taken care of it.'”

Finally, the audit also notes that some assets bought by the county were not immediately added to the county’s list for insurance coverage.

The audit summarizes the issues, stating, “the capital assets listing was material misstated, resulting in a material adjustment to the capital asset schedule beginning balance. Furthermore, by not properly including or removing assets on the insurance policy, the risk of loss to the agency increases.”

“Capital asset records are necessary for proper asset valuation, adequate and accurate insurance coverage, internal control and long-range planning for property replacement. Strong controls reduce the risk of asset misappropriation,” the audit reads. “We recommend the fiscal court reconcile all annual inventory reports to the additions, retired assets and surplus list to ensure accurate accounting of capital assets. We also recommend the county review the county’s addition and deletion reports to ensure these assets are properly added to or removed from the county’s insurance policy.”

The audit includes a response from the county, stating, “The county treasurer identified the error, put in place a procedure to safeguard against future errors and then reported it to the auditors upon their arrival to perform the audit of said fiscal year. It was important that the county’s capital assets were stated correctly.”

Leaving the $2.8-million energy efficiency project off the asset list is what Conley said she wishes she could have caught.

“I shouldn’t have missed it,” she said. “It was a really, really big number and I feel really bad.”

Commission grapples with funding for EDP, Heart of Danville