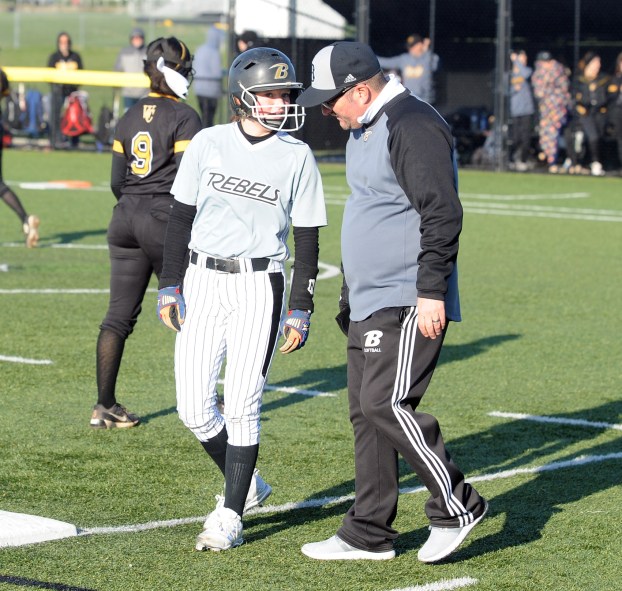 Of the six winningest teams in the region last year, Boyle had the most losses with 15. But that tough schedule paid off, as the Rebels rolled through their district and region tournaments on their way to the state tournament.

“I think right now, we’re trying to get in the groove of everything, just like everybody is,” head coach Brian Deem said. “I think today, coming back off of our last scrimmage against Manual, I thought we didn’t do too bad. (Woodford) nickeled and dimed us a little bit and there’s some plays that we’ve got to make. We’re definitely not where we want to be, it’s going to be a process and it’s going to be tough, it’s going to test our character. But when it gets to late May, I think it’ll pay off.”

Woodford is the first of many high-quality teams that the Rebels will face this year, and for the most part, Boyle held their own in the field — the Rebels trailed 2-0 after four innings and had opportunities to bring in runs.

But the Yellow Jackets made the Rebels pay with three runs late in the game and the Rebels couldn’t string together enough hits to get a run across the plate.

“I thought KG played well tonight. She’s not as sharp as she needs to be, but for the first game coming out, she did well,” Deem said. “I thought we made good defensive plays, there were some bang-bang plays that could’ve gone either way. I also think there were a few routine plays that we just had a lapse of mental focus. When you give teams like Woodford extra outs, they’re going to make you pay for it.”

“They’re doing a really good job right now, my seniors and upperclassmen are doing a good job taking leadership roles and taking responsibility,” he said. “Right now, we’re banged up — we’ve got two or three kids nursing injuries. But that’s part of it, that’s ball. I think one of the most important things for them will be how to mentally prepare day in and day out for top-level competition. That’s going to be the grind on them.

“I think our kids are going to be able to do that, and that’s why I scheduled the way I did. When you have a senior-dominated team, you return most of your starters, you have to face this competition to challenge yourself. This will challenge us as a program, and I told them, I’m worried about the process, not the wins and losses along the way.”

That’s something familiar to the team — just look at last year’s 15 losses. But this year, the Rebels have the “region favorite” tag and a target on their back.

“It’s something new for the kids,” Deem said. “They’ve never been targeted, they’ve always been the hunter. Now they’re the hunted. It is something new, they’re coming off a great year last year. But it’s 2018, no one cares what you did last year. It’s going to be a challenge to them maturity wise, it’s going to challenge their character. But I think I have the right mix of kids to overcome that. It’s just going to take some time.”

The Next One: Rebels excited for 2018 track season

It didn’t take long for Brent Wagner and his coaching staff to prepare for 2018. Wagner, the head track and... read more