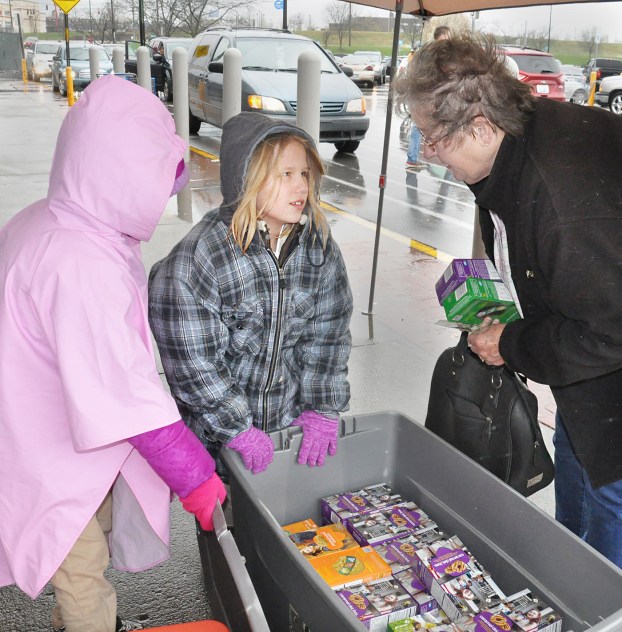 From left, Girl Scouts Petra Hawkins, 8, and Maggie Harris, 9, talk with Myrna Benge who had just quickly pulled over and got out of her car just to buy a few boxes of Girl Scout Cookies.

Local people getting the job done

The sharp, cold rain didn’t stop 9-year-old Maggie Harris from selling Girl Scout cookies in front of a busy store Saturday — it was her last day to sell. Also, she and her troop set some lofty goals for themselves. 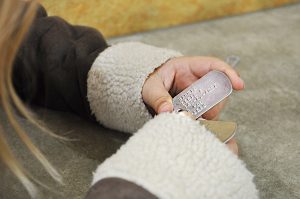 Maggie Harris holds the dog tags belonging to her father, Cecil Harris, who died when she was 10 months old.

While watching it rain, Maggie said the nine girls in Troop 5147 wanted to use donations to purchase 500 boxes of cookies to give to the Lexington VA Medical Center. Troops also collect donations during the annual cookie drive.

“It’s a good idea to (donate). Even if they don’t want to buy the cookies, they can still donate,” Maggie said. The money collected by every troop in the country is designated to support the Girl Scouts Cookie Share Program.

Maggie also wants to surprise her best friend to help her attend their Girl Scout Camp Judy Layne this summer.

But it looks like that goal isn’t going to be reached, even though the Girl Scouts extended the cookie sales season for two more weeks.

On Saturday, Maggie’s mom, Colleene Harris, said to her daughter, “It was a great goal to set. If you hit it or not, you can try again next year.”

Colleene said as of last week, the troop had collected about $300 in cash donations, which comes to about 75 boxes of cookies they can give to the veterans. 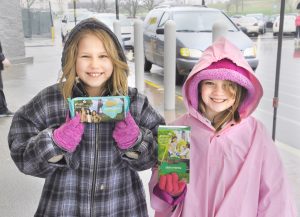 Colleene believes even though the girls didn’t reach their goal, they will still personally go to the veterans hospital and deliver the cookies. She said it’s important for the young girls to see how they are helping people in the community and veterans.

The troop could give the money directly to the Girl Scouts Cookie Share Program, but Maggie suggested the idea of buying the cookies and delivering them to the VA hospital. She said she has lots of family members who have served in nearly every branch of the armed forces — great-grandfathers, grandfathers (one who is currently in a VA facility in Florida), uncles and even her own father, who died when she was 10 months old. Colleene said her husband, Cecil Harris, served in the U.S. Army in Iraq and Afghanistan. 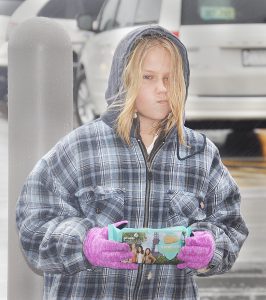 “I don’t remember him,” Maggie said, but she is always reminded of him because she’s allowed to wear his dog tags on special occasions, such as Veterans Day.

Maggie has nearly reached her second goal of selling 900 boxes of cookies,  which would entitle her to a free week at Girl Scout Camp. But she wants to give that honor to her best friend and next door neighbor so they can camp together.

Maggie said her mom agreed to pay for her camp experience so she wants to combine her cookie sale numbers to her friend’s so they will reach the special 900-box goal. 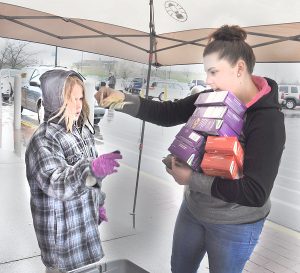 Sommer Newton, of Lebanon, pays Maggie Harris for several boxes of cookies Saturday afternoon. Newton said she wanted to buy Girl Scout cookies, but after checking out the Cookie Locater website, none were being sold in her area. So, she drove to Danville just for cookies. 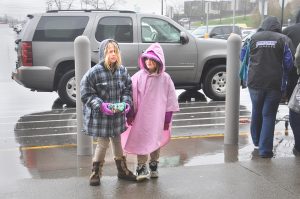 To buy Girl Scout cookies from Maggie, you may email: caharris1750@gmail.com

Volunteers needed to be Circle of Hope mentors Kendra Peek/kendra.peek@amnews.comRichard Guerrant, 91, is one of the mentors in the Circle... read more