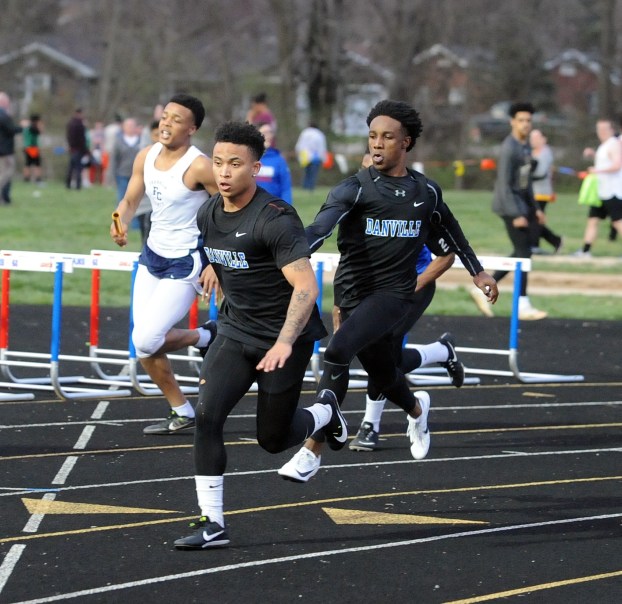 Area track and field teams will excite in 2018

Boyle County, Danville and Mercer County will all be in the mix in May for state track and field championships.

Yes, it’s early. The teams have just one all-comers meet under their belts this season. But it’s already clear that this could be a special season for these area squads.

So where should I begin?

We’ll start with the reigning champs. Boyle County girls and Mercer County boys haven’t had an equal in Class 2A for the past two seasons. But that could change this year, and the two teams won’t have to look far for their toughest opponent.

Boyle County boys will be contending for a title come May, and on Tuesday, they looked like a state contender might look in May.

The Rebels won Tuesday’s meet by scoring points a ll over the place — sprints, relays, distance, throws, jumps and vault.

Ezekiel Harless has added another strong distance runner for the Rebels, and Boyle’s sprinters looked like their usual selves: Landen Bartleson and Chris Duffy each ran an 11.65 in the 100-meter dash for second and third place. Marquise Kinley and Alex Rahbany teamed with those two to win the boys 4×100 meter relay with a 43.69 time — just three-tenths of a second off of their state time last year, where they placed fourth.

The Rebels were also without vaulter Gary Wood and sprinter Reese Smith, both of whom will soon be back from injuries.

Yes, it’s early. Teams are testing who works in what relay or what four events an athlete should compete. But the Rebels are looking dangerous in 2018.

Boyle’s bid for a boys’ state title will go through Mercer County and one of the top track and field athletes in the state, regardless of class: Aaron Johnson.

Johnson put in elite performances during Tuesday’s meet, securing first-place finishes in both hurdles and the high jump. His 110-meter hurdle time from Thursday was faster than anyone at state last year except himself.

Mishi Easterling also showed off his skill during Tuesday’s meet, jumping 21-11.50 in the long jump — another mark that would’ve won state last year.

The Titans graduated a strong class from last year but make no mistake, they’ll be in contention at the state meet.

Danville boys showed up in a big way Tuesday, claiming second place with key members seeing limited action. You can’t talk to Admirals head coach Chris Verhoven without him saying the word ‘potential,’ and for good reason. The Ads are filled with it.

Danville’s time in the 4×100 relay on Tuesday (44.19 seconds) would’ve placed the Admirals third in the state last year.

And, let me remind you: Tuesday was the first time that the Ads’ had ran that relay.

Similar to the Boyle County boys team from Tuesday, Danville scored in plenty of events: Don Harris won both throwing events with Jaleel Warren not far behind and the Ads’ had multiple scorers in each jumping event.

Yes, it’s early. But Danville has the pieces to be a contender in May.

On the girls side, defending state champion Boyle County placed third, with Mercer County winning its own all-comers meet.

The Titans were strong in all areas, but particularly the field events: Zoe Yeast won both throwing events, Jasmine Claunch took first in both jumps and the Titans had two vaulters in the top four.

For Boyle County, the Rebels mixed and matched athletes in different events on Tuesday after a difficult workout the day before. Becca Tarter scored points in each jumping event that she competed in while Chelsea Elmore and Daneezia Patton each placed in the top four in the 100 and 200.

Tuesday’s meet was just the first step on a journey to state for every area team. Yes, it’s early. But three area teams — Boyle, Danville and Mercer — have what it takes to be contending for a state title.

Seygan Robins has earned it all during her career at Mercer County. She’s Miss Basketball. She won two state championships,... read more