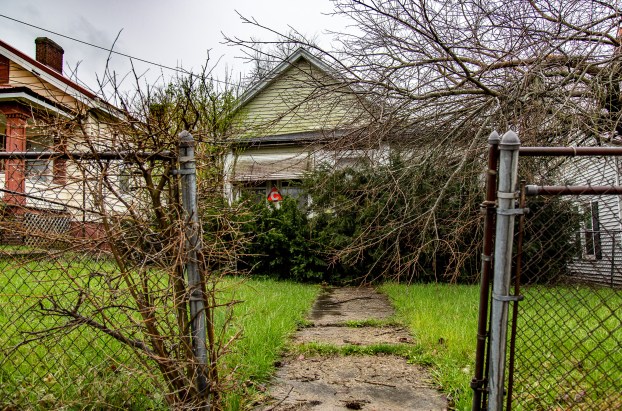 A house at 222 E. Martin Luther King Boulevard is one of seven condemned properties the City of Danville is pondering taking action on. The house was condemned in 2007, but has not been razed. The city has 43 liens on the property totaling about $10,000 and there are 10 years worth of delinquent school taxes, in addition to one other lien-holder. (Photo by Ben Kleppinger)

Danville may take action on condemned property in April

The City of Danville is looking into action it can take concerning seven condemned properties, and the process can’t go fast enough for Mayor Mike Perros.

• 222 E. Martin Luther King Boulevard (PVA value $15,000): This house was condemned in 2007 but has not been razed. The city has 43 liens on the property totaling about $10,000 and there are 10 years worth of delinquent school taxes, in addition to one other lien-holder.

• 134 Wilderness Trail Road (PVA value $15,000): This unique case involves a house that has been condemned since 1989, but was sold through foreclosure in 2012 for $100, causing all liens prior to that date were “extinguished.”

Dexter presented his report to the city commission Monday and began to walk commissioners through it property by property, but after going into detail on the first one, 318 Caldwell St., Perros stopped him.

“If we do nothing, then what happens?” Perros asked.

Dexter said the mortgage-holder on the property “has chosen that very path” because the cost to foreclose and force a sale of the property would be more than it could recoup from whatever the property sells for.

Numerous properties on Dexter’s report are in that situation — if the city chose to foreclose, it would lose money by the time the process was complete, the report warns.

But, Dexter noted, profitability may not be the city’s main concern.

“(If nothing happens), the property would stay abandoned … it would remain a green space,” Dexter said. “If not taken care of by the (owner), the city would probably continue to maintain it once the grass and weeds exceeded a certain level, thus incurring more maintenance liens for generations to come or at least years to come.”

“Probably no one,” Dexter answered.

“In the private sector, you’d be saying, ‘you’re throwing good money after bad.’ But you’re not trying to recoup a dollar here is what I’m hearing you saying,” Dexter said. “If your mission is to simply clean up and you understand that there is an expense — somewhat significant in some situations — if you’re willing to bear it, then so be it. But if you’re not, I don’t want you to have the impression that the city will recoup its liens in these situations because in the vast majority of the ones presented to you tonight, they will not. They will be a net loss, and some of them a somewhat significant (loss).”

Commissioner Denise Terry said a potential benefit to foreclosing is that the property gets out from under its debts with a new owner that can take care of it and even develop or rehabilitate it.

Dexter said it’s also the case that properties are sometimes sold at foreclosure to individuals who still don’t maintain them.

Perros restated his motion to proceed with foreclosure processes on every property on the list.

“What you’re talking about is somewhat of a massive undertaking,” Dexter said. “I’m not saying we can’t do it — I’m happy to do it. But as far as a priority of the properties that are involved — are you leaving that to my discretion? Or the city manager’s? Or who is going to make that determination? Because we probably won’t file seven simultaneous lawsuits.”

“I’ll let you all work that out,” Perros said. “I think this commission made a statement about two years ago … we want some of these vacant, dilapidated properties cleaned up.”

Commissioner J.H. Atkins said before he could vote for or against Perros’ motion, “I’d like to know which ones have already been taken down and I’d also like to know if any of them have current residents residing in them.”

Dexter listed which of the properties have been demolished and noted no one should be living in structures that have been condemned.

Perros said he would like a second to his motion before discussion continued, and Terry seconded the motion.

Terry asked if the properties have to be demolished for the city to move forward on them.

“That’s part of the consideration before you is that there’s two options in some instances,” Dexter said.

For properties that have not already been demolished, the city could either demolish and then foreclose or foreclose while the condemned structure is still standing, he said. In the case of 134 Wilderness Road, where a foreclosure lawsuit has already “wiped away” the previous liens, the city would have to first demolish the building “in order to have a lien to foreclose upon,” he said. “That’s the only one that’s in that unique circumstance.”

Terry said she didn’t see a benefit of demolishing a structure and “incurring more cost” if the city is planning to foreclose on the property and lose money on the transaction anyway.

Dexter suggested commissioners might feel the “blight was so much” on some of the properties that demolition could be viewed as a necessity.

Commissioner Kevin Caudill said he would like a chance to review Dexter’s report and perhaps drive by some of the properties in question before he votes.

Perros soon offered to withdraw his motion, “with the caveat that we do whatever homework we want to do and let’s come back next meeting with some kind of motion.”

“Clearly, doing nothing is not acceptable,” Perros said. “That’s what we’ve been doing.”

“I would agree with that,” Caudill said.