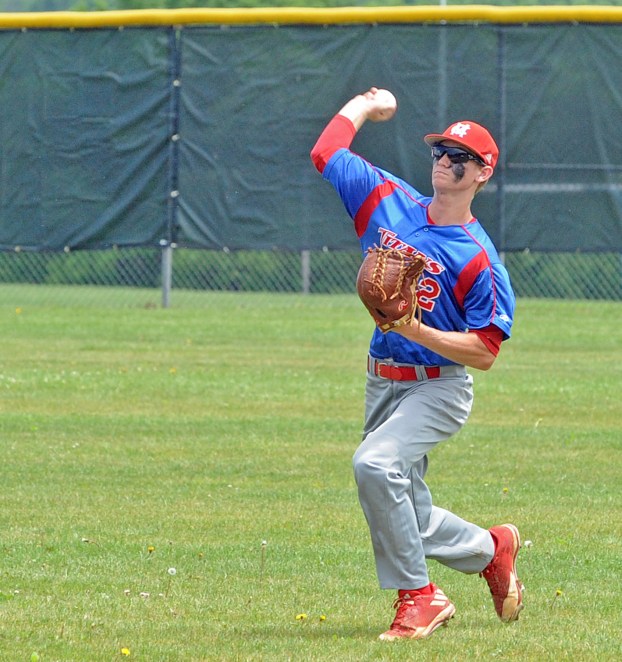 Titans aim for district title in 2018

The Colts have owned the 46th District, even during Mercer County’s region championship season in 2013. The Titans have had quality teams in the past six years but none have been able to break West’s hold on the district.

“That has been in the back of our heads for awhile,” senior Joseph Stoeckinger said. “We definitely want to end that streak this year, win a district championship.”

Stoeckinger is one of six senior leaders for the Titans this year, back from an up-and-down 2017 season.

Mercer flashed potential last year, boasting wins over teams like Boyle County, Southwestern and Somerset. And the Titans lost by just one run to the Rebels in the 12th Region quarterfinals — the closest game region-champion Boyle would play in the region tournament.

This year, the Titans want to bring that potential when it matters most — in district and region play.

“I really like this team,” head coach Adam Shartzer said. “We’ve got a lot of seniors that work hard, they’ll stay after. Our underclassmen are starting to pick up on those work habits. We just want to continue to carry that over: Work hard, play hard. Continue to trust ourselves and our teammates and just do our job.”

Work ethic is something that the seniors agreed has been a difference — both in the offseason and regular season so far.

“Our work ethic is really high this year, this senior class has always been like ‘don’t want to be here, blah blah,’” senior Hunter Kelly said. “This year, the seniors have really been working hard, just trying to improve.”

Kelly added that he sees at least half of the team staying after practice to get extra reps.

“The way everyone is staying after, taking extra cuts off of the tee, coaches stay after to throw extra BP, half the team stays after practice,” he said.

Shartzer credits his seniors for building on that trend this season.

“What those guys have done over the course of their career is something that the program will always be appreciative of,” he said. “They’re the first six here every day, ready to work. They’re stepping up, being leaders vocally and leading by actions. A lot of them have taken on roles where they might’ve felt uncomfortable but they’re helping the team and putting that aside.”

Those six — Stoeckinger, Kelly, Hunter Armstrong, Noah Irvin, Andrew McGinnis and  Zac Robinson — have all provided something different to the team this year.

“Joe Stoeckinger, we’re going to rely on him on the mound and in the outfield. He’s worked on his pitching mechanics in the offseason, he’s going to junior college for that and it’s something he’s taken a lot of pride in,” Shartzer said. “Noah Irvin, he’s getting his bat going and defensively he’s stepped up as a leader for us. Andrew McGinnis, I’m moving over to second base and he’s been on a tear offensively. Hunter Kelly, we’re excited to have him back on the mound. Works quick and with good pace, he’s got three really good pitches and when he’s on he’s nearly unhittable. Hunter Armstrong, three year starter. He’s shown great improvement in his time here, getting stronger and faster, working on defense. Zac Robinson, found out today that he tore his meniscus. He was someone that we could rely on in the outfield and gave us a good left-handed bat in the lineup, power and contact.”

Stoeckinger — he’s going to Frontier Community College to play baseball — said that the chemistry between the seniors and the entire team will be their reason for success this year.

“During a game, we all know what to do, we know to stay focused and we’re always looking to pick each other up,” he said.
Shartzer said a big strength this team will be at the plate. The Titans have played just one game this year — a 10-1 loss at Dunbar — but with some tweaks in practice, Shartzer said he expects the bats to wake up.

“We’ve hit the ball a whole lot better this offseason and through the winter, in our only scrimmage we hit the ball well,” he said. “In our first regular season game this year, we didn’t have the best approach at the plate but that’s something that we’ve worked on. This team wants to take a lot of ground balls, fly balls. They take a lot of pride in their defense. We don’t want to let those routine plays beat us.”

Kelly noted the team’s pitching staff — he and Stoeckinger combine with Josh Barnett for a strong starting trio — as something that could surprise teams in 2018. The Titans graduated Advocate-Messenger Pitcher of the Year, Mason Hazelwood, who’s now pitching at Kentucky.

Hazelwood left a void in the pitching staff and every arm on the Titans’ roster wants to fill those shoes.

“I think we have three top-quality starters, aces on most teams,” Kelly said. “We’ve got three on this team. I think we can make a deep region run on our pitching staff, as long as we swing it.”

The Titans have a balanced set of classes this season — six seniors, six juniors, six sophomores and nine freshmen. Stoeckinger noted two sophomores as standouts to him early in the season: Tyler “Tubby” Stephens and Mason Smith.

Together, the Titans have high hopes for this season and will look to make the region tournament for the second-straight season.

“We want to go out with a bang, for sure,” Stoeckinger said. “We want to win a region championship, have that dogpile. We want it for each other more than ourselves. Every night we’re hanging out together, we’re always staying after. I think we just enjoy playing baseball together, from practice to games.”

Area track and field teams will excite in 2018

Area state championships won’t end for this season. Boyle County, Danville and Mercer County will all be in the mix... read more