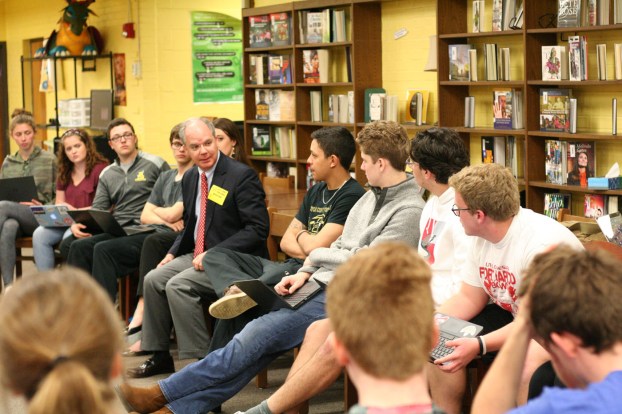 It was a project from that class which prompted Fogle to ask the representative to make the visit.

“I wanted to bring someone into our classroom. In one of our units in AP Gov, we talked a lot about Congress and how it worked, and I thought it would be cool to bring someone from our state,” she said.

Fogle said she thought it would be a good idea for the class to meet Guthrie and learn about his views.

Once Guthrie agreed to the visit, Fogle and classmate Trey Gilliland researched Guthrie, including his stance on issues, his voting history and more. They shared the chart they created with classmates, who then came up with questions to ask, which ran the gamut from Medicare to pension reform.

Guthrie was asked about gun reform, which he said was tricky. He talked about the “gun show loophole,” or person to person sales.

“There’s never been one of these shootings that comes from the gun show loophole,” he said.

Guthrie said he doesn’t believe in confiscating guns, but does support putting more money into school safety. Mental health is another component, but is complicated by problems with Health Insurance Portability and Accountability Act restrictions, he said.

“The line is not clear. The problem in Florida — his problem was clear,” Guthrie said, referring to the Stoneman Douglas High School shooting on Feb. 14, when a former student killed 17 and injured 17 more in Parkland, Florida. Guthrie agreed that the shooter shouldn’t have had a gun.

Guthrie said legislation has been passed regarding mental health, but said it is difficult to know exactly where the line could be drawn on letting family members know about others’ mental health, such as letting a mother know her adult son was violent.

“That isn’t just gun rights people. But we need to figure out that situation, where you can go to a judge and say, ‘This person is violent, they need to be on the no-buy list,’” he said.

Other personal questions included his take on those taking a stand, specifically those protesting gun violence.

Guthrie said, “Anytime someone can participate in democracy, it’s good. I think that’s what we’re all about.”

He cited the First Amendment right to “petition the government for a redress of grievances.”

To a question about medical marijuana, Guthrie said he felt there needed to be more research conducted.

“I just think it needs to go through the proper system,” he said.

Another student asked Guthrie about what changes he would like to see in Kentucky, citing a Forbes list that ranked Kentucky as the 35th best state for business.

After pointing out that it would be something that impacted all 50 states, Guthrie said he felt that fossil fuels were important.

He said the recent tariffs on aluminum proposed by President Donald Trump have him concerned.

“You would think it would help pockets of Kentucky,” Guthrie said, pointing to Hancock County, which he represents. “It has one of the biggest smelters in the country. It uses more energy than the city of Louisville in one factory.”

He said the tariffs sound like they would work, but upon closer examination, they could have a negative impact on other industries that touch the aluminum industry.

Students also asked Guthrie about pension reform for teachers; he said he felt there needed to be changes. Specifically, Guthrie said, he couldn’t understand why educators weren’t allowed to receive the death benefits of their spouses, something he believes should change immediately.

One student asked a more personal question to Guthrie, about how he votes in a way to represent everyone, even those who’s beliefs differ from his own.

Guthrie said he holds town halls to ensure he hears more from everyone.

“In the end, being a representative democracy, if you have 7,000 constituents, not everyone’s going to agree with you,” he said. “I can listen and move forward, but I have to make my own decisions. And every two years, people get to decide, was that the values of the majority of the district or not? You have to listen to everybody.”

Students had also researched his voting history. One asked Guthrie about voting against a bill that enforced anti-gay hate crimes.

Guthrie explained that he didn’t remember that particular bill, but sometimes his votes are based on other aspects of a bill that get added in. He cited the Violence Against Women Act in 2013, which he voted against, and said he voted for an alternative bill that was less popular. Guthrie said he did that because there was a component of the bill that would allow local law enforcement to enter reserves belonging to Native American tribes in instances of domestic violence. That’s a problem because only federal law enforcement agencies are allowed on reserve lands due to long-standing treaties, he said.

Students discussed what they had learned after meeting with Guthrie with their teacher, Ryan New.

One student pointed out how Guthrie explained that he might vote against a bill, citing the discussion about the bill that enforced anti-gay hate crimes, not because he disagrees with every aspect of it, but because there are some components that he disagrees strongly with.

Others said it was interesting to hear his logic on why he voted for or against a bill and how the media plays up certain things. Students said it was also clear to them Guthrie wants to make sure checks and balances remain — that no one branch of government can overpower the others.

New said he is very proud of his students.

“They used their knowledge of the content of the class, investigated voting patterns, what (Guthrie) said, essentially who he was,” New said. That, he said, made for a better, more informed discussion.

Guthrie also carried on conversations with students about their future plans, sticking around afterward to chat before leaving the school. He brought two copies of “Women in Congress,” giving one to Fogle and one to the school.