Easter is a time to celebrate the resurrection of Jesus Christ and is held between March 21 and April 25, and on the first Sunday after the first full moon after the northern spring equinox.

It is the oldest Christian festival and holiday celebrations and the Christian Passover of the resurrection of Christ. 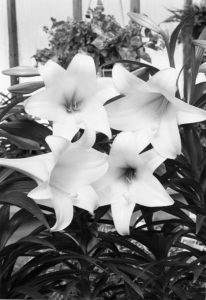 Advocate-Messenger archive photo/Charles A. Thomas
The scientific name for a traditional Easter lily is Lilium longiflorum, which adorn many churches at Easter and symbolize the resurrection of Christ.

The observance occurs between Good Friday and Easter Monday. Many churches celebrate with services each day prior to Easter Sunday including Lent, Palm Sunday, Ash Wednesday, Maundy Thursday and Good Friday with prayers and scripture reading.

Sunrise services begin the Sunday programs, sometimes with breakfast, and continue through the worship services.

Fresh pots of Easter lilies are usually displayed in front of the podium.

A community Easter service was held at 8 a.m. Easter in 1935 and lasted only 30 minutes at the stadium.

Katherine Mathis of the Department of Music in the city schools had charge of the music. Local church choirs also sang.

Ministers from most churches in town participated.

Services throughout Easter week were held at Darnell General Hospital Chapel. The chaplain would speak and cadet nurses made up the choir.

Devotions were held two days for the Catholic and Protestants congregations.

Sunday concluded the services by the chaplain and the choir would follow. Services were open to the public.

The Easter celebrations were usually followed by spring revivals. In 1945, First Church of God on North Fourth Street held a revival during Easter Week.

The last day of the revival, a Mortgage-Burning Service to show the debt for the church building had been paid was held in the afternoon.

Easter also is a time of fun and a time to dress up.

Schools and communities have Easter egg hunts and programs for younger children.

The Advocate-Messenger archives give accounts of activities during the spring celebration.

Advertisements in The Advocate showed the latest clothing since it’s a tradition for new outfits to begin the summer.

In past times, women and their daughters dressed from head to toe. They had new hats, clothing, gloves and shoes and most always a corsage of fresh flowers. The men and young boys wore new suits and shoes.

In April 1898 the local Sunbeam Kindergarten did not celebrate Easter due to the lack of attendance during inclement weather and illness. “As the little ones continue to return to school, they will prepare for an entertainment to be at the end of the school year.”

Children at Trinity Episcopal Church were given an egg hunt at the residence of Capt. A.S. McGroty.

Two hundred eggs, dyed in various colors, were hidden in the yard and the little tots had a delightful time finding them. They did not quit until the last egg was found.

The Advocate also listed numerous visitors arriving in town to see relatives during the week of celebration and others headed for a vacation.

Ryan Commandery No. 17 held annual observances during Easter. The 1928 observance was held at First Presbyterian Church. The knights were dressed in full uniform, less the sword, and marched in the church to music provided by the Masonic Band.

The Gilcher Hotel hosted a special dinner and program of music by an orchestra on Easter for those who did not want to cook or dine at home.

From our files, March 31