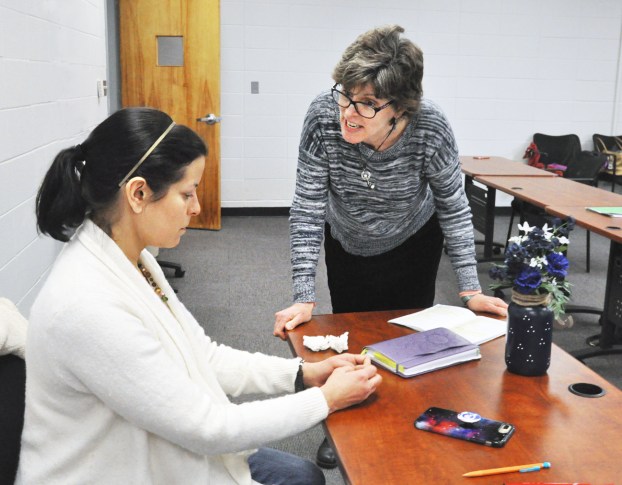 Director, actor say storyline of ‘Gidion’s Knot’ may be painful, but hopefully provokes an understanding

The director of “Gidion’s Knot” says she hopes the audience leaves the production feeling at least two things. Firstly, what incredible acting and story they just saw — as painful as it may be.

“And also a deeper understanding of the trauma that children go through that we, as adults, do not see as important or traumatic,” Liz Orndorff says.

She’s been working with actors Jane Dewey and Stephanie Pistello on just how to convey those thought-provoking sentiments in the next production by Scarlet Cup Theater. 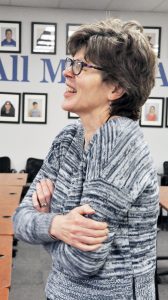 “Gidion’s Knot” hits home on some hard topics dealing with kids today. It brings the audience into an intimate setting, almost giving it a voyeuristic view, where they are able to sit in on the classroom meeting between a teacher and parent. That parent’s son, Gidion, a fifth-grader, was suspended for something he wrote, then later ended his own life over it.

“Jane Dewey is a mother of boys, and brings her experience to the part,” Orndorff says. Most know Dewey as the district director of arts education for Danville Independent Schools. What most may not know about her is her thespian background, or her time working with emotionally disturbed teens.

She has her master’s in liberal studies, a bachelor’s in acting and worked for several production companies before settling down to call Danville her home.

But the last time she acted locally was at least four years ago. So why now?

Because she values a good story, she says.

“A story that explores multiple sides of what’s happening, a story without easy answers,” Dewey says. She says good stories — they guide us to reach inside of ourselves, they make us laugh, cry and scratch our heads in wonder.

“There are no easy answers for these women in ‘Gidion’s Knot.’ I have things in common with the character I play, Corryn, but there are also huge differences.”

However, those differences must be working: Orndorff says the two women are a dream for her to direct.

“They immediately ‘got’ their characters and dug deep into them. Their level of intense acting is incredible, and a joy to watch.” 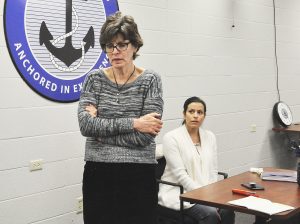 And Pistello, also a classically trained actor, is from Lexington. Orndorff feels that much like Dewey acting for her, she again got lucky being able to cast Pistello.

“I was drawn in by the sheer quality of the script,” Pistello said. “It is suspenseful and unique in the challenges presented to actors and audiences.”

Orndorff says, “Jane had her choice of parts since she was cast first and she selected the mother and is terrific. At the same time, Stephanie is perfect as the teacher, who is caught between a rock and a very hard place.”

The essay that gets Gidion suspected can just be described as graphic and horrendous — in our modern thinking, says Orndorff. “But it resonates with his mother’s love of medieval literature. I have compared (what Gidion wrote) to a sort of ‘Game of Thrones’ story.”

Dewey says finding out who her character Corryn really is, exploring how she reacts in each of the moment of the story is challenging and interesting — it also has worked to stretch Dewey’s own imagination. 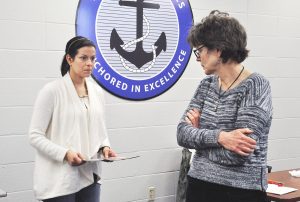 “Can I find her sense of humor through the darkness, can I find her ability to love through her anger and sorrow. Can I play the action of her story? Can I tell her story so it lives?” Dewey says she doesn’t have the time or opportunity to act very often, so she wants the exploration, the process to challenge her to find something new, to open up a new story.

“I think I found that in this play, in this character, and I’m fortunate to have a great acting partner in Stephanie, and in Liz as a director and producer who thinks this is a story that wants to be told.”

Dewey says the fact that Scarlet Cup is a site-specific theater provides yet another interesting exploration — an authenticity of place, which also challenges and inspires her.