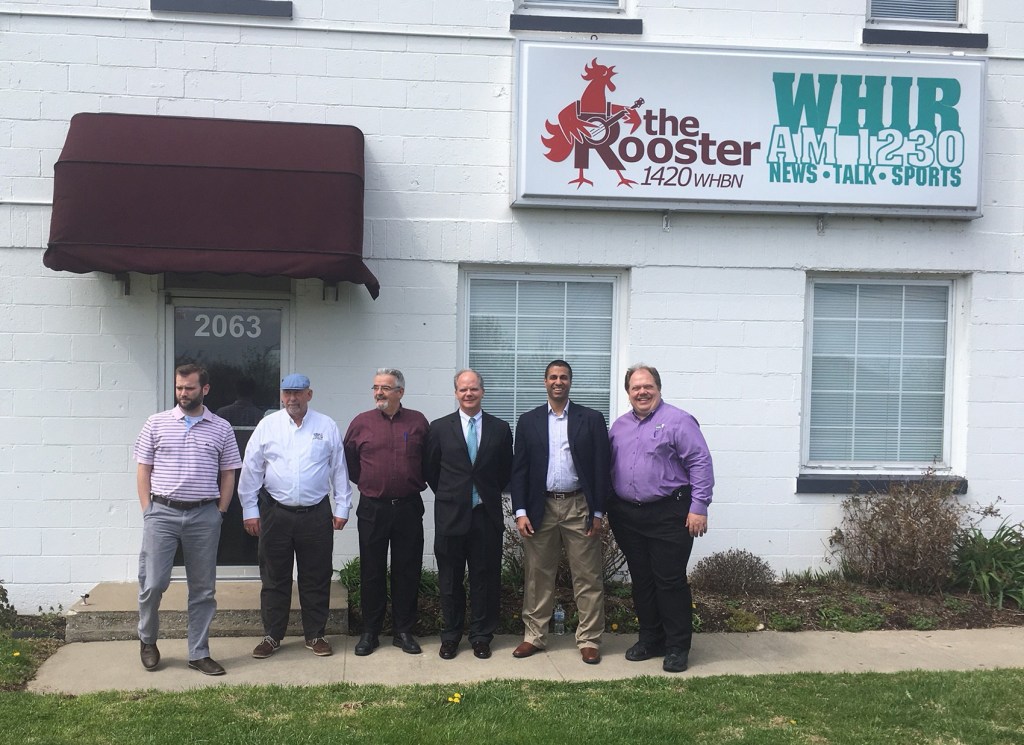 Tuesday was anything but an average day at Hometown Radio in Danville. The station’s small headquarters on Shakertown Road hosted Ajit Pai, chairman of the Federal Communications Commission, for about half an hour around lunchtime.

“He just came by to visit an AM radio station in Danville, Kentucky — who would have ever thought that?” said Robert Wagner, station manager. “I guess he does this — he goes out and visits different areas that the commission regulates and we were on the bullseye for him to visit after he stopped by Corning.” 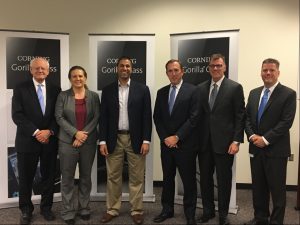 (Photo submitted) FCC Chair Ajit Pai, third from left, poses for a photo with leaders at the Corning facility in Harrodsburg.

Pai stopped at Corning’s manufacturing facility in Harrodsburg before visiting Hometown Radio, according to a news release from the FCC. Pai snuck in a visit to Wilderness Trail Distillery as well, according to his Twitter account.

Pai was also scheduled to visit a school telehealth program in Scottsville later in the day and locations in Tennessee and Arkansas later in the week, according to the release.

Pai’s visits were designed to “highlight how expanding high-speed broadband deployment and closing the digital divide can create jobs and increase digital opportunity.”

Pai “has focused the FCC’s efforts on increasing broadband deployment and extending digital opportunity to all Americans during his first year leading the agency,” according to the release. “Since becoming chairman, he has been traveling across the country to discuss how to accomplish these goals, and thereby promote job creation and economic growth.”

Wagner said Pai came to Hometown Radio with U.S. Rep. Brett Guthrie (R-Kentucky) and he gave them a tour of the radio facilities. Hometown Radio operates 1230 WHIR and 1420 WHBN on the AM band.

“What a nice fellow,” Wagner said of Pai. “Everybody said he was nice, but he was a really, really nice man. And he was really excited to see our technology.” 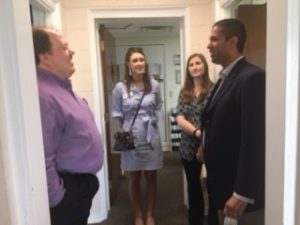 Wagner said one of Pai’s assistants said they like to travel to where the people who are being regulated by the FCC work and see how they operate. He said the assistant told him “it helps us be better regulators.”

“I still can’t believe this ever happened. I never believed I’d meet the FCC (chairman) in the lobby of our building,” he said. “I just never thought that would be possible in my lifetime. I guess I’m still a little star-struck.”

Wagner said he gave Pai a brief history lesson on Hometown Radio — how it’s still based out of the same building it started at in 1947, how kids would dance in the hallways while songs were requested, how live bands used to play in the station’s big room.

“I wish I could tell you there was something earth-shattering that happened — no, he just came by for coffee,” Wagner said.

But Wagner said he did thank Pai for some recent deregulation in the broadcasting industry that he said has been “helpful.” And he mentioned to Pai how many people are struggling in the area with phone calls from scammers who have spoofed legitimate numbers from respected entities such as Ephraim McDowell Health.

“He said, ‘you’re not going to believe this, but I get them, too, on my cell phone,'” Wagner said.

Pai told Wagner the FCC is working on a solution, but hasn’t found one yet.

Wagner said he’s happy to have hosted “the most powerful man, almost, in communications in the world.”

“It was fun; it was interesting to have him. I’m sure there’s a lot of lobbyists that would have paid $1 million a minute to talk with him,” he said. “It’s just one more thing in Danville that makes it special … It’s a small world and it goes through Danville.”

Pai tweeted about his trip through the Bluegrass later in the afternoon.

“Great visit to @Corning in @HarrodsburgKY this morning! Saw how/where @corninggorilla is made — the glass that covers billions of smartphones (including #iPhone since 2007). Also an informative discussion about optical fiber, crucial to both wired internet access and 5G wireless,” Pai tweeted Tuesday afternoon.

Great visit to @Corning in @HarrodsburgKY this morning! Saw how/where @corninggorilla is made—the glass that covers billions of smartphones (including #iPhone since 2007). Also an informative discussion about optical fiber, crucial to both wired internet access and 5G wireless. pic.twitter.com/kEkyr5S0Pt

Pai has complimented Corning before for its production of optical fiber. In April 2017, he celebrated a deal between Corning and Verizon Communications — his former employer — for Corning to sell Verizon more than $1 billion in optical fiber.

“I’m pleased to see that Verizon and Corning have reached a $1.05 billion agreement under which Corning will manufacture and Verizon will buy up to 12.4 million miles of optical fiber each year,” Pai said at the time. “This agreement heralds the construction of ‘densified’ 5G networks that will benefit American consumers. It will create thousands of high-quality jobs building and laying fiber. And it will go a long way toward closing the digital divide.”

Of his visit to Hometown Radio, Pai tweeted: “Terrific visiting @hometownlive, WHIR 1230 AM, in @DanvilleKY with @RepGuthrie! Enjoyed hearing how the station has kept Kentuckians informed and entertained since 1947 — all from this location and soon using an FM translator.”

Terrific visiting @hometownlive, WHIR 1230 AM, in @DanvilleKY with @RepGuthrie! Enjoyed hearing how the station has kept Kentuckians informed and entertained since 1947—all from this location and soon using an FM translator. pic.twitter.com/VIiWxlAsQ0

Pai also tweeted about his visit to Wilderness Trail Distillery: “Thanks to @WTDistillery for the inside look at how science, technology and the spirit of innovation help make innovative spirits. Strong proof that entrepreneurship is alive and well in central #Kentucky!”

Thanks to @WTDistillery for the inside look at how science, technology, and the spirit of innovation help make innovative spirits. Strong proof that entrepreneurship is alive and well in central #Kentucky! pic.twitter.com/YWgShPjg8g

FCC Chair Ajit Pai is perhaps best known for his opposition to “net neutrality,” the concept that internet service providers should be legally required to give equal access to all websites and online services and not block or slow down particular ones. Pai voted with the majority on the FCC in December to repeal net neutrality rules. The repeal is currently being challenged in the courts.