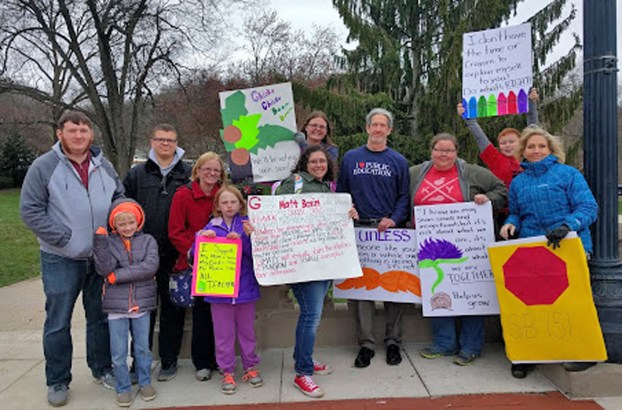 Teachers and others take to Frankfort

‘Let’s hope it made a difference’

A sea of red flooded the Capitol on Monday as teachers and their supporters protested the Kentucky General Assembly after the Senate Bill 151 was passed last Thursday night — a wastewater services bill unexpectedly turned into a bill about teacher pensions.

Caught up in the wave were educators from Boyle and Danville school districts who said it was encouraging to have the crowd gathered in support.

For Boyle County students Ben Hatfield and Clay Karsner, it was a good experience. Karsner’s dad, Steve Karsner, is the principal at Boyle County Middle School, and his mom, Ramona Karsner, is an educator in Pulaski County.

Hatfield said, “If it affects teachers, it affects their students. Public education is important.”

He and Clay had decided they were going to the Capitol on Monday, Steve Karsner said.

“They were going on their own if I didn’t go,” he said. “I think it’s great they are interested in the law-making process and that he wants to support teachers. It definitely makes me proud as a dad.”

The two teens, juniors at Boyle County High School, got to sit in the gallery while the Senate voted on a few of the bills, which they said was pretty interesting. 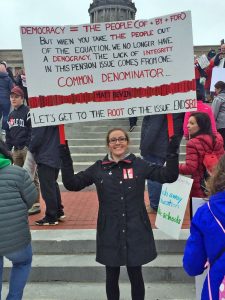 House Bill 366 was passed in the Senate while teachers and other rallied outside the chamber door, chanting things like “We will sue you,” “Kentucky, united, we can’t be divided,” and singing “We’re not gonna take it.” The bill pertains to cutting corporate taxes while raising retirees taxes, said Eli Edwards, a Boyle County teacher who sat in the gallery to watch the vote.

Edwards said the day had been filled with determination and hope.

“After the votes were cast, though, it changed to disbelief and anger,” Edwards said.

Other bills educators were concerned about included House Bill 200, a budget-related bill.

Danville Independent Schools Superintendent Keith Look, who was there with about 15 others from Danville district, said it was a truly moving experience.

“The crowd’s size, respectful manner and unwavering intent assures us that our children’s education is in the hands of true professionals,” Look said.

Danville High School teacher Pat Calvert said it was encouraging to know teachers had made the journey from around the state to be in Frankfort Monday to show their support together.

“It was pretty impressive,” she said. 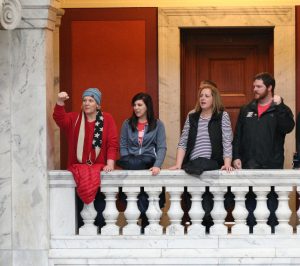 Kendra Peek/kendra.peek@amnews.com
Boyle County educators Jamie Hester, Cassidy Cornett, Karen Edwards and Eli Edwards joined others from around the state on Monday to protest cuts to education in Kentucky.

Calvert said she was surprised by the large crowd, which started when they arrived at about 8 a.m. in time for a rally, hosted by the Kentucky Education Association.

Attorney General Andy Beshear came out to meet the teachers who were there that morning, too, said Calvert, and shared his plans to sue the state legislature regarding the passage of Senate Bill 151.

But the day was about more than pensions, Calvert said.

“We are worried about the cuts to public education. It’s not just about teacher pensions. We can’t keep cutting (education) and expect it to be something to be proud of,” she said.

Calvert said she thought education in Kentucky has been something to be proud of in recent years, but cuts to the Family Resource and Youth Services Centers and the other supplemental programs concern her and other educators.

As many left around lunch via school buses acting as shuttles taking them to locations around the city, a smaller wave arrived. Calvert said she thought it was pretty nice that so many districts had organized to let their buses be used.

“It was really good. We’re all in this together,” she said.

Calvert was also impressed by the number of children there.

“It was a neat thing to have kids out, learning about activism and learning to let their voices be heard,” she said. “It was a pretty cool experience. Let’s hope it made a difference.”

She’s not alone in that hope. Before leaving the Capitol, Look tweeted, “May wisdom prevail today in prioritizing high-quality public ed for Ky’s children facilitated by valued educators.”

Calvert said, “Only time will tell.” 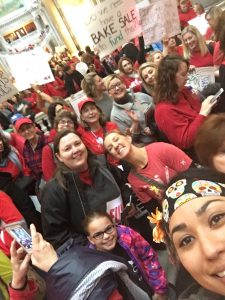 March Madness made things a little crazy at Little Caesars on Monday, as the national pizza chain delivered on a... read more