The rest of the story

CENTRE COLLEGE
Press release
“War is Only Half the Story” is the 10th-anniversary exhibition of The Aftermath Project, a non-profit, grant-making and educational organization that supports photographers documenting the aftermath of conflict.
The exhibition highlights The Aftermath Project’s commitment to educating the public about the true cost of war and the real price of peace through visual storytelling that explores what it means for individuals to learn to live again, to cope with the lingering wounds of war, to rebuild lives and homes destroyed by conflict, to restore broken relationships and recreate civil societies.
Founder and director Sara Terry is a documentary photographer and filmmaker whose own 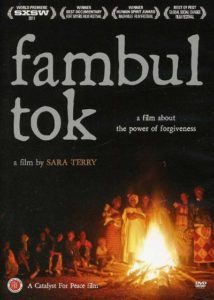 Photo contributed
“Fambul Tok” will be screened during an event tonight in Newlin Hall on Centre College’s Campus. The documentary is by The Aftermath Project’s founder Sara Terry, who will be onhand to discuss the movie after its showing.

practice has focused on post-conflict societies. Her documentary, “Fambul Tok,” which grew out of her long-term still photography project about forgiveness traditions in post-conflict African countries, is about an unprecedented grassroots reconciliation program started by Sierra Leoneans to confront the atrocities of their 1991-2002 civil war, and to reintegrate perpetrators back into their communities.

This exhibit is free and open to the public 9 a.m.-4 p.m. Monday through Friday, as well as by appointment and when the Norton Center is open for concerts and related activities.
Several community engagement opportunities focused on this exhibit are offered, also, including “From War to Healing to Forgiveness: How We Move On,” 7-9 p.m. tonight (Thursday, April 5) in Newlin Hall. Join artist and filmmaker Sara Terry for this poignant evening about conflict and how to move on. As much timely as it is relevant, Terry will introduce her award-winning film, “Fambol Tok.” Immediately following will be a panel discussion with Terry and members of the community.
About the film
Victims and perpetrators of Sierra Leone’s brutal civil war come together for the first time in an unprecedented program of tradition-based truth-telling and forgiveness ceremonies. Through reviving their ancient practice of fambul tok (family talk), Sierra Leoneans are building sustainable peace at the grass-roots level – succeeding where the international community’s post-conflict efforts failed.
‘Post-Conflict, Healing and Forgiveness’
This panel discussion will focus on how people grieve, heal and forgive following the traumas of conflict.  Panelists will include Terry; Dr. Isabella La Rocca, Docu-photographer, activist, artist and Centre College Assistant Professor of Art; Dr. Jan Wertz,  Professor of Psychology and Chair of the Psychology Program; and Dr. Kaelyn Wiles, Centre College Assistant Professor of Sociology. This event is presented with support from The Kentucky Humanities Council.
Events will be held in Newlin Hall, are free and open to the public.
For more information, visit  nortoncenter.com/events/war-is-only-half-the-story-the-aftermath-project-at-10-years.
You Might Like