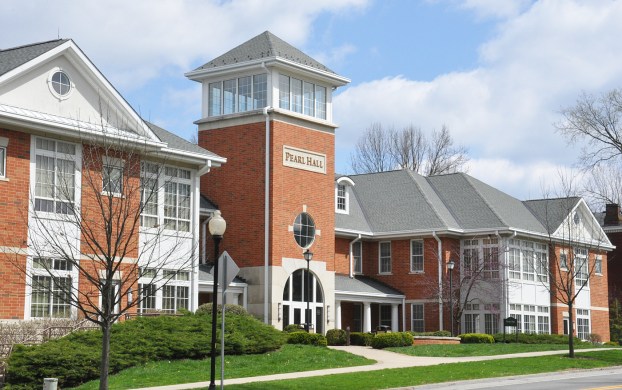 (Photo by Robin Hart/rhart@amnews.com) Centre College’s new dorm is planned to have the same architectural style as Pearl Hall, seen above.

Centre College gained approval from the local Planning and Zoning Commission Wednesday to proceed with plans to build a new dorm on the north side of campus.

The 184-bed dormitory would be located on current green space that used to be a soccer field, north of Main Street and west of Fifth Street. The area is bordered on the west, north and east sides by Louise Street, McMillian Street and Rowe Street, respectively.

The P&Z Commission held a lengthy public hearing for Centre’s site plan, during which numerous residents of the neighboring streets and other interested members of the public commented. 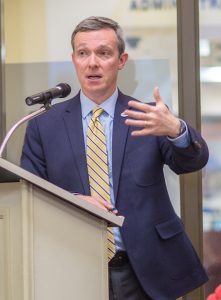 (Photo by Ben Kleppinger/bkleppinger@amnews.com)
Centre Vice President for Legal Affairs James Leahey explains the plan for a new dormitory on the college’s campus during a public hearing before the Danville-Boyle County Planning and Zoning Commission Wednesday morning.

James Leahey, vice president for legal affairs at Centre College, told those gathered Centre wants to grow within its existing footprint, rather than purchase additional land; and the college wants to grow in a way that its neighbors are OK with.

Centre College has been around a long time — 200 years next year — and was initially thought of as outside of town, Leahey said; but that’s clearly not been the case for a long time, as Centre is now considered a central piece of the city.

“I think it’s evident that we’re a campus that has grown up in the town, in the neighborhoods,” he said. “… What we’re trying to do with this particular development, since it does come right up to a neighborhood that has been there for a long time as well, is try to design the layout, and the functionality, and the parking lot, and the buffer zones, so as to minimize the impacts of this development on the neighbors.”

In order to accomplish that, Leahey said Centre plans to construct an earthen berm — essentially a “small hill” — that will block headlights from parking cars from illuminating homes and yards. Centre will also be adding “heavy landscaping” on the berm, as well as a fence, Leahey said.

Construction on the dorm is expected to begin later this year, according to Wayne King, director of Facilities Management for Centre. Leahey said the goal is to open the dorm by the fall of 2019.

King said test drilling has already begun at the site to determine what is below the surface of the land and whether geo-thermal heating and cooling could be used in the dorm.

A drawing from architectural firm Hastings+Chivetta shows a plan for two long parking lots — one with 67 spaces on the north side of the dorm and one with 85 parking spaces on the east side.

Many of the public comments focused on the northern parking lot, which would be separated from McMillian Street by a 25-foot buffer, including the berm, landscaping and fence.

Public concerns varied, but generally focused on the following:

• Could the dormitory structure, as well as plans for a second dorm in a future phase, be moved so they are further from the neighborhood?

• Could the parking lot be moved so it’s not directly adjacent to the neighborhood?

• Will vehicles be allowed to exit the parking lot through an entrance off of Rowe Street depicted on drawings of the plan?

Several commenters also noted they like being able to see green space on Centre’s campus from their homes now, and didn’t like the idea of being blocked off by the berm, fence, landscaping, parking lot and three-story dorm.

Leahey said there wasn’t a good way to arrange the dorm footprints differently and maintain the goals of the project. The first-phase dorm and possible second-phase dorm — which was not part of Wednesday’s approval — are arranged to the outside of the approximately 6.6-acre tract of land intentionally, he said. 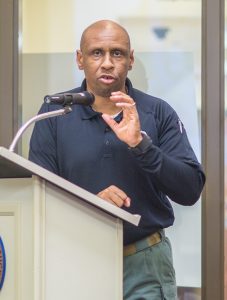 Danville Police Chief Tony Gray said he wants to ensure the flow of construction traffic while a new dorm is constructed on Centre College’s campus is controlled well because many children play in the adjacent neighborhood. (Photo by Ben Kleppinger)

“What we’re trying to do with our development over there is maximize the interior space and the interior activity in that development, so that as the students are frolicking and throwing Frisbees and doing whatever they’re going to do, they’ll do that on the interior, not on the exterior of these buildings, which would be more disturbing — we think — to the neighbors,” Leahey said. “… So part of that is developmental for them, part of that is to try to develop more of a residential feel than a chopped-up feel, and part of it frankly, is trying to minimize the impact on the neighbors.”

Leahey said hilly terrain in the southern and western portions of the land also make it more difficult and costly to relocate planned buildings. The entrance off of Rowe Street to the dorm’s parking lots will be gated and locked; it will only be used for emergency access.

Danville City Commissioner Denise Terry attended Wednesday’s public hearing and said she thinks the large number of comments from residents boil down to one big question:

“The real question that I am hearing here today is, ‘What’s that going to look like from the other side?’ When these residents look out their back doors, what are they going to see? And is there a way for you guys to make some sort of conceptual drawing of that?” Terry said.

Leahey said Centre could attempt to do just that, and can share conceptual drawings with neighbors. He offered that the dorm is planned to have a similar architectural style to Pearl Hall, something that seemed to satisfy several members of the audience.

Leahey said Centre will also continue to have conversations with neighbors about the berm and fencing, in order to find a solution that satisfies both concerns about traffic noise and keeping a friendly, visible connection between the neighborhood and the campus.

Along with the site plan approval, the P&Z Commission also approved recommending a rezoning of the entire Centre College campus to “institutional campus development” (ICD). 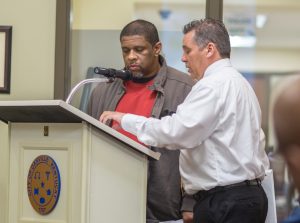 (Photo by Ben Kleppinger/bkleppinger@amnews.com)
Planning and Zoning Director Steve Hunter, right, explains the layout of a proposed dorm and parking lot using an architectural drawing to Kevin Gray, whose grandmother lives in the neighborhood around where the Centre College dorm is planned.

P&Z Director Steve Hunter said the rezoning is largely housekeeping because, for some reason, Centre’s campus has existed in many different zones, despite the fact the ICD zone was basically created for “campus” environments just like Centre. The rezoning nonetheless got the community’s attention because it required yellow re-zoning notification signs to be put up all around Centre’s campus, prompting numerous phone calls.

“It is ironic that the sign police went out and littered up the campus with signs,” Hunter said, chuckling. “But that’s what we have to do with a zone change, unfortunately.”

The P&Z Commission actually filed the application for the zone change jointly with Centre College. Hunter said changing the college’s zoning is in compliance with P&Z’s future land use map (FLUM) for the area. It will also result in fewer visits to the P&Z Commission by Centre College when it has projects in the future: Currently, Centre has to pursue zone changes and site plan approvals for construction projects, since the land isn’t properly zoned, Hunter explained. If the zone change is approved by Danville City Commission, Centre will only have to seek site plan approvals for future projects.

The P&Z Commission voted unanimously to recommend the zone change to the Danville City Commission.

Dee Craig can see solutions to world problems in a mural. Chosen as the artist to participate in this year’s... read more