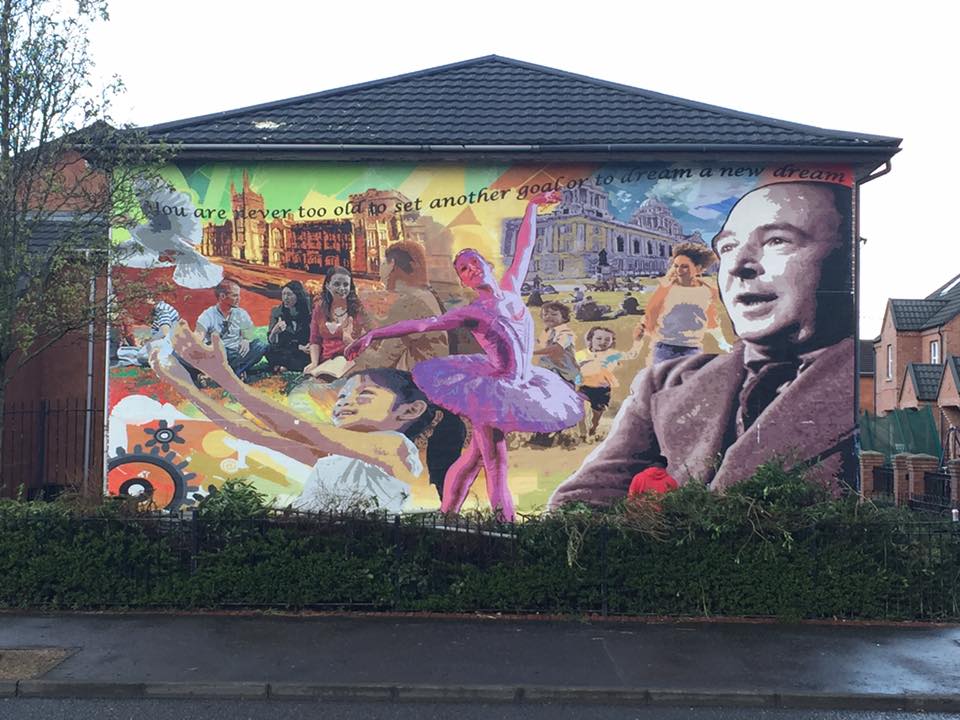 (Photos courtesy of Dee Craig) A mural by artist Dee Craig is seen in Belfast. Youth from a local center helped design it, depicting diversity and educational themes. The mural also contains the image of C.S. Lewis, famous poet and novelist who was born in Belfast. Craig was chosen by the Sister Cities Commission in Danville to be this year’s artist in its exchange program with Carrickfergus, Danville’s sister city.

Dee Craig can see solutions to world problems in a mural. Chosen as the artist to participate in this year’s Sister Cities Artist Exchange program with Carrickfergus, Craig will soon have his chance to put his creative stamp on a different part of the world when he comes to Danville later this year. 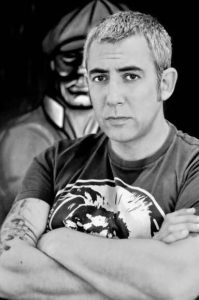 Craig was born in Belfast —”In a typical working-class upbringing, during very difficult circumstances here. I guess that gave me the exposure as an artist, all very community-driven. And, to this day, I give thanks to the community for making me the artist that I am today.”

He painted his first public mural due solely to word of mouth. “Whilst I was still at school, I started by painting family and friends’ bedrooms, and Northern Ireland being a small country, word travels fast.” He says the bedroom painting work grew.

When he first started, murals were driven by the violent times he lived in — known as the Northern Ireland conflict, a deadly struggle between the nationalists and unionists that lasted until the late ‘90s. 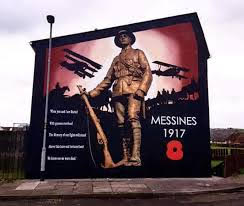 A mural by artist Dee Craig in Larne, Northern Ireland. Craig is well known for being an integral part of projects to color over paramilitary murals that had existed during the 30 years of conflict there, a period referred to as “The Troubles.”

Some folks in the community asked Craig to use his creative skills to produce his first mural in the mid ‘80s. Now his intricately painted walls of creative symbolism — many award-winning — can be found all over the world.

Many of his murals at home, in Northern Ireland, were part of projects to color over the paramilitary murals, which were created during the 30 years of conflict there, a period also referred to as “The Troubles.”

Craig said communities around the world are facing critical challenges and a lack of expression on issues such as income equality, unemployment, poverty, education and health care.

“Any of these challenges could use an artist’s mind, a creative question or a critical thinker to help us find our way to a more healthy and just future with a visual insight into a community,” Craig said.

This is the second artist exchange, and the committee changed up the procedure a bit. For the selection process this time, the Danville and Carrickfergus communities selected up to three candidates each. The receiving communities made the final selection using brief bios and the artists’ mediums.

Danville Sister Cities had the choice of a visual artist (panting, printmaking and collage), a photographer/storyteller and a muralist. Committee member Mary Beth Touchstone said all of the artists were outstanding.

“I would have been happy for any of the three to come to Danville,” Touchstone said, but she favored Craig — for a variety of reasons.

“First, Craig has experience creating murals in Belfast, a city with rich history of public art, specifically murals — so he had the experience,” Touchstone said. Second, she said he was hopeful he’d be able to educate local organizations and artists on a variety of aspects related to public art.

“How might we introduce the concept of large-scale murals? How might we engage members of the community to create a vision or to engage the community as the artist creates their vision? What process does he use? What questions does he ask?” 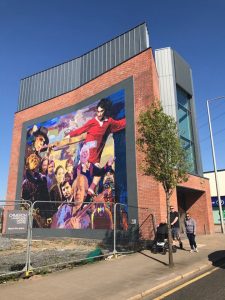 A mural by artist Dee Craig painted on the side of the Eastside Visitor Centre in Belfast, Northern Ireland, represents what community members there felt was important to showcase.

Touchstone said given that Craig has created a number of murals, her hopes are he will teach the area new techniques and instruct on which paints work best, how to preserve the murals once created, and so on.

“It wasn’t until we started exploring his objectives that we discovered that Dee wanted to create a mural while in Danville — wow. We’ll be able to work with Dee and learn as he creates his mural — learning by doing.”

Craig seems up for the challenge.

“Through murals, I feel we can illuminate truth, offer transcendent experience in a far too literal world. They can challenge us to feel and connect us to our common humanity,” he said.

Craig gives an example of a project he worked on in 2016, in the East Belfast neighborhood of Northern Ireland. Craig said he asked youth of the area what they wanted to improve about their surroundings. They told him they wanted to change most people’s perceptions of the Polish community — an area, he said, that was in the news mostly for the wrong reasons.

“For Your Freedom and Ours,” a community project, was then born, producing what Craig said is a visual narrative of shared history between the two cultures. He said through workshops and discussions, both communities broke down barriers that had been built with stereotypes and myths each were ignorant of.

“The mural arts project was a platform used to create a relationship that has now turned into a bond with both these communities,” Craig said. He said further projects have developed, with others in the pipeline, such as an exchange mural arts project with Warsaw at the request of the Polish government.

“It’s events like this that I believe demonstrate the immense power of mural arts projects in the community.”