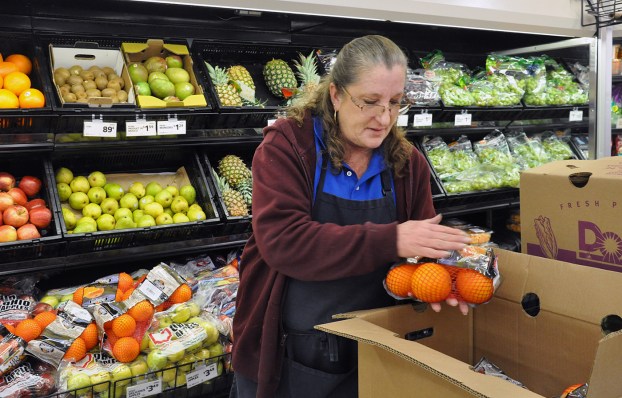 Nancy Brown jiggles a sack of oranges "flat" it so she can stack more in the refrigerated case.

One Day: Nancy Brown, Produce manager at Save a Lot 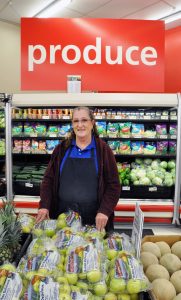 Brown is the produce manager at Danville’s Save a Lot and is planning on retiring in May. “I’m going to sit on the dock,” where she lives on Herrington Lake with her husband and daughter, she said, while quickly placing packages of celery in nice, neat rows.

She won’t totally retire though. She’s going to continue working a couple of days a week there while her replacement learns how to run the department.

Brown said several women have asked her if they could get a job in the produce section, too. Brown told them, “Yes. Can you lift 50 pounds?”

People don’t realize how physically hard her job can be, she said: It’s not just arranging bright red apples in display bins; or pulling brown bananas off the shelf; or telling a customer which is a head of cabbage and which one is a head of lettuce.

Potatoes arrive at the store in 50-pound bags — each holding 10 5-pound bags of spuds. Bananas are delivered in 40-pound boxes. Brown said it’s her job to unload delivery trucks, three times a week; and pull carts loaded with boxes of fresh veggies and fruits into the storage cooler. 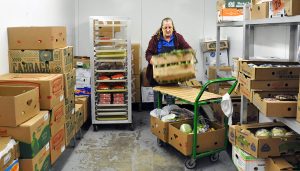 Nancy Brown makes several trips everyday to the walk-in cooler at Save a Lot and loads up cart after cart of all kinds of fresh produce in order to keep the shelves full.

Every morning, she determines what displays need to be restocked and tidied up. She walks back and forth to the cooler all day, getting whatever is needed, like boxes of Romain lettuce, cartons of berries, heads of lettuce, bags of carrots and bunches of bananas.

“It’s hard work. I’ve spent 44 years of doing this heavy lifting. Someone else can come and do this,” she said, chuckling while reaching down into a deep display box of Idaho potatoes and pulling out a bag of red new potatoes someone had decided against.

Physically working hard “is what kept me going, but it’s breaking me down,” she said smiling.

Brown started working as a fresh meat wrapper at Jordan’s Super Value store in 1974, just a year after graduating from Boyle County High School. There were a lot more bones to deal with then than meat workers do now. 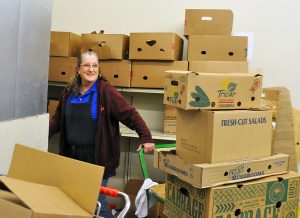 Nancy Brown hauls a load of empty boxes out of the storage area to the box crusher.

Then she went to Foodtown, which became Big Value, where she was named produce manager, and then it became Slone’s. She said the owner thought the produce section, “needed a woman’s touch.”

When Slone’s closed, Brown worked at Piggly Wiggly and when it closed she kept on working for Save a Lot, which took over the space.

Over the years, Brown said the way fruits and vegetables are packaged have changed a lot. “Back in the day,” Brown said, display bins were filled with ice; now they’re refrigerated. Strawberries and blueberries came in larges boxes and employees had to put them into smaller containers for the shoppers. Celery came in unwrapped so workers put rubber bands around each stalk. They also had to cut the ends off of heads of lettuce, pull off wilted leaves, toss the heads in a bag and twirl it to tie it closed, Brown said. And they wrapped red tape around each bunch of bananas so people wouldn’t break off one or two of the fruit to buy. But that didn’t last long, Brown said. 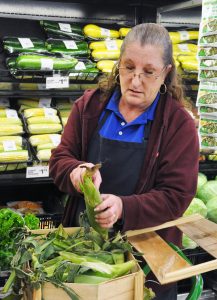 Nancy Brown takes of the outer leaves of fresh corn before putting them out for sale.

Today, some processing still takes place back in the working and storage area. Brown said usually, someone is at the sink shucking corn, cutting melons and packaging squash. To help shoppers and cashiers tell the difference between zucchini and cucumbers, Brown said she likes to have the squash in packages and the cucumbers loose.

Brown said shoppers have definite preferences when buying fresh produce. A few like to have their corn clean and packaged instead of having the mess of shucking it themselves. Some folks like purchasing a few slices of melon in a package instead of buying the whole thing.

And for some reason, other shoppers would rather buy three tomatoes wrapped in a tray, than to pick up three loose tomatoes in the display.

“I don’t know why,” she said laughing.

One of the two Democratic candidates for Boyle County judge-executive has withdrawn from the race. David Alan Reeves filed his... read more