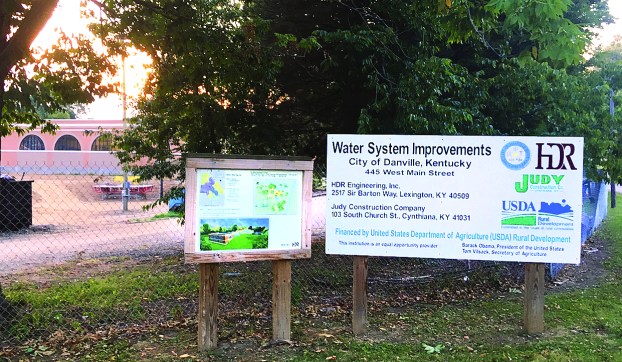 File Photo Photo by Robin Hart Signs are posted as construction begins at the water treatment plant on Lexington Avenue.

Danville city engineer Earl Coffey said the award is “exciting,” because this is one more award the project has earned. “We’re on a streak.”

The award is another example the city picked a good engineering company to work with, Coffey said. Danville had worked with Quest Engineering on other projects before it was acquired by HDR, therefore he and other city officials were already familiar with most of the engineers for the project.

He said they took the master plan that had been developed over the past 10 years, researched, tested and verified the data, and implemented the plan. “They carried that ball forward,” Coffey said.

According to a news release, Danville’s leadership has “continued its foundation of innovation and forward thinking that had been part of their water utility.”

The water plant was designed to “be a fusion of modern treatment technologies, constructed in an urban environment and in harmony with its surroundings,” according to the release.

All of the updates and expansion also had to be confined within the footprint of the existing plant, without any interruption in water delivery to its customers.

The release stated, “HDR embraced the challenges set forth to successfully design and oversee construction of this generational project which would turn out to be the largest single investment the city had ever made.”

While designing the water treatment expansion project, engineers met with Danville residents during 22 public meetings to hear their ideas and input of what they thought was important elements for the project, according to the release. The project eventually included demolition of nearly all existing water treatment elements, repurposing all of remaining historical buildings, and construction of five new buildings or treatment basins.

According to the release, construction took place over 36 months and never resulted in any water service interruption. The project was constructed under-budget with change orders totaling less than 1 percent of the total project cost.

HDR helped the city secure federal funding for the project that usually isn’t offered to smaller communities, according to the release.

Historically, “Danville’s leadership has made decisions regarding water infrastructure that has influenced the opportunities that future generations would have in economic, social, and environmental progress. An example was their foresight to partner in the construction of Herrington Lake, in 1923, which has served as the most stable water supply source in the region,” the release reads.

Kentucky firms representing 12 projects throughout the state were recognized with awards.

According to the release, the Engineering Excellence Awards program recognizes outstanding achievement and innovation and is open to any firm engaged in the private practice of consulting, engineering or surveying.

Passport lets participants in multiple events earn potted native plant The earth is too important for just one day, so... read more