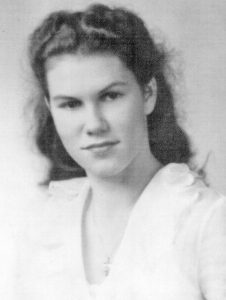 Constance was a quiet woman whose life mostly revolved around her family. As a child she was a “Navy brat” hauled from coast to coast as her Dad boarded ship at one port or another. Later, after growing up, she was a Marine Corps wife and spent her young adult years traveling around the world to various military posts. From Camp Lejeune to Quantico to Camp Pendleton to the Tawain Defense Command in Taiwan, she took her family and skillfully cared for them along the way. Her kids were “military brats” carried around the world, but all we knew were loving parents who always took care of us. At mid-life her husband retired, they moved to Kentucky (his home) and she transformed herself once again and became a farmer’s wife. She adapted well to the change, learned to love Kentucky and spent the balance of her life in the Blue Grass state.

In her younger years she was a bowler and there are still trophies sitting on the mantelpiece attesting to her skill. Also in her younger years, she loved to sew and she was great at it. She sewed for her children and once, as the great seamstress she was, she won first place against the entire state of New Jersey in a contest. But for her “off” hours, when she wasn’t cooking or cleaning or packing or traveling or dealing with babies who needed their diapers changed or teenagers who needed discipline, she read. She read anything and everything she could lay her hands on. She read fiction, nonfiction, biographies, and a minimum of two newspapers every day. She was truly a voracious reader and really loved her books as her fifth child. They made her happy, they gave her satisfaction, they fulfilled her. She could travel anywhere, have any adventure, meet anyone, do anything and she had only to open the cover of a book. Her love of books, and her reading to us, from almost infancy, have made all of her children readers as well. Of the many things she gave us, the love of reading was one of her greatest gifts to us.

She was a hard working woman in many ways doing one of many possible things that needed doing in a given day. But she was also a woman who could step up and work as a true helpmate when needed in the financial department. As a result, she held many jobs over the years, a sales clerk, a receptionist, a secretary and her most favorite, as a proof reader for nine years for the Danville Advocate Messenger. Because of her love of reading she thought being part of a newspaper was the ultimately perfect job and she gave it her heart and soul. She used to joke that she couldn’t believe she was a good proof reader because she was a bad speller. But as she said, “I may not be able to spell it, but I know when it’s wrong.” She and the dictionary became very good friends.

Connie will be missed more than words can say by her family and friends. Her arrangements are shown below. In lieu of flowers, the family asks that you make a donation to the Boyle County Humane Society in her name. She helped, financially, to fund the organization and she always did everything possible to continue supporting them. She would love knowing that she helped them.