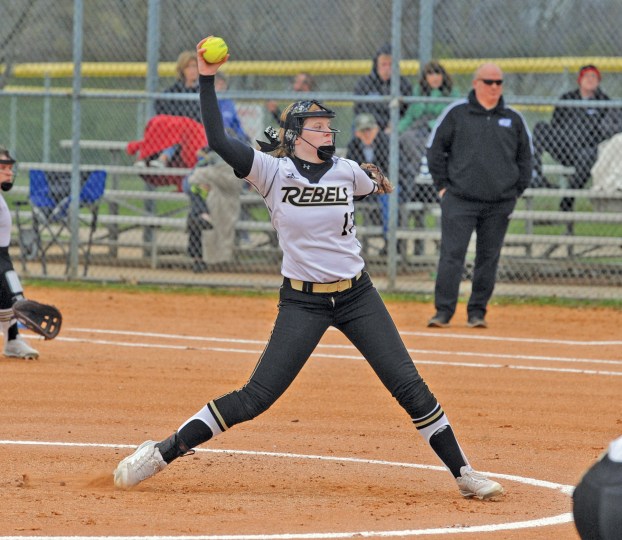 The Boyle County pitcher threw three perfect innings, allowing no baserunners while striking out seven as the Rebels beat Danville 18-0 in three innings on Tuesday at Millennium Park.

Boyle jumped out to a 4-0 lead in the first inning, highlighted by a two-run homer from Keely Bowling.

Lay struck out the first six batters she faced as Boyle took a 6-0 lead into the third inning.

“I thought she did an excellent job,” Boyle head coach Brian Deem said of his pitcher. “We got up big in the second inning and it would’ve been easy for her to lose her sense of urgency and just sling it. And she didn’t. She kept working on her release, kept working and trusting herself. I told her that, that’s what I’m most impressed about with her day. It wasn’t the strikeouts, it was the fact that she was still focused on throwing her pitches well and finishing her pitches. That was a big plus on her.”

Lay and the Rebels kept their foot on the gas in the third inning, plating 12 runs in the top half of the frame.

She wasn’t the only Boyle player who was perfect: Mattie Robbins went 3-for-3 at the top of the order for Boyle with three runs scored and two RBIs.

Boyle’s strong day at the plate was at the hands of Danville’s Peyton Young, who finished the game with two strikeouts.

The Admirals fall to 2-4 after the loss: Danville lost two, won two and now has back-to-back losses.

For the pattern to continue and Danville get back in the win column, head coach Jason Spencer said his team has to be able to refocus on its next game.

“More than that, it’s the fact that we’ve just got to keep working,” he said. “It’s what I preach day after day and after every game, practice, whatever. We’ve got to get to the point where we’re playing the next play.”

The Rebels’ win is just 24 hours after allowing Louisville Eastern to come back on Monday night. Deem said his squad was ahead 2-1 entering the bottom of the sixth inning.

“We lost complete focus, Eastern put the ball in play and we didn’t make plays and it cost us the game,” Deem said. “I was very disappointed in that. That’s what we talked about today, keeping our focus and staying sharp.”

The Rebels were sharp, and Deem expects more of the same as competition stays high the rest of this week.

“We go to Bullitt East tomorrow, traditionally a solid team … we’ve got to be able to take a win like this, come tomorrow and see a change in speed of play and exceed that speed of play,” Deem said. “This weekend, we’ve got our hands full with Butler, Ashland Blazer and Boyd County. All three of those teams could beat us if we don’t come to play. We’ve got a lot ahead of us before we start district play again next week.”

Spencer credited the Rebels and said they’re a team that he wants his squad to look like in the future.

“Give Boyle County complete credit, they’re a very good team,” he said. “They are where we want to get to. It’s going to take dedication and hard work and continuing to build on the little things.”

Danville’s eighth win in a row was as decisive as the first. The longest winning streak in the region continued... read more