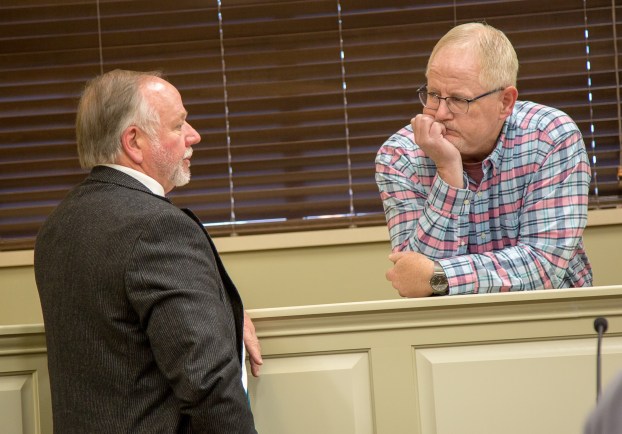 City Manager Ron Scott provided commissioners with a recommendation to take action on four condemned properties: 318 Caldwell St. and 637 Old Shakertown Road, a pair of now-vacant lots with dozens of city liens against them; and 222 E. Martin Luther King Boulevard and 702 Perkins Ave., a pair of dilapidated houses that have been condemned for years but haven’t been demolished.

Scott’s recommendation was to proceed with court action against the Caldwell Street and Old Shakertown Road properties, forcing their sale at a master commissioner’s auction; and to authorize the city to seek bids for demolition of the East MLK and Perkins Avenue properties.

Scott brought the recommendations at the request of Mayor Mike Perros and the Danville City Commission. The four properties are part of a larger list of seven condemned properties around Danville the commission is interested in cleaning up. The city has multiple liens against most of the properties for things like demolition of unsafe structures and mowing of tall grass.

Commissioner Rick Serres questioned why Scott had recommended the four properties with the largest liens for the city to tackle first. Serres said those four are the ones the city is most likely to take a financial loss on; he suggested the city could break even on the forced sale of other properties on the list.

City Attorney Stephen Dexter said it’s important for the commission to understand that “it will be unlikely that the city will recover its money on any of these actions.”

Commissioner Kevin Caudill noted one of the other properties not recommended by Scott is also a vacant lot — 211 N. Fourth St. He suggested the city could take action on that fifth property at the same time.

“I don’t disagree with you,” Scott said, adding that “we can’t do everything at one time.”

Scott said Danville has $90,000 in its current budget for demolition of condemned properties. It had been anticipated a large portion of that money would be used demolishing the old Sutton’s restaurant building, but then the owner of the property agreed to demolish the building. The $90,000 should be more than enough to cover the costs of pursuing all four recommended properties, including demolition of the two standing structures, he said.

Scott noted the processes of demolishing structures and forcing master commissioner’s auctions are lengthy and it could still take a long time before the properties are free of their liens and available for development again.

Commissioner Denise Terry said she is concerned about demolishing structures without first considering whether the structures can be saved. She said she was uncomfortable voting to proceed until she had more information about the condemned structures involved.

Terry’s concern led to the tabling of a motion from Commissioner J.H. Atkins to approve proceeding with all four recommended properties and the additional vacant lot at 211 N. Fourth St.

Scott said the city would provide commissioners with a more detailed report on the current status of the condemned structures at the commission’s next meeting; at which time Atkins motion could come off the table and be voted on.

• 222 E. Martin Luther King Boulevard (PVA value $15,000): This house was condemned in 2007 but has not been razed. The city has 43 liens on the property totaling about $10,000 and there are 10 years worth of delinquent school taxes, in addition to one other lien-holder.

• 134 Wilderness Trail Road (PVA value $15,000): This unique case involves a house that has been condemned since 1989, but was sold through foreclosure in 2012 for $100, causing all liens prior to that date were “extinguished.”

The Danville-Boyle County Parks and Rec Ad Hoc Committee meeting got off on a rocky start Monday morning when the... read more