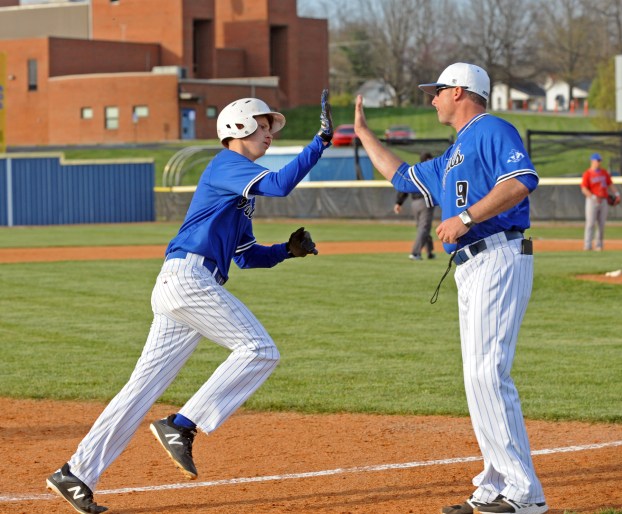 All five were from freshmen.

The Admirals were in command from the start against the Patriots, scoring five runs in the first inning and finishing with a 12-4 win. It’s the 10th win in a row for the 11-1 (2-0) Admirals.

“We swung the bats well today. I thought we lost focus there in the third, fourth innings,” Danville head coach Paul Morse said. “We got a lead early, then everybody started going through the motions. But we swung the bats well. You score 12 runs, not too many complaints there. We had a couple guys that got good pitches in good counts and were able to clear the fence.”

It started early: Brennan Washington set the stage with yet another hit by pitch, and he was scored when Ethan Wood cranked the first home run of the day on a line drive shot over the left field fence.

“I think he’s got to be leading the state in stolen bases, too,” Morse said. “He had 22 coming into today and had one more today. He’s a great guy, tablesetter at the top of the order. He finds ways to get on base and works the count and does a great job.”

Freshman Preston Barnes was next to homer, scoring courtesy runners Riley Lark and Noah Goodman, who were in for Christian Howe and Cayden Shaver, respectively.

Howe got the start on the mound for Danville. He tossed 3.2 innings, striking out three. He allowed three runs (one earned) on five hits and two walks.

“That freshman class is a really good class and it showed today,” Morse said. “We’ve started two freshmen in back-to-back days in district, I don’t think I’ve ever done that before either. They’re playing well and we’re getting good leadership from the older guys we do have. I’m proud of them today.”

Zack Hazlett would score Brady Martin on an infield single in the top half of the second inning, but the Ads were quick to respond: Washington was hit by another pitch, stole second and was moved over by Jacob Crank. Wood hit a sacrifice fly to center to score Washington, making the score 6-1 after two innings.

In the third, Howe kept Lincoln off of the basepaths, striking out two batters. In the bottom half of the frame, he hit a solo shot to make the score 7-1.

Eighth-grader Brady Morse would ground out later in the inning, but Bryson Young scored from second base on an errant throw to third.
After three, Danville led 8-1.

Lincoln would plate two runs in the fourth inning when Seth Young singled with the bases loaded on a rocketed grounder that skirted past Danville shortstop Preston Barnes to score Jacob Baird and Zack Hazlett.

The bases stayed loaded and Howe was removed for sidearm thrower Jaden Larmour, another Danville freshman. He needed three pitches to get Lincoln’s No. 3 hitter Sawyer Carrier to pop out to second base.

“He’s hard to hit, he’s a little funky, coming at you from that angle,” Morse said. “He’s been successful, we brought him in for a save in the spring break tournament. I have all the confidence in the world in him right now, we just needed to get through that inning. Three pitches and he was done for the day. He did a great job there. Then (Cayden) Shaver came in and did well down the stretch.”

Wood would hit his second dinger of the day in the fourth — a two-run shot over the center field fence — to cancel Lincoln’s fourth inning.

Lincoln would score one run in the fifth inning — again loading the bases — but Cayden Shaver got out of a jam with a strikeout. Howe added another home run — this time a two-run shot — in the sixth inning to put Danville ahead 12-4.

Shaver finished with three innings pitched, allowing one run on two hits and a walk while striking out five.

Lincoln might have scored four runs more than Tuesday’s 8-0 shutout, but head coach Tee Ellis wasn’t happy with his bats after the game.

“They weren’t good, our bats should have been better,” he said. “We’re still taking too many close pitches with two strikes on us. We’re not getting the timely hits that we need.”

The Patriots finished with nine runners left on base.

“That’s how it has been all year, besides last night,” Ellis said. “We’ve been getting runners on but we can’t seem to get them home. It’s not positive because we’re not doing the things we need to do to score.”

The solution for Lincoln?

“Just working on situational hitting in practice,” Ellis said. “We do that almost every day, if it’s not practice it’s before a game. We’ve got to figure out something that clicks with them as coaches. We’ll try to do that this week.”

STANFORD – Ethan Wood had plenty to smile about on the mound for Danville on Tuesday. The freshman right-hander was grinning... read more