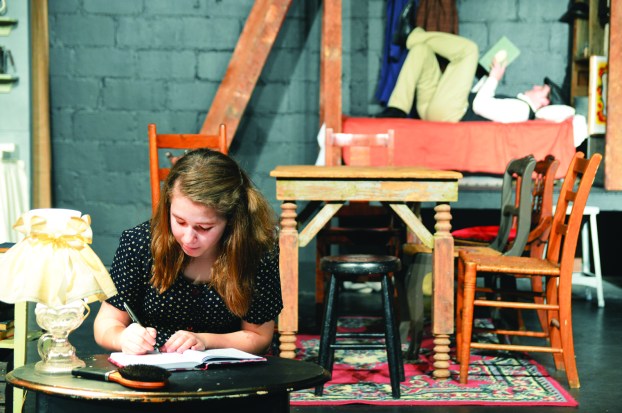 (Photo by Bobbie Curd) Sofie Farmer, as Anne Frank, writes at a table while Elijah Brown, as Peter, hangs out in the bedroom portion of the one-room dwelling the family lived and hid in for "The Diary of Anne Frank."

More than entertainment: ‘Diary of Anne Frank’ is show that runs the gamut of emotions, director says

Most people know the story of Anne Frank — the dark, grim realism behind the truths written in a childhood diary by a young girl tucked away in a one-room home with her family, hidden from troops setting out to rid the Netherlands of the Jews.

“Everyone knows how this ends, so I understand the ‘grim’ ideas,” says director Jan Sheffield. “But, here’s the thing — people go to theaters to be entertained. But for different reasons. For a love story, to be touched or even sad. For a comedy, to laugh, or for a mystery — to be in suspense. And some people’s idea of entertainment is to be scared to death. Honestly, this show has all of that.”

“The Diary of Anne Frank” opens Friday at West T. Hill Community Theatre, and has been quite a historical project for Sheffield, to the point of obsession, she admits. 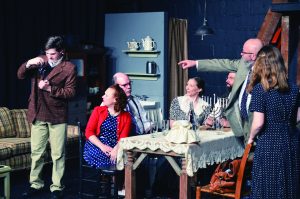 “It’s been fun, lots of work though,” she says, explaining how it’s a very prop-heavy period piece. “I want it to be as accurate as it can be … I’ve gotten kind of crazy with that, going to antique stores and finding older glassware, for instance, that looks like it could’ve been on the table in the 1940s. I’ve gotten a little obsessed with that.”

But it seems to have paid off. The set is very realistic looking, a completely open one-room dwelling where at least 8 of 10 actors spend the entire play. After all, that’s what they did in real life, Sheffield says.

And that’s a lot of people on stage together at all times. So they have to get along — really well.

“When you’re casting, you don’t know what the chemistry will be among the people you choose. It’s been great with them,” Sheffield says. They have some folks who are playing older roles than what they are, and some who are playing younger.

“But it has all worked out very well because of the way they get along with each other. That’s important when it’s something that’s this intense, you have to have a good relationship. Just like the folks who were in hiding together in real life,” she says.

On a recent Tuesday evening during dress rehearsal, the actors buss around the theater as they prep for a scene. They cut jokes with another before starting, enough so to make their director tell them “Come on, it’s time,” and to get to work on their scene. They do seem to be a tight-knit cast.

Sheffield says she encouraged them to look into each of their characters, find out who they were since they were all real people and exist in history. “They really embraced that, and it’s kind of exciting.”

There’s a few first-timers on the stage for the production, someone who has returned after not acting for several years, Sheffield says, and a very big role being played by a young person. “Sofie Farmer as Anne Frank — she’s wonderful. It’s a lot to handle emotionally.”

The lights are being handled by newcomer Jill Sorise, who recently moved to the area and has jumped into volunteering at the theater, Sheffield says, and lots of help has been given by LuAnne Littlefield, someone she refers to an integral part of pulling the whole thing off. “We’ve had fun pulling this together,” Sheffield 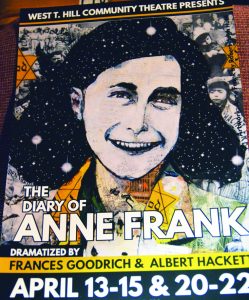 Sheffield says the play will appeal to everyone. “My 7-year-old grandson was here for a rehearsal one night, and he was fascinated by it all, really interested and asking questions. A second-grader I know saw the costumes and was asking me about it … I think it is good for all ages. There’s a lot going on all of the time, so that’s always interesting for young people.”

But just as important as entertainment value, Sheffield says she hopes audiences have an admiration for these families. “Anne Frank in particular is so amazing and brilliant for such a young person — to be smart enough to write down the things she felt. She wanted to be a writer, a journalist. That’s one of the reasons her father decided to publish her dairy. I hope people will remember her … and are just aware of the world around them, and what it means for one group of people to be set apart. The damage that can do.”