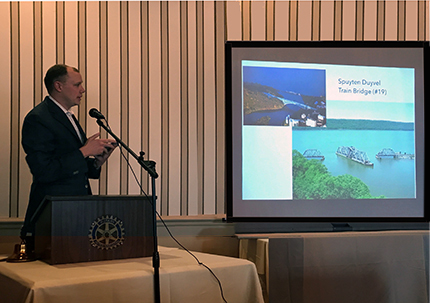 Kyle Poland graduated from Danville High School, with six varsity letters. At Centre College, he was a “most valuable” cross-country runner, and “most valuable” swimmer for three years.

After graduating from Centre, Poland moved to Ohio where he continued to pursue triathlons, but also earned his securities licenses and his Ohio life and health insurance licenses.

Poland’s interest in endurance swimming focused on the “Triple Crown” created by the International Marathon Swimming Hall of Fame, and included: 21 miles across the English Channel; 28.5 miles around Manhattan Island in New York: and 21 miles between Santa Catalina Island and the mainland.

The big event is the English Channel, which he did in 2013. Poland completed the 22-mile swim across the English Channel on Aug. 1 in 11 hours, 19 minutes. He dedicated his crossing to Diana Davis, whom he met through Miles That Matter. After a decade of battling cancer, Davis died just after Poland’s successful crossing.

With the first leg of the triple crown behind him, Poland applied for entry in the 20 Bridges Swim around Manhattan Island.  He was accepted and his family made the trip to New York with him.

“It was a great way for the kids to experience Manhattan,” Poland said.

Six groups of 12 swimmers started the 20 Bridges Swim over the weekend ending on Sunday, July 23, 2017.  The swim covers 28.5 miles around the island of Manhattan. All swimmers are accompanied by an official observer and kayak/kayaker. There are basically two rules: no wet suites and the crew cannot touch the swimmer. Poland’s group came from around the world. There were entrants from Poland, Australia, Israel, Switzerland United Kingdom, Mexico and Scotland.

They departed from Battery Park when the tide was rising, which was intended to give swimmers a push after they entered the East River for the first leg of the journey.  His first bridge encounter was the Brooklyn Bridge.

“I rolled over and looked at the underside of the bridge — something not many people get to experience.” Eighteen bridges later, Poland encountered his favorite, the Train Bridge. It occurs at the point the Harlem and Hudson rivers merge, and begins the last leg down the Hudson. Poland was particularly happy the bridge was open at his time of passing, which meant he did not have to pass under its very low ceiling.

After entering the Hudson River, Poland encountered the George Washington Bridge, a double deck bridge that connects Manhattan with New Jersey.  The winner of his group, Mark Deans, set a course-record with a six hour, 34 minute time. Poland finished the 20 Bridges Swim in seven hours, 16 minutes.

The third leg of the Triple Crown is the 21 miles of shark infested water, from Catalina Island to the beach on the mainland.  “My wife was all for the other two, but she doesn’t want to raise the kids as a single parent.”

Director of the Heart of Danville presents information to Kiwanis