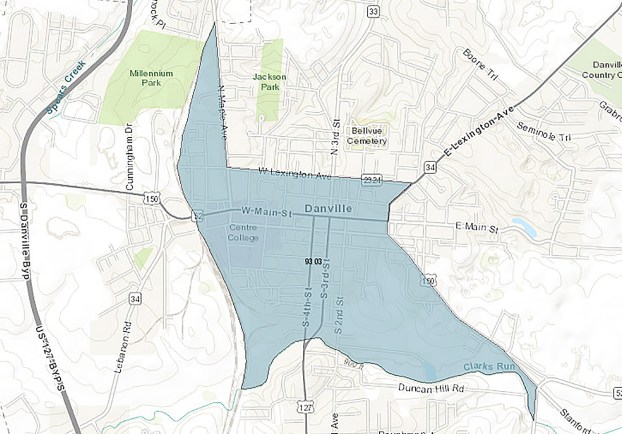 The city’s downtown business district is one of 144 such zones created by Gov. Matt Bevin on Monday, according to the Danville-Boyle County Economic Development Partnership.

“The designation offers significant federal tax breaks and deferrals to entities and individuals investing in Opportunity Funds, which support development projects within one or more zones,” according to a news release from the governor’s office. “The Kentucky Cabinet for Economic Development will oversee the state’s program through the Kentucky Opportunity Zone Initiative and today launched KYOZ.org to provide information on this widespread and promising opening for economic development.”

Boyle County leaders had originally sought approval for a larger economic opportunity zone that would have included south Danville, Junction City, the Danville-Boyle County Airport and parts of the Forkland and Mitchellsburg areas of the county.

The originally requested zone included four U.S. Census tracts. The designation of economic opportunity zones was made possible by a provision in the Tax Cuts and Jobs Act of 2017. The governor of each state is allowed to designate up to 25 percent of his or her state’s Census tracts as opportunity zones, as long as those Census tracts meet certain thresholds concerning income levels.

On March 21, Gov. Bevin nominated the maximum number of tracts for Kentucky — 144 — to be designated economic opportunity zones. On Monday, “Kentucky was among the first 18 states to have its zones certified by the U.S. Treasury and the Internal Revenue Service,” according to Bevin’s release. “Ultimately, every Kentucky county that submitted a proposal received at least one opportunity zone.”

“Of course, I would have personally preferred to have all four tracts included to maximize opportunity over a larger area of Boyle County,” EDP President Jody Lassiter said Wednesday. “However, the downtown Danville census tract has the highest poverty rate — 24.5 percent — and the lowest percentage of median income — 76.2 percent — of the four tracts we proposed. Thus, statistically it is considered to have the greatest need for the (opportunity zone) designation.

“That 144 tracts in 84 counties were recommended and certified indicates just how incredibly competitive this process was. Having the (opportunity zone) in the downtown Danville census tract will align well with the (tax-increment financing) district under discussion as well as other economic initiatives.”

“The opportunity zones approved today by the U.S. Department of the Treasury provide one more reason for companies and businesses to consider locating in Kentucky,” Bevin stated in his release. “Kentucky will maximize this golden chance to attract economic development projects to communities most in need across the commonwealth, and the Kentucky Opportunity Zone Initiative will strengthen and rebuild both rural and urban areas. Whether along the Mississippi River in West Kentucky, throughout West Louisville’s neighborhoods, or in the heart of Appalachia, these zones will spur investment, growth and community development.”

Opportunity zones aim “to encourage and attract significant institutional, corporate and individual investment” in “regions that have not experienced the same economic development success as others,” according to Bevin’s release.

According to Boyle County’s original application, there were 12 economic development projects in the area that could have benefited from the creation of an economic opportunity zone. Two of those projects remain possible within the smaller approved zone:

• “the planned development of the Hub’s third-floor;” and

Numerous other projects on the original list are targeting locations along the south Danville Bypass, an area that falls outside of the approved zone.

SO YOU KNOW: Boyle County Schools and Danville Independent Schools had not cancelled Friday as of Wednesday afternoon. Lincoln, Garrard and... read more