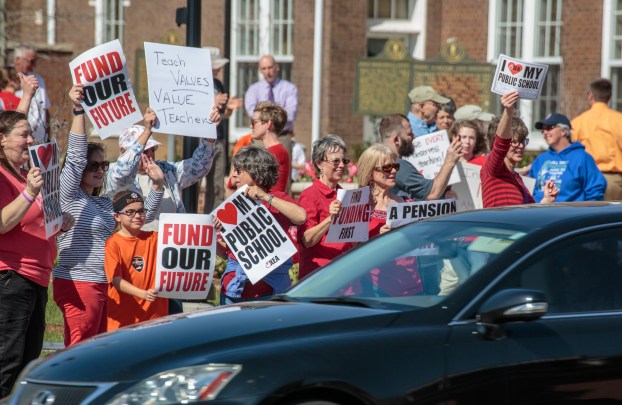 Protest in downtown Danville brings those concerned about education cuts together 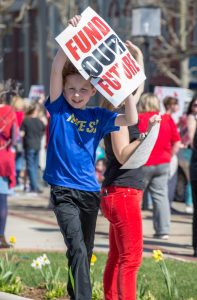 Fighting for public schools — that’s what brought educators, students and parents to the streets of Danville and to Weisiger Park Thursday afternoon to join the Rally for Public Schools.

“I am here today because, like my colleagues, being an advocate for young people is not only my job, it is also my passion. I am here today because I love this community … I truly believe in public education. I believe education is a fundamental right for all young people in our state,” said Blossom Brosi, speaking before the teachers from the county’s three school districts, the Danville Independent Schools, Boyle County Schools and Kentucky School for the Deaf, along with neighboring counties.

Brosi is a teacher at Danville High School and one of the organizers of Thursday’s rally, which began with marches from Jennie Rogers Elementary and Boyle County High School. Once at Weisiger, they cheered and chanted, waving at cars which honked as they passed.

Brosi said she opposed current legislation, “which takes our hard-earned tax money and uses it to give handouts to the rich and to the corporations. I believe it belongs with our children.” She said she believed that education should be equal and for all students. 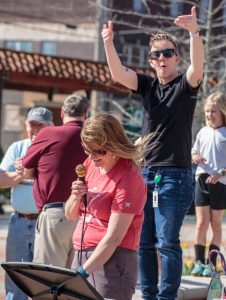 “We want our schools, our public schools to be fully funded. We want our students to be able to afford higher education in Kentucky. We teachers and other public servants, we do want the pensions that we paid into. We’re not asking for anything more than our own investments,” Brosi said. “But what’s even more important to us than our pensions? It’s our students. We know that the new pension law changes the very nature of our profession and will have a devastating impact on our kids. We know that what you do to Kentucky’s educators, you in turn do to Kentucky’s children.”

Brosi said it wasn’t just about the teachers. It’s about the students and the future students.

“It’s about the future of public education,” she said.

BCHS teacher Eli Edwards, another organizer, said teachers are getting the opportunity to live out the lessons in the books they teach.

“I grew up as a kid on free and reduced lunch, who knows the importance of these programs. Education is the greatest equalizer that this country has,” Edwards said.

He said while it is believed that the Boyle and Danville districts will be able to withstand the budget cuts that are being proposed, others may not.

“Any injustice anywhere in the state of Kentucky, to any school, is an injustice to Boyle County and Danville,” Edwards said, pointing out Mercer, Lincoln and Garrard counties, which all have said they will not be able to last the cuts. “We have to be concerned about that, about educators and the state of education everywhere in the commonwealth. Together, that’s when we achieve great things.” 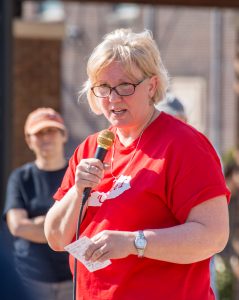 “My real concern with this legislation is the demise of public school … this idea, leading back to some kind of segregation that has those who can moving and those who can’t staying in poorly-funded buildings with teachers who don’t want to be there,” she said.

Fitzwater started by sharing that she had been taught by 45 different teachers throughout her school career, all of whom know her by name. To them, she’s more than just a number, she said. Fitzwater said she went to Frankfort last Monday with a group of students and teachers from across the state who traveled to protest in the capitol as legislators reported for work. She talked about how Attorney General Andy Beshear has expressed his intention to sue regarding the pension bill, as he has found 22 points which violate the law.

“We should reserve the right to throw this bill out the window because it violates our rights,” Fitzwater said.

She encouraged legislators to “do what is right, not what is easy.” 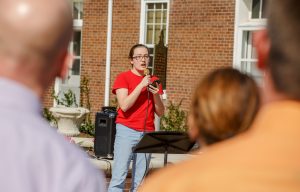 “That is what my teachers have taught me,” Fitzwater said, as the crowd erupted in cheers. “Peoples’ livelihoods are at stake. Do not be so quick to dismiss that, because one thing is for sure — for those of us who can vote, we will remember in November.”

She said she stood for her teachers.

Sofie Farmer, the daughter, granddaughter and great-granddaughter of teachers, said, “Here’s what I know. I know that because of public preschool, I have the confidence to get up here today.”

She said it was her preschool teacher who taught her to “stand up and use my voice when I notice something is wrong.” Future students, she said, won’t be able to learn such skills, because of proposed cuts to public preschool programs.

Proposed cuts to extended-school-services, known as ESS, will also hamper students’ abilities to learn, because they won’t get the additional support they need after school, Farmer said, explaining she has used that program herself when she struggled.

Other proposed cuts, Farmer said, are to a mentoring program for new teachers that has been in existence for 35 years and to continued professional development training for teachers.

“Teaching is hard. It takes a really long time to be able to do it well. And new teachers need support,” she said, referring to the Kentucky Teacher Internship Program (KTIP). “Just like kids, teachers keep learning as well … Due to proposed cuts, not as many teachers will be able to attend trainings or any trainings at all. This is detrimental to kids in the classroom because they don’t get the best learning possible.” 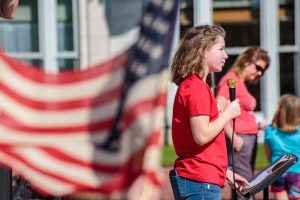 Farmer also said the cuts to the pension, which she’s “learned a whole lot about” recently, will make it harder to get the best teachers for the jobs.

Above all, she said, the funding matters for the future of education in the Boyle and Danville community.

“Fund our schools to fund our future,” Farmer said.

Hall said it was educators who helped him adjust to living in Danville when he moved to the town in the third grade.

“I quickly realized the power of my school community. It wasn’t a single person who made school better for me, it was the joint effort of everybody I saw each day,” Hall said, sharing stories about his former bus driver, teachers who invited him to join after-school programs, a janitor who helped him and a middle school teacher who kept him calm during a lock down. “I realized the power of my teachers as a collective. I knew they cared and this realization made going to school each day just a little bit easier.”

Hall said he knew the community supported educators, even when people in Frankfort don’t.

“Every single person you see every day has your back as well,” Hall said.

The speeches concluded with retired Casey County teacher Lydia Coffey, who shared she has filed as a write-in candidate to run against Daniel Elliott. She encouraged everyone to use their “teacher voice.”

“I have spent days on end since January in Frankfort and I have watched as our democracy doesn’t seem like a democracy anymore. I have seen us be bullied by the school yard bully. It is wrong. As a teacher, we all have that voice, that voice that we can spread education to our children, that voice that tells our children what’s right and what’s wrong. As teachers, it’s time that we use our voice to let Frankfort know that what they are doing to public education in our great commonwealth is wrong,” Coffey said. She said even though they didn’t teach together, they were colleagues. 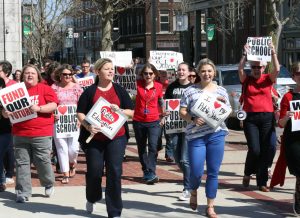 Kendra Peek/kendra.peek@amnews.com
Teachers, students and parents from the Danville Independent Schools marched from Jennie Rogers Elementary School on Thursday afternoon as their Boyle County counterparts marched from the Boyle County High School, all converging on Weisiger Park for the Rally For Public Schools. Educators from the Kentucky School for the Deaf and neighboring districts joined the event.

“I cried when I saw you all walk up because you are my colleagues,” she said.

Coffey shared about other bills coming up, such as Senate Bill 4, which would move the election to 2019 and House Bill 169, known as “the gang bill.” Coffey said it was also important to remember law enforcement officers and firefighters fighting with the teachers.

“It is time to use our voices, not just now but for the future. Let’s teach Frankfort how to collaborate,” Coffey said. “Use our teacher voices to hold them accountable.”

Afterward, Brosi said she was impressed with the turnout, which included Superintendents Keith Look and Mike LaFavers, elected officials and city and county law enforcement officers. Edwards guessed there to be close to 200 people at the rally.