‘Always Patsy Cline’ goes up this week at RECT

Ragged Edge Community Theatre in Harrodsburg goes up Friday with “Always Patsy Cline,” a story of the unlikely friendship between Cline and a single mother of two from Houston, says Managing Director Allan Barlow. 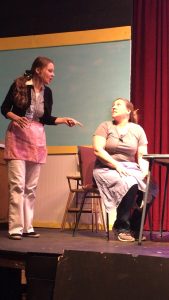 “The show has a live band and features 27 of Patsy Cline‘s best known hits.”
Barlow says this production is basically a remount of the one that was done at RECT seven years ago, with Natalie Berry Marshall as Cline.
“Natalie expressed interest in doing the show again and I jumped on the opportunity. I called Bonnie Feeback, who played Louise the last time and ask if she would be interested in doing the show again. She also jumped at the chance.”
Barlow says the band features some great local musicians including Wendy Hood, Brad Logan, Zack Taylor and Brian Mollett.
“The first production was the most popular show RECT has ever produced, and this one is shaping up to be just as popular. We have never had as much pre-sale for a show as we have had for this one. If folks want to see it — and they really should — I strongly advise calling ahead and making reservations. I anticipate quite a few sold out performances”
IF YOU GO
“Always Patsy Cline” goes up Friday-Sunday and April 19-22. Showtimes are 7 p.m. Thursday-Saturday, 3 p.m. Sundays. Tickets are $10/adult, $9 for seniors, and $8 for kids 12 and under. For more information or to purchase, visit  raggededgetheatre.org/ or call (859) 734-2389.
You Might Like

Opportunities for artists, businesses and friends of the arts

ARTS COMMISSION  Press release  The Arts Commission of Danville-Boyle County has received a matching grant from the Fund for the... read more