History book on cemetery to help fund its maintenance 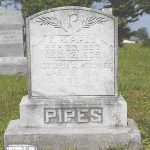 Photo copied from book
A marker for Elias Hardin Pipes is one of the newer ones in the cemetery.

Doctor’s Fork Baptist Church in Western Boyle County beginning with the establishment of the church in the early 1800s has been published.

Proceeds of the book by author Robert J. Pipes will go to the Harmon Pipes Gray Family Association to be used for maintenance of the cemetery and markers.

The Family Association is named for the early pioneers John Gray and Lucinda Jones, Michael Harmon Sr. and Margaret Trump and John Pipes Jr. and Mary Morris who settled in the late 1700s near the site of the church and cemetery. 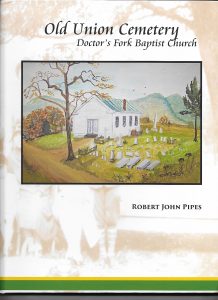 The Union Meeting House was founded by the Presbyterians and was shared by four different denominations before it became Doctor’s Fork Baptist Church.
The old frame church was razed and a new church was built about 60 years ago within sight of the cemetery and near the intersection of Ky. 34 and U.S. 68, west of Perryville.
The book has the history of the church and cemetery from about 1800. The earliest markers in the cemetery are Mary Gray in 1808, Robert Mitchell in 1818, and John Pipes Jr. in 1821. The association thinks that earlier graves are probably there, but there is no documentation.

History of the original families and descendants are included along with a listing of grave markers, faded and broken stones and photographs of the cemetery taken in the past. 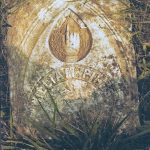 Photo copied from book
A broken grave marker for William Pipes has a finger pointing to ‘Gone Home’.

The original deed made in 1803 for the church lot and a complete inventory and site map of the burials in the cemetery also are included.
Bob’s son contributed a detailed study of the Battle of Perryville’s impact on the area around the church and family farms that were overrun by 20,000 soldiers on Oct. 8-9, 1862, with maps of the action.
Numerous pages in the book are filled with photographs of past reunions and gatherings, hosted by the cemetery association.
Photos of some of the ornate grave stones and photos of early and current families also are included.
The book is dedicated to John Sheperson who had a great passion for the history of the cemetery and community along Doctor’s Fork Creek. John shared a great deal of information for the book.
Ten pages of Sheperson’s research in The Advocate-Messenger show entries covered by the newspaper from 1880 to 1922.
A preview of the book is available on the Pipes Website at www.pipesfamily.com.
The book is available by contacting Bob Pipes via email at pipesb@pipesfamily.com or calling (414) 442-5952 in the evening. The cost of the book is $40 and includes tax and shipping.
You Might Like

Guerrant named to Boyle school board

Boyle County native Laura Guerrant has been named to the Boyle County Board of Education, filling a spot vacated by... read more