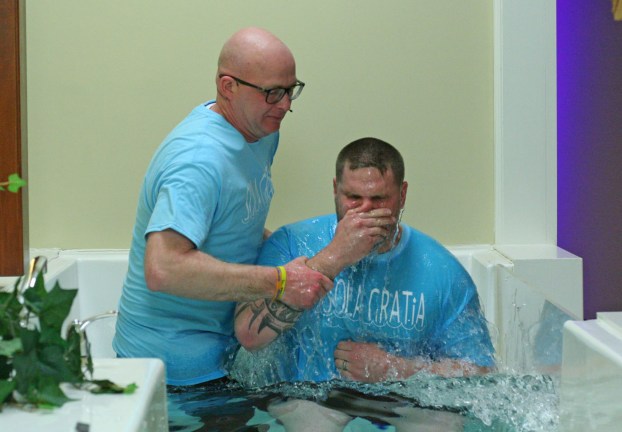 For most, Sunday is a day of rest, but not for Pastor Choe Sergent at Junction City First Baptist Church.

He arrives at the church at 8 a.m. The first service starts at 9, so he spends an hour doing a walk-through — making sure the welcome signs are out, checking the foyer and checking on volunteers, then makes himself available.

Being available is important, he said.

“I think people make the decision whether they’re going to come back to a church before they ever enter the sanctuary,” Sergent said. “If you get to a church and you’ve never been there before, it can be a scary experience. If you have trouble finding things, it will make you hesitant about returning.”

There are three morning services at Junction First Baptist Church. 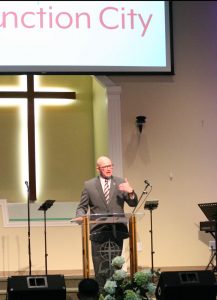 “There’s no recovery time. You’re immediately on point again,” he said. “As soon as (one) crowd dismisses, I’m literally shaking their hands while they’re leaving and shaking another group as they’re coming in.”

On Sunday, there was a speaker, Joe McGee. Sargent takes the stage, welcoming attendees. He introduces a Campbellsville University student, part of the school’s Church Outreach, and introduces McGee, then descends from the stage. The speakers begin.

At the end of the service, Sergent stands up front for the benediction before handing the service to a deacon to lead prayer and dashing out to the back. He greets people on their way out.

As a couple leaves, Sergent shakes their hands and said, “Is there anything I can do for you?” 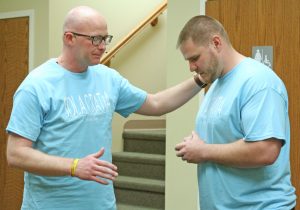 Before the 11 a.m. service starts, he stands in a back room wearing waders and speaking a man about to be baptized. They pray and head into the baptism, then in full view of the crowd.

After the baptism, Sergent slips into jeans and sport coat, then out to introduce the day’s special guests. As the service ends, he heads to the back to shake hands.

He’s changed some things, like recruiting more volunteers to help meet the needs of the 400-700 members.

“I can’t meet everyone’s needs,” Sergent said. “We’re trying to point them to Christ. Our goal is to develop people that are meeting each other’s needs through community and relationship.”

Sargent will spend another hour at the church. He meets with church staff for a few minutes, to talk about the services.

Then he rests for a little while. The afternoon is spent with his family, before he returns at 4:15 p.m.

Sunday was the start of their 6 p.m. small groups, which would be meeting for several weeks instead of an evening service.

“You’re painting with a broad brush in that sanctuary. Everyone’s going through such different problems, it’s hard to find common ground, other than Jesus,” Sergent said. The small groups help with that.

He leads a group to help attendees learn more about the different parts of the church.

“That way, they know this is their church,” Sergent said.

Even though it’s a hard job, he said being a pastor is an “honor.” 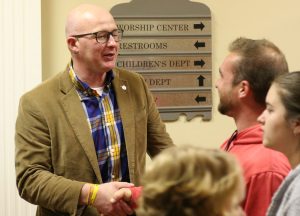 “I think it’s the greatest job in the world. It’s high-stress, it’s demanding. But I wouldn’t ever do anything else,” Sergent said. “There’s hard days, there’s days you want to quit … but there’s more days where you see people’s lives change and you see a difference made. You see marriages restored, you see people that are freed from addictions. You see people begin to discover who they are and have a purpose and meaning.

“That makes all the difference in the world.”

Chamber plans to be more inclusive after hearing business owners say the town was ‘an afterthought’ Perryville merchants have captured... read more