When the final bell rings in May, Jennie Rogers Elementary School will officially close its doors, but a committee of current and retired staff are doing their best to make it a time of celebration for everyone who attended or worked at the school since it opened in 1953. 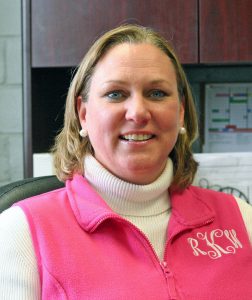 “We feel like we’ve been a positive force on this community for a very long time. Some people are really sad about this,” said Principal Robin Kelly. “We appreciate being part of the community and there have been a lot of really good things to come out of Jennie Rogers over the years.”

So, they’re giving people a chance to share those memories and celebrate the good times at Jennie Rogers Elementary in a series of events to close out the year.

Anyone can visit the school, where they will find the current teachers in their rooms and they will be guided by student leaders. The students, Kelly said, will explain the new technologies to visitors.

There will be signs on each door, for visitors to sign their names and share what grade they were in when they were in that class.

When it opened, the new school had 26 classrooms, two rooms in the basement, a library and a gymnasium; it housed students in kindergarten through grade eight.

Kelly said they have also been collecting old photos, specifically classroom photos, from the school and are going to set up displays to show those off to visitors.

“We have a lot of stuff from Miss Jennie Rogers, her original teaching certificate and some things personal to her we have behind glass. There will be more of that kind of stuff to come,” she said.

It’s all the little memories and moments that they want to share, Kelly said, which are important when remembering Jennie Rogers Elementary School.

Kelly said it had been a bittersweet year in many ways, starting from the first day of school.

“Everything this year has been ‘our last …’ It’s always been prefaced by those words. We think by hosting these kinds of things, people will remember all the really good stuff that came from Jennie Rogers,” Kelly said.

For the 2018-2019 school year, students in second through fifth grades will be housed at Edna L. Toliver Intermediate School, where Kelly will be the principal. The current Toliver principal, Ron Ballard, has been named the director of support services in the district, while Leo Labrillazo, the principal of Mary G. Hogsett Elementary, will remain at the school after it becomes the Mary G. Hogsett Primary School.

Eventually, students in preschool through first grade will be housed at Hogsett, but the board approved a plan to house those students in the Jennie Rogers building for one year, while their building undergoes renovations.

While those students are going to be housed in Jennie Rogers, she said they will be Hogsett students.

“Leo (Labrillazo) has been very intentional about, when (they) move over here, this is Hogsett next year,” she said. “He needs to do that, to build his school community.”

Once the Hogsett students are returned to their building, the Jennie Rogers building will become the home of the district central office. The board has said they expect the name “Jennie Rogers” to be incorporated into the future of the building.

Superintendent Keith Look has said in the past that all the staff will be assigned based on their grades and skill sets, not that they will stay with those whom they teach currently. Kelly echoed that.

“I’m not going to take Jennie Rogers Elementary and transfer it to Toliver … I’m looking forward to creating new traditions and making that school fabulous,” she said.

There’s a lot of change happening, Kelly said, one that will impact three-fifths of the district.

For Kelly, the end of the year will be especially touching. She started her teaching career at the school, spending seven years there. She returned to JRE as the principal in 2015.

“Each school has their own little culture and climate. This school, in particular, is super nurturing. Not just from staff to student, but from staff to staff. People take care of each other here,” she said.

But before Kelly taught at the school, she was a Jennie Rogers Cougar.

“My days as a student here, those are really fun memories, great times,” she said, tearing up. “Some of those people that taught me, I taught with when I came back as a teacher … It was really special.”

Kelly said there are other plans in the works to celebrate the last month of Jennie Rogers Elementary in it’s current role in the district.

A special farewell dinner will be hosted in May, which will be a dressier occasion, she said, complete with white tablecloths and real china. Presentations will feature special guest speakers, former students and staff, and videos to show.

“Basically helping people walk down memory lane. We felt like that was the proper way to wrap all of this up in a nice, pretty package,” she said. “It’s going to be a fancy event … We wanted to make a big to-do about it, because we think it’s a big to-do.”

Reservations are required for the event and invitations have been sent to current and former staff members. Anyone interested in attending the farewell can contact the school as soon as possible, as some additional seating is available but space is limited, Kelly said.

Students will also have a chance to participate in special events to celebrate the school, such as the yearly “Derby” event, where kindergarteners race with their stick horses and a winning horse is declared. That’s always a big deal for the kids, Kelly said, and they plan to make this year’s even more special.

She said they have been taking photos throughout the year and will put that together in a video they will show the kids within the few last days.

All the events will culminate in the last day, currently scheduled for May 25, when they will celebrate with poppers, buttons, a special production of the school song, photos on the front step and more, all under a skywriter showing the love to Jennie Rogers.

“It’s been a great journey,” Kelly said. “As I think about it, sitting at this desk, we’ve got a fantastic staff, we’ve got great kids and we’ve had a great time here — I have enjoyed my time here.”

There will be an Open House to share memories from Jennie Rogers Elementary School from 5:30-7 p.m. April 20. The event is casual and open to the public.