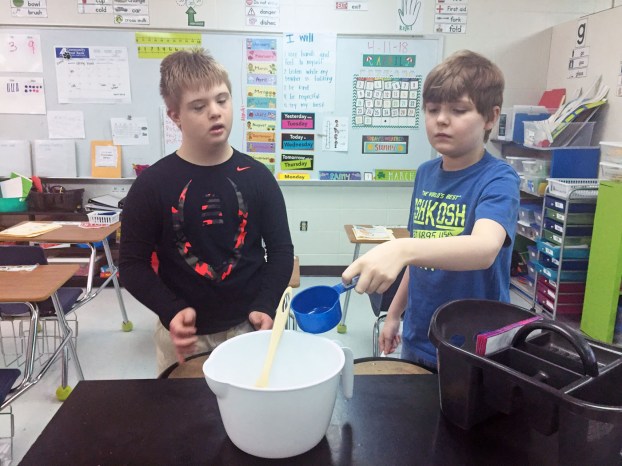 It’s as simple as being able to purchase pots and pans, but for Katie Newton’s students at Bate Middle School, it’s a big deal.

“A lot of our basic kitchen needs I have to bring from home or I’ve had to beg, borrow and steal,” Newton said, before pausing to remind a student to keep working on an activity.

Thanks to a grant from the Danville Schools Foundation, Newton, who teaches the Functional Mental Disability students, will be able to purchase those pots and pans, along with spatulas, dishes, a mixer, mixing bowls, an adaptive cookbook for the students in her classroom and other kitchen-related items.

The grant is one of 18 the Danville Schools Foundation announced they will fund, totaling nearly $7,000. 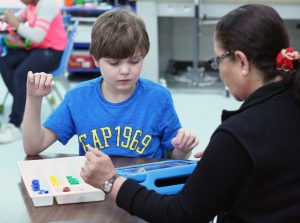 Newton’s students currently use an oven in the school’s cafeteria, but have been told they might get their own soon. Other items she uses for lessons have been donated by fellow educators.

Newton said, “Most of the time when we are cooking, I have big ‘ol bags when I come in. I’ve come in with a blender before, a griddle, you name it … My husband jokes, ‘I know it’s cooking day at school.’”

While working to connect blocks in a shape that matches a picture, Tye Smith, a sixth-grader, said he likes chocolate — the chocolate chip cookies they made in class were his favorite. Another sixth-grader, Bryson Dawson, is counting coins a few seats away, said he liked the sherbet from the floats they made.

Newton said they’ve made pies, cakes, pancakes, French toast and a lot more. She said she likes to expose the students to new things. Newton has asked for an adaptive cookbook, a more visual cooking aid with photos and detailed instructions.

“I love to cook and I would love to instill healthy eating choices,” she said. “That’s the really cool thing in here, we get to teach those skills they need.” The goal with these kids is to teach them to live as independently as possible, she said — every student can now use a washer and dryer, and now they’re working on hanging up and folding clothes.

Sam Pollom, chair of the foundation, said it created an independent committee of reviews to anonymously score all the applications from teachers.

“We’re really excited about the diversity in our grants this year,” he said, explaining the requests ranged from the really big, like a permanent escape room, to the everyday things, like purchasing headphones for a class. “The diversity in grants did stand out this year.”

“Escape the Classroom” was also funded, a project by teacher Susan Wheeler at Jennie Rogers, soon to be teaching at Toliver. Wheeler said the program allows students “to be engaged in their learning while focusing on different standards. A few examples she gave are telling time, counting money, identifying nouns and sequencing events in a story. They all involved teamwork, critical thinking and problem solving.

Speech and drama teacher Darrel Rickmers at Bate will now be able to bring Stephen Pista Nasser, a Jewish playwright, to Danville. He contacted Nasser to get permission for a project he wanted to do where students would turn chapters of Nasser’s book, “My Brother’s Voice” into vignettes. Nasser actually called Rickmers and offered to come personally and reprise his role for them.

“Having this grant funding shows that there is support for what I am doing. It shows support to the students, that even though they may think no one cares, no one is watching out for them, that there are people, lots of them, that care about them and their welfare,” Rickmers said. “As an educator, I can help my students see and understand that education extends beyond the classroom, that it infiltrates all that they do, say and act. That it takes a community as a whole to work together for good.”

“We need for our (Danville) community to take an interest in and support our young people as they look for ways to serve their community in positive ways,” he said.

Money is raised for the Danville School Foundation through donations and two main events: the Dancing with the Danville Stars, which features students, staff and community members dancing in a competition to raise money; and the Bill Pollom 5K. Half of the money from the 5K goes to the Danville Schools Foundation, according to Board Chair Sam Pollom.

The Dancing with the Danville Stars has been set for Nov. 10.

Community is asked to show its love for their park