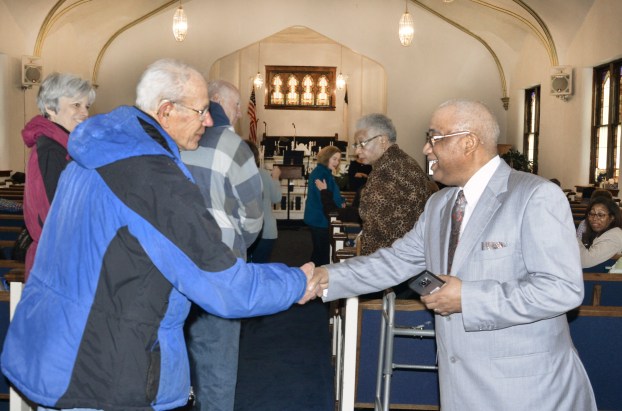 Group marches, joins in praise and song for 50th anniversary of MLK assassination

A large group of different races and ages gathered in Danville to “march forward” in solidarity in commemoration of the 50th anniversary of the assassination of Dr. Martin Luther King Jr.

On Sunday afternoon, the memorial walk — “MLK 50 Years Later: Remembering and Marching Forward” — consisted of the group quietly walking together against the rain and wind to four locations, where speakers talked about King’s life and legacy. 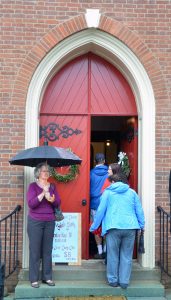 The march began at Trinity Episcopal Church where Pastor James M. Hunn told the near capacity crowd, “Your feet … our feet are needed in this march forward …” and voices are needed to continue the fight against racism and injustice.

Hunn said King could have stayed in his safe place, behind the pulpit. But he chose to face the country and stand up for social justice.

In an emotional tone of voice, Hunn said every choice we make, just like King’s, has consequences, and actions based on these choices can continue improving social injustice.

When the Voices of Praise Choir of First Baptist Church, Second and Walnut began singing a capella songs popular during the civil rights movement in the 1960s, their somber yet booming voices filled the sanctuary with hopeful words for the African-American community.

The group then gathered their rain coats and umbrellas and marched across Main Street to the Boyle County Courthouse, where the second-floor courtroom became packed with marchers.

Michael Ross, who wasn’t yet born when King was assassinated, stood at the podium and read excerpts from the April 3, 1968 “ I’ve been to the Mountaintop” speech — the last one he made before being killed by James Earl Ray.

“Well, I don’t know what will happen now. We’ve got some difficult days ahead. But it doesn’t matter with me now. Because I’ve been to the mountaintop. And I don’t mind. Like any man, I would like to live a long life. Longevity has its place. But I’m not concerned about that now. I just want to do God’s will. And he’s allowed me to go up to the mountain. And I’ve looked over. And I’ve seen the promised land. I may not get there with you. But I want you to know tonight, that we, as a people will get to the promised land. And I’m happy, tonight. I’m not worried about anything. I’m not fearing any man. Mine eyes have seen the glory of the coming of the Lord.”

Marchers quietly walk to Centerpoint Church on the third leg of the remembrance walk. (Photo by Robin Hart)

Following a roaring standing ovation for Ross, the group once again marched downstairs, out the doors and down Main Street to Centerpoint Church on North Third Street in the Chase Bank building. A long line of umbrella-toting people climbed three flights of stairs (some chose the elevator) into a dark, theater-looking space. When Michael Hughes, a local African-American historian, took the stage, a large photo of King was projected onto a screen above Hughes’ head. He asked if any audience members attended the 1964 civil rights movement in Frankfort, and several people stood up. Hughes attended that rally, too.

He recalled the movement had come to Kentucky. And with changes, there also came challenges. He recalled there was a fear that something terrible could happen to King because just a few months earlier, President John F. Kennedy had been assassinated. He said the feeling of the day was if a president could be killed, then King could also be assassinated, too.

When news hit Danville High School where Hughes was a student, he said people gathered in the lobby. Some were crying, some were upset and angry. Others were stunned with disbelief. He said some people wanted to violently protest, but they were convinced not to because it would have been against King’s teachings. 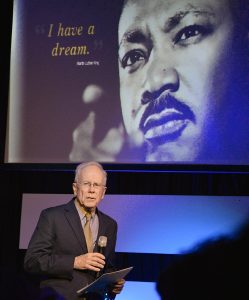 Dr. Eric Mount talks to the crowd about the background behind MLK’s “Letter from Birmingham Jail.” (Photo by Robin Hart)

Several days later, Hughes said when tensions subsided, the Danville community stayed calm. He remembered watching King’s funeral on TV. And to this day, Hughes said he honors King’s life, legacy and sacrifice with these three words, “Still we rise.”

Dr. Eric Mount discussed the background of King’s “Letter from Birmingham Jail.” According to Mount, King said Birmingham in 1963 “was probably the most segregated city in the United States.” The “Letter from a Birmingham jail” was written after King and more than 50 other protesters were arrested for demonstrating on Good Friday and had been denied a request to have a march.

After the lesson about the importance of this work, the group took to the streets and walked to St. James A.M.E. Church on West Walnut Street. 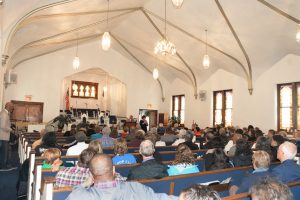 Here, Artie Atkins said, “Behind every great man there is a great woman.” She shared events in Coretta Scott King’s life as she worked beside her husband and evolved into a distinguished activist in her own right. She later founded the Martin Luther King Jr. Center for Nonviolent Social Change and successfully lobbied for his birthday to be a national holiday.

Alethea Price stood and read from a few written works by Mrs. King’s including, “The woman power of this nation can be the power which makes us whole and heals the rotten community, now so shattered by war and poverty and racism. I have great faith in the power of women who will dedicate themselves wholeheartedly to the tasks of remaking our society.”

Throughout the entire afternoon, J.H. Atkins, who spearheaded the event, wore a sign that read, “I Am A Man.” He proudly wore it in the rain, marching down Main, Third and Second streets and finally down West Walnut. He was seen inside every venue, greeting people and handing out fliers listing the city’s upcoming human relations events and resource guide. 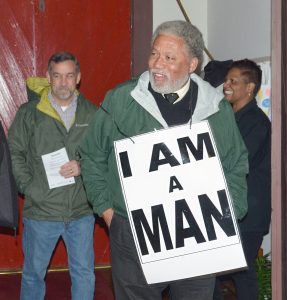 J.H. Atkins enters Trinity Episcopal Church wearing an iconic “I Am A Man” sign was worn in Memphis by sanitation workers who had been on strike 68 days. This was also the last protest that King joined. (Photo by Robin Hart)

After the memorial walk, Atkins said several adults and children asked him about the significance of his sign. He said he felt good to teach them that on April 4, 1968, King was in Memphis to lead a nonviolent march of about 1,500 sanitation workers who had been on strike for 68 days. They carried the same sign, “I Am A Man.” This was the last protest King attended.

Atkins said King was there to help them gain support for better wages. Atkins said Memphis sanitation workers were working 40-50 hours a week, lifting 50-pound garbage cans and still qualified to be on Welfare.

He said it was impressive to read The Advocate-Messenger’s history files where, 50 years ago, Danville declared Martin Luther King Jr. Day and churches had memorials during their regular service in honor of King. He said he felt good that “little old Danville” did so much to honor King  and it’s good the town is continuing to keep his memory alive.

“It shows what a great community we live in,” Atkins said.

Marchers make their way through the rain Sunday.

J.H. Atkins enters Trinity Episcopal Church wearing an iconic “I Am A Man” sign was worn in Memphis by sanitation workers who had been on strike 68 days. This was also the last protest that King joined. (Photo by Robin Hart)

J.H. Atkins stands at the rear of the courtroom.

The Boyle County Courthouse court room is filled to capacity as they wait for Michael Ross to read excerpts from MLK”s famous Mountain Top speech. (Photo by Robin Hart)

Michael Ross reads from Dr. Martin Luther King’s Mountain Top speech, which he presented the day before his assassination in 1968. (Photo by Robin Hart)

Dr. Eric Mount talks to the crowd about the background behind MLK’s “Letter from Birmingham Jail.” (Photo by Robin Hart)

Marchers quietly walk to Centerpoint Church on the third leg of the remembrance walk. (Photo by Robin Hart)
You Might Like

One full-time position has been cut from the Boyle County Detention Center’s budget for the 2018-2019 fiscal year. This comes... read more