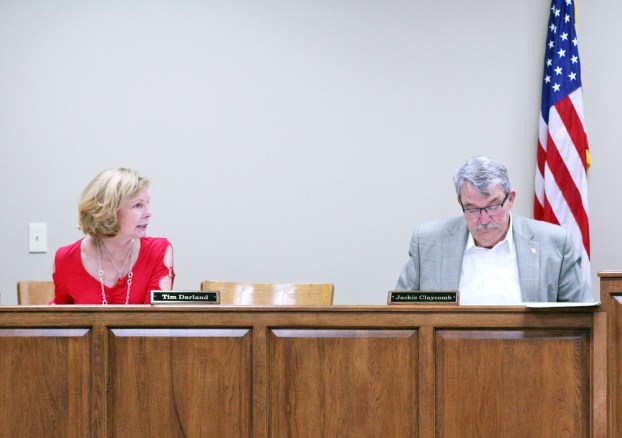 One full-time position has been cut from the Boyle County Detention Center’s budget for the 2018-2019 fiscal year.

This comes in light of cuts anticipated across the board, Boyle County Judge-Executive Harold McKinney said during a meeting of the Boyle-Mercer Joint Jail Committee Friday.

“We are in the position of making difficult decisions,” said McKinney.

Harmon presented the committee with a letter that he wrote, stating that “a reduction of staff will require a significant increase in overtime costs.”

The three-page letter said that treatment programs for inmates was most requested during town hall meetings held by Brandstetter Carroll. A deputy must be present to supervise the programs. Those types of events have to be cancelled most often because there aren’t enough deputies, Harmon’s letter states.

“The Boyle County Detention Center has a legal and moral obligation to ensure the safety and security of staff, inmates, visitors, general public and the facility. Decreasing the number of deputies will be detrimental to accomplishing this obligation,” Harmon said, reading from his letter.

Harmon also said decreasing the number of deputies increases the chance that a deputy or inmate could be harmed. He said the Boyle County Detention Center chose to delete $32,000 from the budget for a “much-needed” transport vehicle in an attempt to keep 40 full-time deputies.

“At this time, our staffing is stretched so thin that we should be adding staff rather than discussing staff reduction,” he said.

McKinney said he anticipated that there would be a reduction of one position — a transport officer — because the duties of that job are going to be taken over by the Boyle County Sheriff’s Office.

Committee member and Boyle County Attorney Lynne Dean said she, too, expected that to happen.

“I appreciate your letter and I don’t know firsthand, obviously, all the challenges that you and your staff face on a daily basis. But I am aware it is a very challenging job and I have the pleasure of working with your staff,” she said. “Your letter is well taken by me and I know the rest of the committee.”

She said she “did anticipate some significant cost-savings” with the transport officer being removed from the jail’s budget.

“I hate that there has to be a discussion about losing a position,” she said.

“He’s had more duties added to him as the field training officer. We’ve eliminated 25 percent of his responsibilities, but we’re going to eliminate 100 percent of his job. Not his job, but a job,” Holderman said, expressing frustration about the decision.

If the employee remained, according to another letter from Harmon to the committee, he would still be transporting state and county inmates to medical appointments; taking state inmates to the nearest bus stop upon their release and to the Roederer Correction Complex; overseeing cell searches; and more. The employee would also be training new officers and determine when they are ready to take their positions.

Boyle County Treasurer Mary Conley said finances are tight across the board.

“We’ve finished the Boyle County Fiscal Court’s budget and, I’m going to say out loud, it’s not where Boyle County Fiscal Court needs to be,” Conley said. “I don’t know if we can make enough tweaks without all the departments’ participating in managing their expenses in accordance with their revenues to be responsible and to provide services, but we all have to be mindful of the revenue that we have coming in.”

She said the retirement and health insurance costs that come with having 40 full-time employees is what makes it too costly.

The discussion to cut a full-time employee came after Conley presented the budget to the committee.

Conley said Boyle and Mercer counties were each having to pay in additional funds each month to pay the jail’s bills, covering for lapses in funding from the state. She explained while presenting the March budget that they are still dealing with delays with the monthly state payments; since January’s payment, which came late, the payments have been a month behind, due to a new employee at the state level.

“We’re hoping that, in the next couple of months, we’ll be able to get that caught up. Before the end of the fiscal year, is what I’m hoping,” she said. “That constitutes about $90,000 of revenue.”

She said that the jail was also averaging about $157,000 a month in shortfalls, which Boyle and Mercer counties are having to cover from their general funds.

Conley said she also calculated the detention center’s profit and loss from year to year, which shows that the budget is increasing, she said.

Comparing the last three years, Conley said, the jail’s expenses are increasing annually by an average of $183,850 more than revenue.

McKinney said the figures Conley was pointing out had increased over $1 million since he had started 10 years ago.

In other business, the committee heard from Eric M. Chambers, public safety market leader with Brandstetter Carroll, a consulting firm retained by the committee to produce an “inmate confinement and rehabilitation study.”

Chambers said Kentucky’s current pension issues has impacted the progress being made on the study.

“The (Administrative Office of the Courts) has seen a significant amount of people who have left in retirement and they’re trying to fill slots at this time,” Chambers said. “We’re getting the data slowly.”

Brandstetter Carroll’s study is intended to analyze Boyle and Mercer counties’ criminal justice systems and make recommendations for improvements that could reduce the jail population and improve rehabilitation for inmates, among other things.

It’s as simple as being able to purchase pots and pans, but for Katie Newton’s students at Bate Middle School,... read more