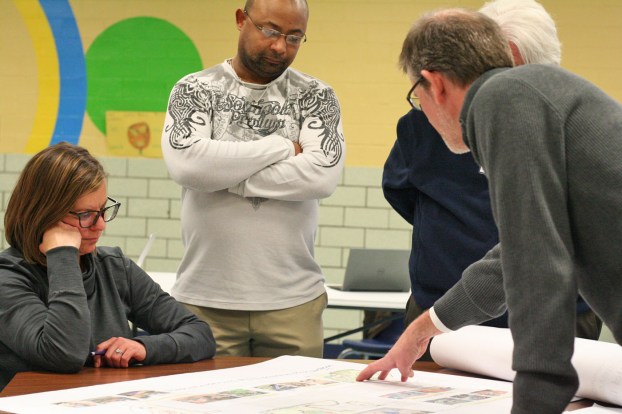 (Photo by Kendra Peek) Steven Ward with Studio Kremer Architects answers questions and shows the board the renderings for the Hogsett renovations during Monday's board meeting.

Danville Independent Schools will maintain the last day of school as May 25.

The board voted Monday night to add April 27 as an instructional day. It was initially scheduled as a professional development day for teachers.

The professional development for teachers will be moved to June 1, moving the staff closing day to June 4.

“Hopefully, that’s it. We’re out of options,” said Ed McKinney, director of pupil personnel in the district. “Coming back for one day after Memorial Day, it’ll look good on paper, but the effectiveness of that instructionally — the best option is to go (April) 27.”

The changes come after the school was closed on April 13 so teachers could go to Frankfort. That was the first closure day due to teachers calling in; the district was also closed on Feb. 9 due to student illness and Jan. 12, 16-18 and March 12 due to severe weather. The other days have already been built back into the calendar.

Graduation has been scheduled for 8 p.m. May 25 at Norton Center for the Arts.

Board members also learned that the renovation plans at Hogsett Elementary School, soon to be Hogsett Primary School, had to be changed slightly.

“When the structural engineer got into his calculations of what the existing building could support, he found some problems,” said Steven Ward with Studio Kremer Architects.

He said some of the existing walls wouldn’t support the additional loading that new construction would put on them.

“The code it was built to in 1958 is very different than what we ask of it now,” Ward said.

They had to do some redesign, bringing the additions lower than originally plan. Ward said they accommodated that by extending canopies farther and a few other things.

“A big part of the redesign was that we didn’t want to affect cost,” he said. “Some of the things the structural engineer would have had to do to the existing building in order to accommodate the design would have been really intrusive. It would have meant taking apart some of the roof structure and the wall structure to make it work. The redesign (of the plan) kept us in our budget.”

Students will not be in the building during the renovation project, but will be housed in the current Jennie Rogers Elementary School.

Walls will be moved in the end of the hall closest to Waveland Avenue, because it will be home to the district’s kindergarten classrooms.

He showed board members the updated plans, which they approved during the meeting, after asking questions.

When the Battle of Perryville took place in October of 1862, local landowners and farmers had their rolling hills covered... read more