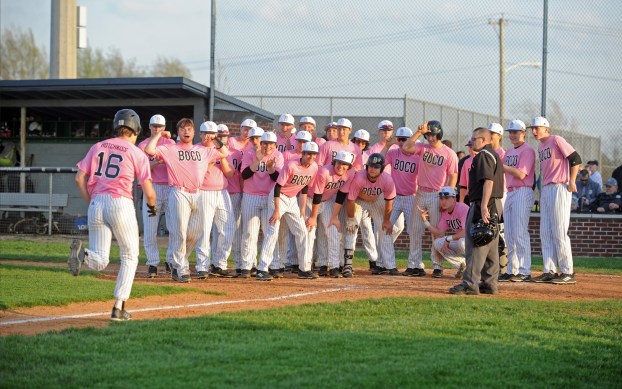 Boyle County’s bats came to life in game two of its series against Danville.
The Rebels needed just five innings to beat Danville 15-5, securing the No. 1 seed in the 45th District tournament in the process.

“Last night we had to scrape a few across, it was good to see the bats come alive tonight,” Boyle County head coach Kyle Wynn said. “The biggest thing was we put the ball in play. We put it in play, there were no easy outs and we let the offense work. That’s what we did. Our patience at the plate, we settled in and that helped the next guy settle in.”

Boyle (9-1, 4-0) jumped out to a 5-0 lead in the first inning and starting pitcher Tristen Helton recorded his first six outs all by strikeout as the Rebels cruised through two innings.

The Admirals were hit with adversity before taking the field — freshman Christian Howe was the starter, but was injured in warm ups.

“I wasn’t disappointed in our loss or anything, I was disappointed with how we reacted to adversity,” Danville head coach Paul Morse said. “It started before the game with the injury to Christian Howe there. It was kind of deja vu from this time last year with Brian Baxa. This field, this mound might be jinxed, it looks like it could be the same injury. But we’ll find out tomorrow. It hurts when one of your leading hitters, one of your better arms, goes out.”

Baxa had to have Tommy John surgery after tearing his UCL during the game against Boyle County last year.

Without Howe, the Admirals turned to Jacob Crank on the mound. Crank also threw during Tuesday’s game and finished with one inning against the Rebels on Wednesday.

The Rebels certainly took advantage of uncertainty on the Danville mound: Boyle had 13 hits on the day and every starter recorded a hit or RBI.

“I think from top to bottom, guys were doing different things,” Wynn said. “There wasn’t anyone struggling, we didn’t have to pinch-hit anyone. Everybody was doing one thing or another: Getting a base hit, working the count to get on base, or just putting the ball in play and hustling down the line and making things happen.”

Danville would bring three runs across in the third inning, highlighted by a two-RBI triple by Jacob Crank. But the Rebels were quick to respond, scoring seven runs in the bottom half of the inning. Alex Sergent had a bases-clearing triple of his own in the third, plating three runs.

Grant Hotchkiss’ solo home run was the only score in the fourth inning, making the score 14-3 after four.

Danville wouldn’t go down in the top of the fifth as Ethan Wood and Cayden Shaver each knocked in a run to make the score 14-5 entering the bottom half of the inning.

“We had some good at bats. The first inning, our at-bats were horrible,” Morse said. “We were chasing balls out of the zone and we struck out all three times. That was frustrating there. But I think we had much better at bats as the game went on. They got a little more focused, started laying off of the high pitch. It was good to score runs that inning and I liked how we scored runs there to make it go to the bottom of the fifth. They weren’t giving up by any means. There was fight left in them.”

Karson Thompson took over for Helton after the third inning and gave up two runs (one earned) across the final two frames while striking out four.

Boyle would plate two more runs in the bottom of the fifth inning — capped by Kevin Hatfield sliding home on a wild pitch — to end the game.

The win gives Boyle the top seed in the district at 4-0. Danville (2-2) and Garrard County (2-2) can match the Rebels (if Lincoln County were to sweep Boyle next week), but Boyle has the tiebreaker over both teams after sweeping them already.

“We had to get this one, it was a big one and it’s nice to be in the driver’s seat going into the last weekend,” Wynn said. “You don’t want to have someone else do something in the other series. We want our guys to be able to control what we can control, and that’s where we are. I think it helps our guys play a little loose and you don’t have to hope, wish something else to happen.”

Danville and Garrard will be the 2-seed and 3-seed, and next week’s series will determine who gets to have the higher seed.

“That’ll be good. CJ (Lynn) is one of my boys from way back, played for me and coached with us before he went to Garrard,” Morse said. “Those games are always fun and he’ll have them ready to play and we’ll come out ready to go as well.”

Sam Tiller filled the strike zone and Boyle County’s offense chipped away at Danville in a textbook 5-1 victory on... read more