KIWANIS OF DANVILLE
Press release
Dr. Jeffrey Klosterman, optometrist, presented interesting and helpful information to the Kiwanis Club of Danville on April 12.
About five years ago, Klosterman began his road into the revolutionary field of orthokeratology — which is the temporary reshaping of the cornea with specially made rigid contact lenses, in order to correct myopia. He likens it to braces for the eyes, in that it corrects corneal curvature, thereby cutting down on nearsightedness. It involves wearing lenses, which are both similar to — and very different from — contact lenses, only at night, assisting the eyes to move away from 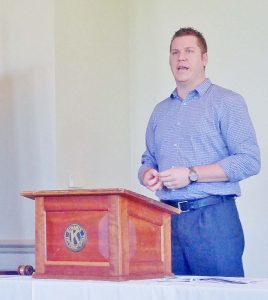 nearsightedness. Orthokeratology can help out folks who have either only worn glasses or contacts — or for individuals who would like Lasik, but are unable to have it done.

Klosterman told the group that research is certainly showing that digital devices are causing more nearsightedness now than ever. He shared with us that there is a 43-percent reduction in nearsightedness for children who experience an increase of one and a-half hours’ time outside per day versus being inside with video games, etc.
Also, about two years ago, Klosterman began the business of mEYEnd (pronounce like “mind”), which came about through connections he had developed in his work in orthokeratology. mEYEnd specializes in visual and sensory skill training, which he said was the next natural phase in athletic training and performance. Klosterman sees this as a critical link between the physical and mental aspects of elite sports performance and rehabilitation. More information can be found by contacting meyendperformance@gmail.com or visiting meyend.com.
And then, as if he wasn’t busy enough, Klosterman then began another company about three months ago called Virtus. This came about through the inspiration from some other contacts he had made, including former UK player, and current NBA player, Darius Miller. Because of the reputation for integrity and follow-through that Klosterman had developed, an opportunity was seen to meet the needs of those in the sports industry that had not been met at that point for cutting edge tech and training for serious athletes. This project goes beyond just the optical and the training, and deals with brand design, project management, and professional athlete services. More information can be found by contacting info@thevirtusbrand.com.
To learn more about Kiwanis Club of Danville, email nicholsphilip3@gmail.com or robertc@stuartpowell.com.
You Might Like