By DAVE FAIRCHILD
Danville Rotary
Fresh from Lincoln Center where he performed the Easter oratorio “Thy Will Be Done,” Centre College’s artist-in-residence operatic tenor, Gregory Turay, sang selections from his repertoire for Rotary members and their guests on April 13. Turay, who earned his doctorate since his last visit, was accompanied by Dr. Tedrin Blair Lindsay. Turay’s performance drew heavily from Andrew Lloyd Webber’s compositions, including “Phantom of the Opera,” “Joseph and the Amazing Technicolor Dream Coat,” :Aspects of Love,” and “Love Never Dies.”
Turay was appointed Alltech Artist-in-Residence at Centre College in September of 2016. As a world-renowned American tenor and Metropolitan Opera veteran, he has shared his talent and knowledge with students at Centre by giving recitals, hosting vocal workshops and giving private voice lessons.
Recently deceased founder and President of Alltech, Dr. Pearse Lyons, a native of Ireland, brought many talented musicians to the University of Kentucky and Centre. In addition to Turay at Centre, Pearse and his wife, Deirdre, also sponsored the accompanist, Lindsay. So it was not surprising that both men chose to recognize their valued relationships with Lyons in their performance.
Turay had just returned from Dublin, Ireland, where he attended a mass for Lyons a couple of weeks ago. In honor of their friend and benefactor, the pair performed “Bring Him Home,” a song from the musical “Les Misérables,” about a young man from Northern Ireland singing a song to his severely disabled brother. Turay noted that the song was a favorite of Lyons. 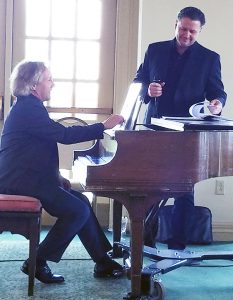 Lindsay, pianist and musicologist, was raised in Rome, Italy and has been a professional accompanist since the age of 10. He performs well over 100 concerts annually, many of them with Turay. He serves on the opera faculty at the University of Kentucky as vocal coach and musical director. In 2007, he played in Carnegie Hall with Arlo Guthrie and the U.K. Symphony, in 2009 he performed in the celebration Our Lincoln at the Kennedy Center, and in 2010, he played in both the opening and closing ceremonies of the Alltech FEI World Equestrian Games. In December 2010, he participated as vocal director and orchestral pianist for the world premiere of Pasatieri’s “God Bless Us Every One” at Dicapo Opera in New York City. Lindsay’s holds a Ph.D. from U.K.; an M.A. Magna cum laude from Asbury College; B.A. in Music Performance (piano), from the Royal Schools of Music in London, England.
Lindsay performed a creation of his, titled “Happy Birthday in Nine Variations” in honor of all those in the audience with birthdays during the year. The piece included variations from Mozart, Moline, Johann Strauss II, Rag Time, Tango and more.
Later in the program, Lindsay played a medley of Stephen Foster’s “Oh Susannah!/Swanee River/My Old Kentucky Home/De Camptown Races.”