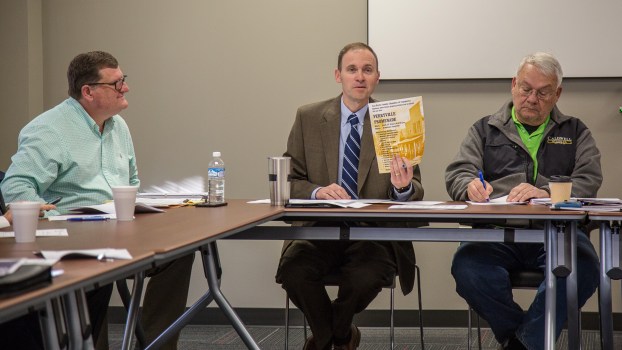 The project inquiries are documented in the EDP’s quarterly “project funnel report.” The report details how many prospective businesses asked about locating or expanding in Boyle County; how many “qualified” by finding a site or other information that made Boyle a viable option; which of those have moved on to “due diligence” or planning; and how many have gone on to announce their project or open a business.

Of those 30 inquiries, nine have since been lost to “attrition” and are considered no longer active. Reasons for attrition included:

• four projects had requirements for building space and location that Boyle County could not meet;

• three projects either stopped responding or decided not to pursue further; and

• one project decided to look at locations in a different state.

One project has already proceeded all the way to announcing and opening for business: Love Your Mother Lawns LLC launched on March 28, about two weeks after an initial inquiry was made with the EDP. The business has an initial investment of less than $100,000, according to the report.

Six of the projects have moved through the “qualified” stage to the “due diligence” phase, including:

• Project Apple, a new industry considering an investment of between $10 million and $25 million that would create an estimated 25-49 jobs in Danville;

• an investor inquiry about a new commercial business in Danville;

• the Child Daycare Center 2 project, which would be a new commercial business in Junction City.

Child care solutions are big focus for Boyle County right now, due to the pending closure of A Children’s Place — a child care business near the Boyle County Industrial Park that cares for 130 children.

Goode said six of the 30 inquiries were about new child care facilities or expansion of existing facilities.

Dr. Patten Mahler, assistant professor of economics at Centre College, told members of the EDP board Wednesday that “(EDP President) Jody (Lassiter) and Hal are working hard, exploring every kind of person who wants to expand their child care or come in and bring in a new one.”

Mahler is spearheading a volunteer task force with Tom Poland, looking into solutions for child care in the community.

“I’m a labor economist. I’m framing this as a workforce issue,” she said. “(In the) short run, trying to make sure we can keep these families in town and able to work; and in the long run thinking about how the child care is going to affect school readiness and the workforce …

“We’re interested in bringing stakeholders together in the community to try to see how we can kind of improve child care capacity and identify models from other communities to borrow and kind of paste into ours.”

Five projects on the funnel report are explicitly labeled as being about child care centers. Of those, one has been lost to attrition — Child Daycare Center 1. It was a potential new commercial business in Danville that proceeded to the “due diligence phase,” but now the “prospect decided not to pursue (the) business opportunity,” according to the report.

The Childcare Daycare Center 4 project would be a new commercial business in Danville; it has moved past the inquiry phase to “qualified.”

The Childcare Daycare Center 5 project would be an expansion of an existing commercial business in Perryville; it is also in the “qualified” phase.

Literally tons of recyclable materials pass through the doors of the Boyle County Recycling Center on the Danville bypass. Trucks... read more