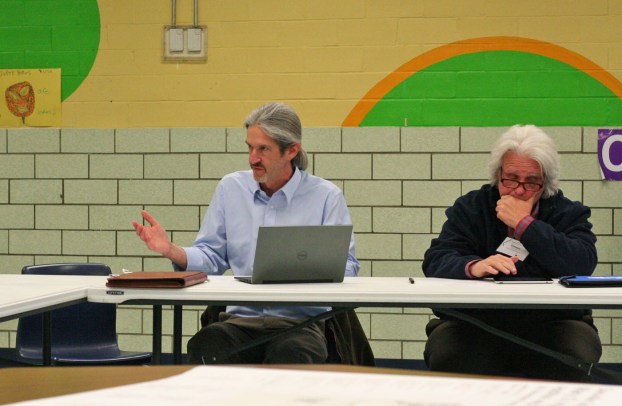 Despite passage of House Bill 200, districts wait for politics to unfold

Schools are beginning to relax, as far as the budget goes, after House Bill 200, the budget bill, was passed last week, overriding a veto from Governor Matt Bevin.

“Much of what was originally cut in education was restored,” said Danville Superintendent Keith Look to the board on Monday.

Board member Steven Becker expressed concerns. Becker said he had been advised that the districts didn’t need to commit to any massive budget changes yet.

“We don’t know where all of that’s going to fall,” he said, citing the pension bill that’s facing litigation, the potential for a special session and the uncertainty of the governor’s next step.

On Friday, Look said there are some ways in which the budget can still change.

“That reality remains,” he said. But it’s pretty certain, he said, that the budget is set.

Look said, “For education, we did OK. It’s not a huge amount of increase, but it’s the first increase we’ve had in many years.”

David Morris, finance officer for the Boyle County Schools, said the bills passed did restore a lot of funding that had been on the chopping block in the original budget bill proposed by Bevin.

For example, compared to current numbers, Morris said the new budget offers a slight increase in funding to students with disabilities and a small decrease in transportation, but not nearly as drastic as what had been proposed; transportation was facing drastic cuts in the original proposed bill.

One thing that Look said he was happy to see was the funding of Family Resource and Youth Services Centers, which had been facing proposed cuts, which will ensure they are still able to meet the needs of the kids most served by that program, often the  districts’ neediest students.

Districts did lose School Facilities Construction Commission funding, but saw an increase in their nickel tax equalization, Morris said. “That increases our bonding potential,” he said. That money can only be used toward building projects. That, he said, is big.

Some of the cuts districts were served with included professional development and the Kentucky Teacher Internship Program (KTIP), which pairs new teachers with experienced teachers to learn from while in their first few years.

“That will mostly come out of our general fund,” Morris said. For Boyle County, that meant the district received about $100,000 for those continuing education requirements for teachers.

“That’s gone. We’ll have to make that up,” Morris said.

Look said the cuts to KTIP are a huge concern for him.“That is a big support to new teachers.” However, on Monday, the Math and Read to Achieve grants were given funding; Danville receives those grants. Preschool programs, he said, were also given funding; initially, that was on the chopping block. He said education in general, came out much better than what was feared.

Look said Friday there are still increases in what districts will have to fund.

“Why that matters, in particular, a lot of times, folks forget that KERA in 1989 started as a financial lawsuit based on disparity in funding for kids,” Look said, referring to the Kentucky Education Reform Act.

KERA, he said, came about because the education system in Kentucky was declared unconstitutional because of that disparity of funding. The act established site-based decision-making councils in schools, established the amount of money that was to be spent on each student and established testing standards across the districts.

“One of the fears I have overall about the budget, even though our base SEEK funding got a bump, other things got pushed down. We have to be very careful that that doesn’t recreate the conditions — we don’t want to repeat history,” Look said.

He said it could force districts to raise their tax rates to the four percent revenue increase, the maximum amount mandated by law.

“Whereas in Danville, where we actually got a tax break, that’s not going to happen anymore. We’ve got too big of holes we’re going to have to fill if we want to provide support for new teachers, textbooks, certain professional development opportunities,” Look said. “We’ve got some pretty heavy lifting to pick up.”

What the district has to pay into the County Employees Retirement System, said Dean, on Monday, will increase by 21.48 percent by the 2018-2019 school year. It will continue increasing after that.

Overall, Morris called the budget “solid” for the Boyle County district. “It allows us to maintain a lot of the programs that we currently have.”

Superintendent Mike LaFavers said, “as you can tell, it’s all pretty new.”

Morris said they are still getting all of the numbers counted, just to see how it will impact Boyle County. “We feel like we’re really going to be able to accommodate (our children),” he said.

The district is better off than some, LaFavers said, because they had made efforts to make sure every kid in grades six through 12 had access to a Google Chromebook to use. That enables the district to spend less on textbooks.

When asked if he was concerned about the district, Morris said, “You’re always concerned.”

“As finance director, maybe it’s just me that always concerned. I was concerned six years ago. I’m concerned today. We’re trying not to be reactionary and take in all the contingencies,” he said.

LaFavers said he thought one thing that would still be a concern will be the new pension law, which will put new teachers on a 401K with no social security. Districts, he said, will have to find other ways to stay competitive, especially with the shrinking pool of teachers coming out.

“It’s already happening — the college and universities are graduating fewer educators,” he said. “That is the number one thing that has probably come out of all of this.”

The last day to register to vote in the May 22 primary election is Monday. Lee Miller, Boyle County Clerk’s... read more