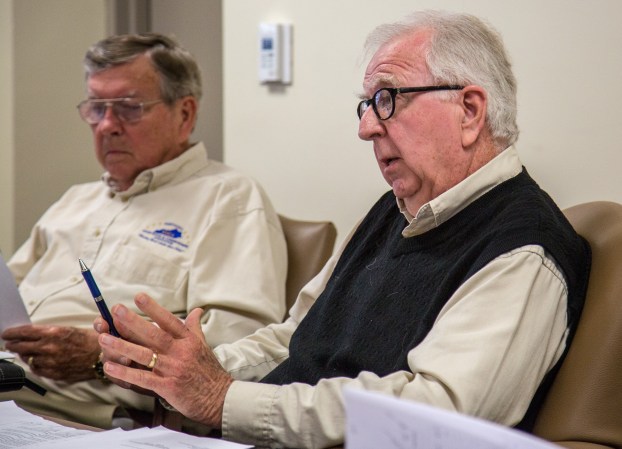 Boyle County magistrates voted Tuesday to retain a full-time position at the Boyle County Detention Center, going against the recommendation of the Boyle-Mercer Joint Jail Committee.

Part of the transport officer’s job involves transporting Boyle County inmates to court appearances. The position is paid for through the Joint Jail budget, which Boyle and Mercer counties contribute to, but Mercer County pays separately for its own inmate transports. That led to complaints from Mercer County that Mercer was subsidizing Boyle’s transportation costs.

Elimination of the transport officer position was first brought up publicly at the March Joint Jail Committee meeting. The proposal is to use the Boyle County Sheriff’s Office to transport inmates for court instead. At that time, jail officials objected to the idea, saying the transport officer does many other duties and it would harm the jail’s ability to operate safely without him.

“It’s really going to put us in a dangerous spot if we go backwards on the number of employees,” Chief Deputy Jailer Brian Wofford said at the time.

Boyle County Treasurer Mary Conley said eliminating the position was proposed “in the spirit of … trying to be good neighbors.”

“I just thought that maybe we could try to tighten our belts,” she said at the time.

On April 13, the Joint Jail Committee voted to recommend cutting the position, over further objections from jail officials. 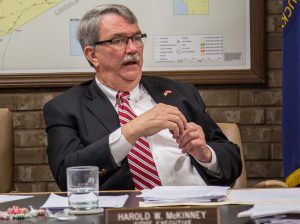 Boyle County Judge-Executive Harold McKinney made a motion Tuesday to approve a compensation order that would have cut one full-time position at the Boyle County Detention Center, but the motion died for lack of a second.

On Tuesday, Boyle County Judge-Executive Harold McKinney made a motion to approve the recommended 39 positions as part of a larger approval of compensation rates for county officials.

But McKinney’s motion died for lack of a second, as Magistrate Jack Hendricks spoke up against the cut.

“From what the jailer tells us and the report that we’ve got here, his activities as transport officer is only like 25 to 30 percent of his day, and they have a full schedule for this guy when he goes back to the jail,” Hendricks said. “And of all places that I don’t think we need to be cutting right now, it’s the jail. We’ve got more problems out there — we’ve got a powder keg sitting out there all the time and to go in here and say we’re going to cut people to save a few dollars is not … in our best interest.”

Hendricks said if the position is cut, Jailer Barry Harmon has said it will require overtime from the existing positions to cover the leftover duties.

“So we’ve saved nothing, in my opinion,” he said.

Magistrate John Caywood said when the county’s Sheriff Committee met earlier Tuesday morning, it voted to recommend against having the sheriff take over transport duties.

Sheriff Derek Robbins spoke to that decision, telling the fiscal court he wants to be a “team player” but would prefer not to have the added transport responsibilities. The sheriff’s office already has to deal with dozens of transport assignments and handles out-of-county people who are dropped at the hospital in Danville by other law enforcement agencies, he said.

“Ultimately, whatever resolution you guys come up with, I’m going to do what I can to help,” Robbins said. “But my personal preference is I don’t want to have anything to do with transporting prisoners from the jail to here.”

Robbins said he has offered to take responsibility for transported inmates once they arrive at the courthouse, freeing up time for the transport officer who would otherwise be sitting at the courthouse until it was time to take inmates back to the jail.

The fiscal court ultimately voted unanimously — including McKinney — in favor of a motion by Caywood to not have the sheriff make court transports. The court also approved the compensation order including the restoration of the transport officer position.

Conley said later in the meeting that retaining the position would have a “$60,000 to $65,000” impact on the Joint Jail budget. McKinney said after the meeting that while specifics have not been worked out, his recommendation would likely be for Boyle County to pay for a portion of the transport officer’s salary equal to the time he spends transporting Boyle inmates, so that cost would no longer be on the Joint Jail budget.

The fiscal court also gave initial approval to a $5 million proposed Joint Jail budget, though officials cautioned several changes still needed to be made, including updating the cost of keeping the transport officer.

The budget anticipates almost $1.75 million in revenues from outside Boyle and Mercer counties’ general funds, a decrease of almost $70,000 from the current fiscal year’s budget. That’s largely because of an anticipated loss of local corrections assistance money — funds paid to counties by the state to help with jail costs.

How deep the cuts to corrections assistance funding will be is still up in the air. Conley said after the meeting it won’t have much of an impact on the budget regardless, because the counties have been sweeping most of those funds into a savings account anyway.

The compensation order approved by the Boyle County Fiscal Court Tuesday not only maintains 40 full-time positions at the jail, it also sets the compensation levels for several county officials. The annual salaries for the positions are listed below:

Boyle County Judge-Executive Harold McKinney said the coroner’s salary was increased from it’s current level of $12,000 after county officials studied other counties’ pay rates. “I think that comports with other counties that have a comparable number of cases,” he said.