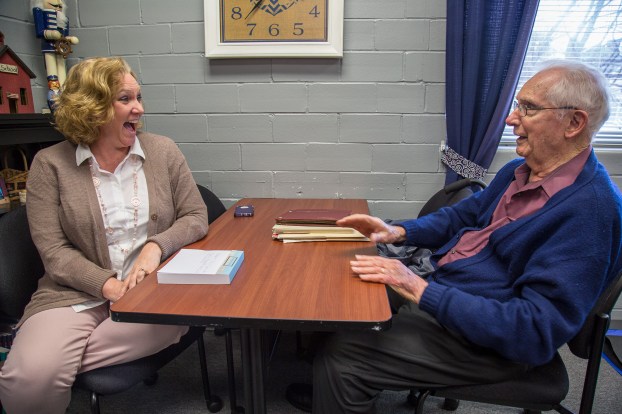 On Monday afternoon, these first and the last principals for Jennie Rogers met at the school to fill in the blanks for each other on the school’s past and present.

Adams and Kelly sat down in Kelly’s office — Adams’ old office — and Adams brought along a file folder crammed with memorabilia.

Adams may be 93, but his memory is sharp as a tack. 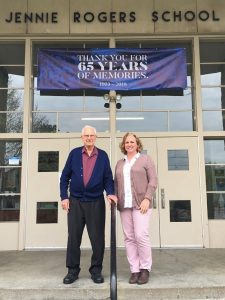 Photo contributed
Earl Adams, left, and Robin Kelly stand in front of Jennie Rogers Elementary School on Monday. Adams, the first principal of the school, visited for around half an hour with Kelly, the current principal, just about a month before the school will close for the last time.

He attended EKU after serving in the Navy during World War II, when he trained officers to use radar from a base in Hawaii; he married his wife in 1946 and will celebrate 72 years with her in June. After earning his master’s in education in 1949, he began looking for a job.

“I remember one county, I asked what their salary schedule was — $68 a month,” Adams said, earning a surprised laugh from Kelly. “I came to Danville for $250 a month. I went to work at (Broadway Elementary School) … after I taught three years at Broadway, Ms. Jennie (Rogers) retired in ’52.”

Rogers’ retirement came after a structure fire that completely destroyed Broadway Elementary in 1951.

“We were on Christmas break when (Broadway) burned. Ms. Jennie and I stood across the street and watched it burn,” Adams said.

According to news archives, the fire occurred in January 1951; one firefighter was injured battling the blaze. In the aftermath, the school district built Jennie Rogers Elementary, and Adams was named its first principal.

“I had a good crew of people. I had some teachers who had taught more years than I was old when I moved in as their principal,” he said. “So I learned from them, really. And they were super-nice to me.” 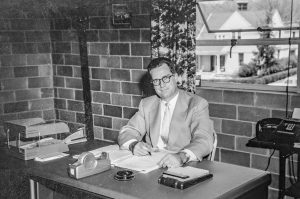 Photo contributed
Earl Adams sits behind his desk in the principal’s office at Jennie Rogers Elementary School. Adams was the school’s first principal; he began in 1952 and held the position for four and a half years.

Adams actually had to serve as principal while the school building was still under construction and many of the classrooms were scattered around the city, in the high school, churches and elsewhere.

“I became principal before this building was finished at all, so I would rotate all over town to see my various (classes),” he said. “It was a relief when we got to move part of them into this building.”

Adams said one wing of Jennie Rogers was opened in 1952 before the rest of the school was completed in 1953. Kelly said that explains how the school opened in 1952, even though she has an old “grand opening” program for the school dated 1953.

Adams still has photo albums of kids who attended Jennie Rogers while he was principal; many of those kids are likely grandparents of children who attend the school under Kelly today, he said. 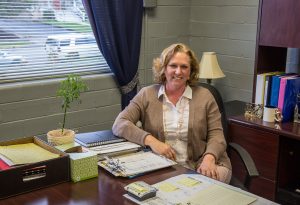 Ben Kleppinger/ben.kleppinger@amnews.com
Robin Kelly sits behind her desk in the principal’s office, the same office that Earl Adams used.

Jennie Rogers used to house sixth-, seventh- and eighth-graders, as well. Given the Danville district is preparing a large-scale reorganization of its schools that involves the closure of Jennie Rogers, Kelly was curious about how the Danville community handled the transition when those older students were moved out of Jennie Rogers.

“This reconfiguration of moving our schools around — it’s a big deal. A lot of people are just tore up about it and a lot of people have anxiety,” she said.

“There wasn’t that much (anxiety) then because they knew they were going to have to leave soon, so it wasn’t nearly as bad as this closing up,” Adams said.

That brought up something Adams said he was curious about: How did the school district reach the decision to close Jennie Rogers?

Kelly said there were numerous proposals submitted for how to reorganize the district. She initially voted for a plan to sell Edna L. Toliver Elementary to Centre College. Ultimately, though, the district landed on the current plan: Renovate Toliver Elementary and send all second-, third-, fourth- and fifth-graders there; and use Mary G. Hogsett Elementary for preschoolers, kindergartners and first-graders.

Kelly said it took three or four years to get the entire school reorganization plan figured out. The difficult part of that plan was that one of the three elementary schools in the district needed to close.

“I think people were not happy. It didn’t matter if this school was closing, or Hogsett, or Toliver — one of them was getting cut,” she said. “… The state had encouraged it because 300 (Jennie Rogers’ current enrollment) is considered a small school. Even being 300, we’re still expected to do the same things that the larger schools are supposed to. And we want our kids to have those same kinds of opportunities and advantages.”

“And I think there are only two of us who can say that — that we were both places,” Adams said.

“I don’t think I have all of your experiences though — like you were saying, the campus was all over town and in churches,” Kelly said.

“Yes, that was an ordeal,” Adams responded. 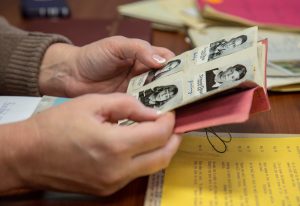 Ben Kleppinger/ben.kleppinger@amnews.com
Robin Kelly looks through a book saved by Earl Adams, showing students in his very first class from the late 1940s.

Among his documents from his time at Jennie Rogers, Adams has a slip of “thoughts for the day” — short, inspirational quotes he would share with students each day.

“I’m a great believer in luck, and I find the harder I work, the more of it I have,” reads one of the quotes from Thomas Jefferson.

“Give what you have,” reads another quote from Henry Wadsworth Longfellow. “To someone, it may be better than you dare think.”

Kelly made a copy of Adams’ sheet and said “we might end like we began” with thoughts for the day.

As they wrapped up their half-hour together, Kelly asked Adams, “Do you have any advice for me on how to bring my staff together?”

“I wouldn’t attempt to advise you,” Adams said, chuckling. “I’m so far behind as far as all the technology and stuff. We had one computer when I retired. It was in the library. We were just getting into the computer age.”