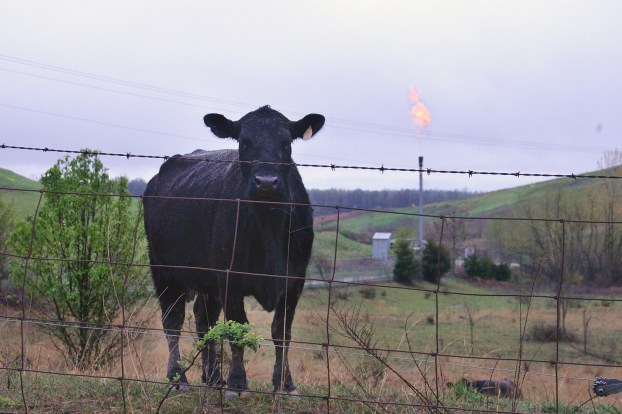 Tri-K Landfill is seen in the background, behind a farm on Ky. 3249 in Lincoln County. It sits on almost 648 acres, and looks more like rolling hills around a valley than it does a dump.

‘Too technical to be a dump’

Even if you recycle as much household waste as possible, there is still garbage to be gotten rid of — like plastics that aren’t recyclable, frozen food containers, greasy pizza boxes, buckets, paint cans, Styrofoam containers, broken chairs, chipped dinner plates, ruined shoes, worn out bedding …

Once you take it to the curb for a trash company — like Republic Services — for pick up, or drop it off at one of Boyle County’s six convenience centers, where does it go?

Kaye Brown, landfill operations clerk for Republic Services’ Tri-K Landfill, said most people don’t ever think about their trash once it’s out of sight. 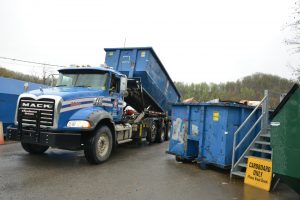 At the Gose Pike convenience center, a Republic Service truck driver loads a full container of cardboard to be hauled to the Boyle County recycling center. On another run, the driver will pick up a loaded compactor container and take it to the Tri-K Landfill in Lincoln County.

It’s no longer their problem.

But it has to go somewhere, said Kevin Kirkpatrick, Tri-K’s operations manager. And somewhere is the almost 648-acre landfill in Lincoln County.

The landfill operation began in the 1970s by Kirkpatrick’s dad, uncle and grandfather when he was 2 years old, so he’s seen how trash disposal has evolved over the years.

Back then, it was just a plain, old dump. A place where people dumped their trash where it rotted, blew away or just laid on top of the ground forever.

Today, because of federal and state regulations (state rules are a bit more stringent than federal, Brown said) the landfill almost appears to be enormous rolling meadows. Yellow pipes stick out of the hillsides, water tanks are located down hill and small ponds are on the edges of the property. Also, there are mountains of paperwork, documentation and geological mapping that track each and every load of trash and where it is buried.

Thirty years from now, if a company needs to recover a specific load of trash for some reason, Kirkpatrick said they can pinpoint its exact location and tell the company it’s 40 feet down.

During a tour of the area, Kirkpatrick maneuvered his large white pickup truck through the landfill’s muddy roads that splashed like thick brown soup on a recent rainy day. He stopped next to a tall pipe jutting put of the side of a grassy hill with a flame continuously blazing.

“This flare is really important,” Kirkpatrick said. That’s what keeps the bad smell of rotting garbage from hanging over the area.

ccurring hills. They are closed cells of tons of trash.

A cell, Kirkpatrick explained, can be an area between one to 10 acres where trash is to be dumped. And it’s very expensive to set up a cell — about $1 million, Brown said. And it’s expensive to close a cell when full of trash, which can be at least another million dollars, she said.

When the company opens a new cell, Kirkpatrick said the area has to be excavated and lined with three feet of clay; then a layer of GCL (geosynthetic clay liner), three layers of 60 ml pl

When the cell is full, plastic liners are placed to cover the area and all the seams are welded together, Kirkpatrick said. Finally, a thick layer of dirt is brought in to cover the entire space and grass is planted. But, “You can’t have trees on a landfill. The roots will penetrate the liners,” Kirkpatrick said. “It’s like Tupperware. Nothing gets in and nothing gets out.”

However, engineers have designed a system where the methane g

as produced from rotting garbage and contaminated water inside the cell can escape and be dealt with.

Kirkpatrick explained an intricate substructure of connecting pipes under the massive hills of dirt-covered trash, with fans above ground, help suck methane fumes through the system to to be burned off.

And, Brown said engineers are also always expanding the network of pipelines to get rid of the methane.

Another engineering feat is a separate system that collects leachate — or contaminated water that’s constantly filtered out of the decaying heaps of trash.

A sophisticated system of more pipes carries the leachate to several tanks where it is collected. Brown said typically eight to 12 loads of leachate are hauled out of the landfill every day.

The tanks hold between 200,000 gallons to 150,000 gallons, Kirkpatrick said. Everyday, the waste water is taken to a plant in Louisville where it is treated and emptied into the Ohio River.

Engineers have also designed the landfill so that rain water is directed to one of several sediment ponds on site.

Tri-K landfill accepts garbage from 42 Kentucky counties and many industries and companies, but doesn’t accept hazardous waste or anything from out of state, Brown said. This amounts to about 300 to 350 tons of trash every day being dumped at the landfill.

The process of handling that amount of trash everyday is also very labor intensive, Kirkpatrick said.

Employees use backhoes and bulldozers to cover the mountains of trash with dirt at the end of every day. Then, about 130-foot tarps are placed over the fresh dirt. This helps to keep out vermin and keeps the trash from blowing all over the place, Kirkpatrick said.

“We’ll run out of dirt before we run out of trash,” Kirkpatrick said laughing.

In the mornings, the tarp is removed, dirt is pushed off and the process begins again. On windy days, dozers shove tall metal cages, that resemble oversized soccer goals, around to catch lighter-weight trash from blowing away.

Brown and Kirkpatrick said specialized surveyors keep track of the landfill’s expansions every month by flying over the area and using computerized equipment. And engineers are always planning for more water and gas pipelines to help keep the landfill functional, safe and in compliance with regulations.

Brown said, “It’s not an old-fashioned dump. It’s too technical to be a dump. It’s a landfill.”

At the Gose Pike convenience center, a Republic Service truck driver loads a full container of cardboard to be hauled to the Boyle County recycling center. On another run, the driver will pick up a loaded compactor container and take it to the Tri-K Landfill in Lincoln County.

A sign points the direction for garbage truck drivers to go to dump their loads.

Sediment ponds and the location where fresh dirt is excavated to cover trash hills is seen on the far left side, below a hill, which is really a closed cell of garbage.

A Republic Services truck dumps a load of garbage. The green hillside in the background is a closed cell of tons of garbage. (File photo by Robin Hart)

One of many metal cages, that resemble over-sized soccer goals is on location of a dump site. On windy days these cages are pushed together by bulldozers to form a barrier to trap garbage from blowing away.

Roads cut through acres of hills of trash covered with grass, leading to other dump site areas at the Tri-K Landfill in Lincoln County.

One of several tanks that holds leachate sits below a hill.

A torch continuously burns off methane gas that has been produced from rotting garbage.
You Might Like

The Danville Ethics Board met Wednesday for the first time in about a year, setting it’s next meeting for 1:30... read more