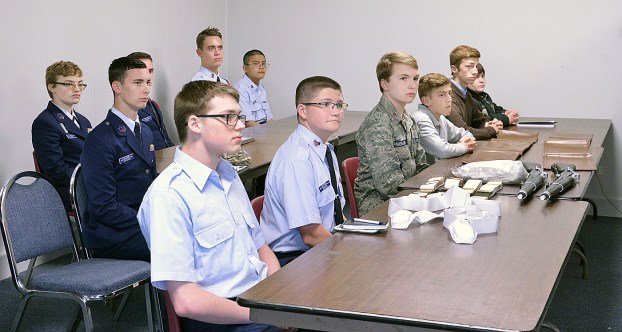 Members of the Stuart Powell Cadet Squadron 122 Civil Air Patrol listen to veterans talk about the honor of wearing uniforms and carrying the American flag at public events.

Vets make it possible for local squadron to have color guard

Thanks to area veterans organizations, the Stuart Powell Cadet Squadron 122 Civil Air Patrol now is fully equipped to have a color guard. 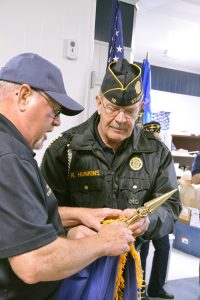 American Legion Post 18 commander Lynn Young, left, and Ron Hunkins attach a Kentucky flag to a post before presenting the honor guard equipment to the squadron.

Members of VFW Post 3634 and American Legion Post 46, both of Danville, and American Legion Post 18 of Stanford, donated nearly $650 to purchase an American flag, Kentucky flag, flag poles, stands and covers, flag belts and white gloves so that the young cadets in CAP color guard could march in parades, at veterans events and before ballgames throughout the year. Two parade rifles were donated from an ROTC squadron that has disbanded.

When the veterans groups presented the squadron with the equipment Tuesday evening, Jack Hendricks, member of the VFW and a Boyle County magistrate, said the local CAP wanted to have an honor guard, but they didn’t have the funds to purchase all of the equipment.

“These kids really impressed me,” Hendricks said. “It was something we needed to do.”

Squadron commander 1st Lt. Nick Birt said cadets have to go through many hours of training before they can properly present the colors. Two cadets already have the training, Birt said. And two more are attending an honor guard academy at Ft. Picket, Virginia in July.

Birt said, “Any time you get to honor veterans is a big deal,” for the cadets. And tonight, the veterans were honoring the cadets with a gift of color guard equipment. “It’s a huge deal,” Birt said.

Hendricks told the group, “They have provided you with a great honor.” Now it is up to the cadets to practice the drills and “carry the colors with respect for the uniform, flag and the Civil Air Patrol.” 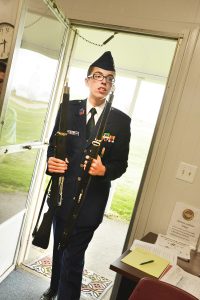 Hendricks said, “We’re proud of you, that’s why we’re doing this.”