Hebert has been cadet commander of the KY122 Danville Cadet Squadron and the KY222 Lexington Cadet Squadron. Campbell has been accepted into the U.S. Air Force Academy. 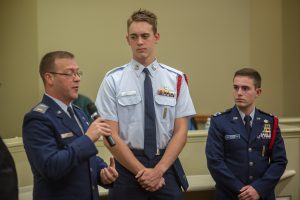 Lt. Nathan Gooch, commander of the Danville squadron, said Hebert is one of only 15-20 cadet majors in the entire state. And there haven’t been more than “probably a handful” of Civil Air Patrol cadets in Kentucky who have gone on to the Air Force Academy, “so that is a huge deal.”

“I almost get a little teary-eyed when I think about these two guys,” Gooch said. “They embody everything that we want our young people to be.”

Campbell said after deciding he wanted to attend the Air Force Academy, he then discovered the Civil Air Patrol. And as luck would have it, the Danville squadron was in the process of opening up just five minutes from his home. His experiences as a cadet have helped him enormously, he said.

“That’s what’s really made an impact on me through this organization — being able to be involved with some people that I wouldn’t have met otherwise and being able to get out and make a difference through our volunteer service,” he said.

Hebert said Civil Air Patrol “has been probably the biggest impact on my life as a young teenager.”

“This program has taught me so much,” he said. “It’s gotten me out of my shell.”

Mayor Mike Perros presented both cadets with plaques honoring their achievements Monday, and the commission unanimously approved proclamations congratulating them on their accomplishments and urging residents to do the same.

Perros said the late Stuart Powell, who is credited with making the Danville-Boyle County Airport what it is today, would be happy with the success the local Civil Air Patrol squadron is having.

“I remember Stuart saying many times when he and I would talk, he’d say, ‘If I could just get a cadet program out at the airport, that would be my greatest accomplishment.’ He said that to me on at least three occasions that I can recall,” Perros said. “I can’t help but believe that Stuart is as proud as punch.”

‘Too technical to be a dump’ Even if you recycle as much household waste as possible, there is still garbage... read more